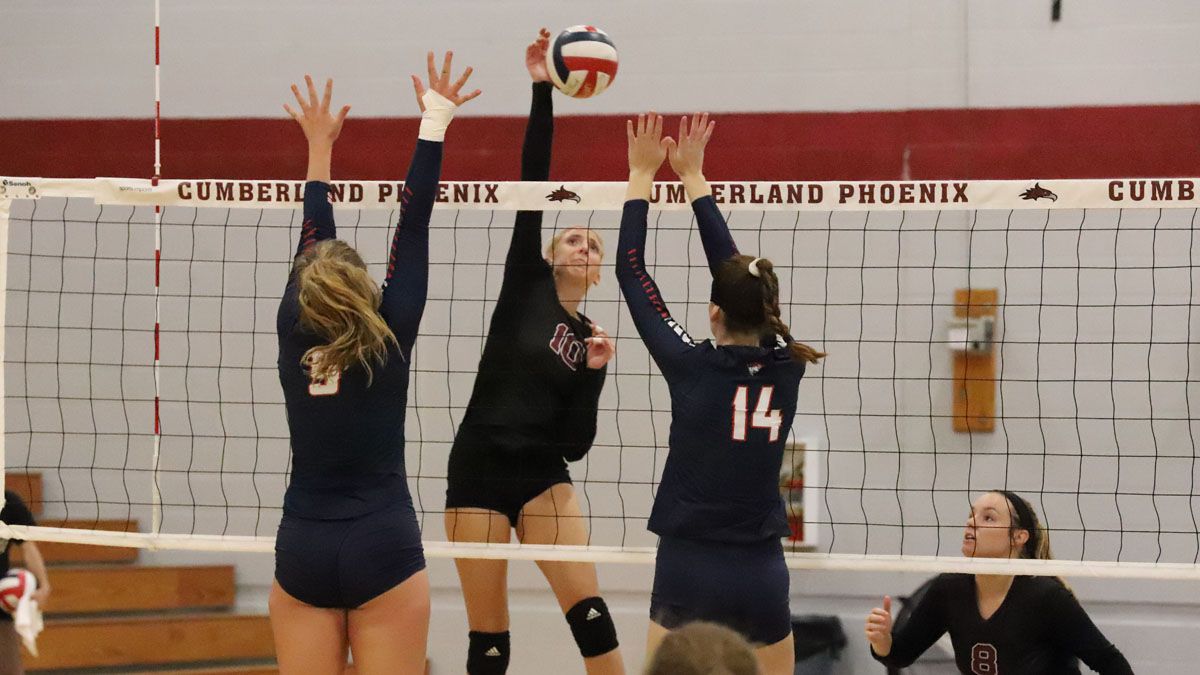 LEBANON, Tenn. – Masa Nalovic registered 17 ki9lls and Mikayla Wickham added 12, as Cumberland fought back from a set down and nearly forced a fifth set before dropping a 3-1 decision to the University of the Cumberlands in women’s volleyball action here Tuesday night.

Ali Hanger provided a season-high 20 kills despite a nasty collision with Abby Akins in the third set and Sara Glassman and Sadie Edmonston combined for 46 assists for CU. Edmonston registered 11 digs for her third double-double of the year.

Akins registered three of her six kills in the opening set and a block by Raegan Moeller and Nalovic helped the Phoenix to a 10-6 edge, but the Patriots scored the next six points behind kills from Megan Jackson, Lily Chapman and Leah Crist and two errors by CU.

Nalovic posted four kills in the next nine total points in the match, but blocks from Crost and Chapman and then Crist and Mackenzie Koch kept the Patriots in the lead. Koch’s kill and service ace made it 20-16 UC and Crist and Lynsey Short provided the final point with a block for a 25-19 first set for the Patriots.

The teams went back-and-forth in the second set, with two kills apiece for UC’s Koch and Ashley Sobocinski, but Cumberland answered with a block from Wickham and Luciana Arena as well as kills by Akins and Nalovic to even the set at nine.

Nalovic’s kill plus a solo block from Moeller and then a block by Moeller and Nalovic made it 12-9 CU. Hanger added a service ace and Moeller collected one of her seven kills in the match before another spike by Wickham increased the lead to 17-11 Phoenix.

Wickham and Arena combined for a block and Nalovic recorded two more kills before the final spike from Wickham ended the set for Cumberland, 25-18.

The Patriots put together an 8-0 spurt early in the third set led by two kills from Jackson and two service aces by Sobocinski for a 14-6 advantage. The Phoenix chipped away at the deficit thanks to Moeller, Arena and Akins and Nalovic added two spikes, making it 16-11.

Kills from Wickham and Nalovic forced a timeout from the Cumberlands and Lyssette Serna collected a kill before a beautiful set attack from Edmonston got another timeout from the Patriots with the visitors clinging to a 19-18 edge.

Wickham answered a Sobocinski kill but too many errors by the Phoenix was too much to overcome, with Chapman collecting the final point for the Patriots, 25-21.

The final set followed a similar script to the third, with the Cumberlands jumping ahead early thanks to kills from Koch, Crist and Chapman as well as a block by Crist and Chapman. Three straight errors by CU and a service ace from Sobocinski put the Patriots ahead, 12-7.

Again Cumberland fought back with the help of three kills from Nalovic, but errors at inopportune times hurt the Phoenix. Three straight by the home team pushed the Patriots lead to 17-11.

Cumberland scored eight of the next 10 points, though, to even the set at 19, with two kills each for Moeller and Wickham and one by Arena forcing a timeout from UC. Arena registered two kills and Nalovic posted one, but four errors kept the Patriots in the lead.

Jackson and Short recorded kills for UC, but Arena’s second kill tied the set at 23 before Hanger’s service error gave the Patriots match point. Koch finished off the match for the visitors with a final kill.