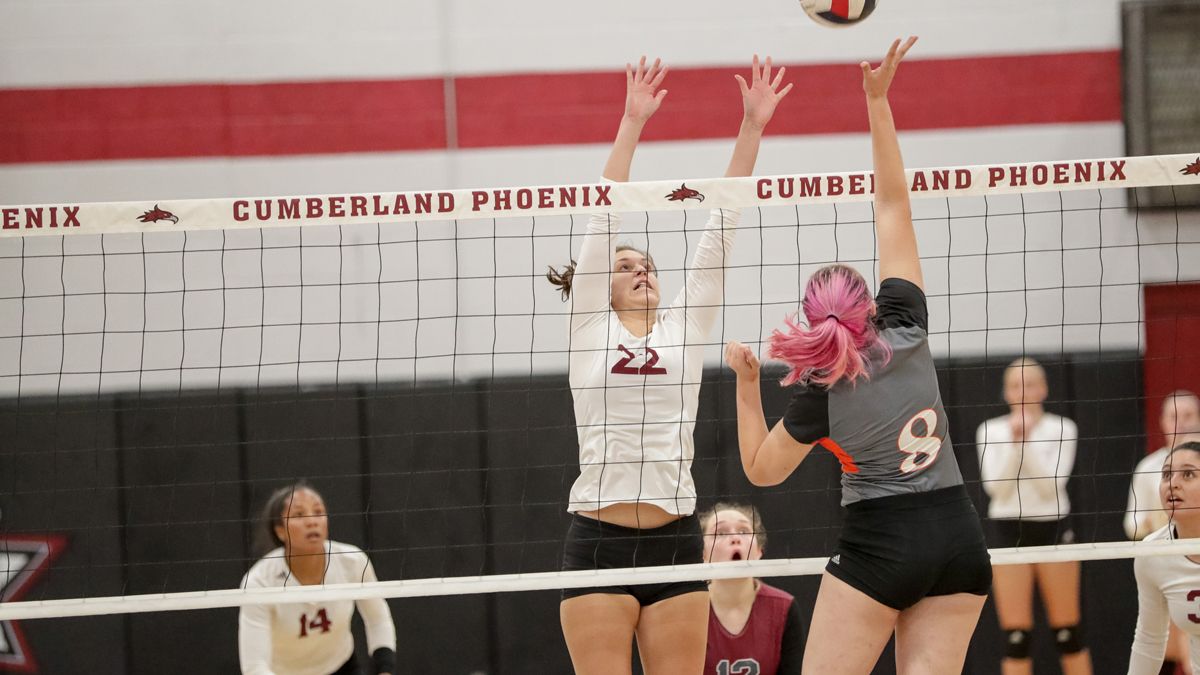 Nalovic collected eight kills and Edmonston posted 11 digs but Oklahoma City recorded 18 blocks in a Stars sweep on Saturday morning against the Phoenix.

Cumberland jumped to a 9-2 lead against St. Louis College of Pharmacy in the opening set behind three kills from Nalovic and two by Nicole Carey. Arena’s solo block and four errors from the Eutectics along with a block by Carey and Lyssette Serna increased the CU advantage to 17-4.

Raegan Moeller and Nalovic each posted two blocks early in the second set, giving CU a 9-5 edge. Nalovic added two more kills and Moeller and Arena recorded one apiece, stretching the lead to 18-13 and forcing a timeout by the Eutectics.

St. Louis College of Pharmacy registered 13 of the final 19 points of the set from that point forwar, starting with a kill from Aften Richter. Kills by Mikayla Wickham, Carey and Serna kept the Phoenix in the lead, with Serna’s spike putting CU ahead, 22-19, but a block by Cassady Reno and Richter and two final kills by Reno provided a 26-24 set win for STLCOP.

The Eutectics kept the momentum early in the third set as well, with two kills from Reno and one by Sierra Sagucio giving the home team a 5-2 advantage. Wickham, Nalovic and Arena tallied kills for CU, which chipped away at the deficit and tied the set at nine on a block by Wickham and Carey.

Two kills from Nalovic and a block by Carey and Moeller made it 16-11 Phoenix and Cumberland increased the lead from there thanks to kills from Moeller, Nalovic and Arena as well as two service aces by Edmonston. Arena and Wickham posted the final two kills in a 25-16 set victory for CU.

Arena started the final set with three kills in the first five Cumberland points and Serna and Carey added spikes for a 9-6 CU advantage. Carey’s solo block and kills by Serna and Nalovic made it 12-8 Phoenix.

The Eutectics tied the set at 12 but Nalovic answered with two kills and Wickham and Arena added a block, setting in motion a 13-2 spurt to end the match. Wickham collected two kills and Serna, Arena and Carey recorded one apiece during the run, with CU taking the set, 25-14.

Two blocks by Nalovic and Serna and kills by Arena and Wickham helped CU even the first set at six against Oklahoma City. Carey, Serna and Moeller added kills and Carey posted a solo block for a 12-11 deficit.

Marijana Bjelorbk collected a pair of kills and the Stars got three straight blocks for an 18-12 OCU advantage. Kills from Nalovic and Carey pulled CU within 20-16, but two kills by Kenady Bertling ended the set for the Stars, 25-17.

Oklahoma City jumped to a 9-2 lead in the second set behind two kills from Ella Lofton, one each from Bjelorbk and a block by Bertling and Lacy Beeler. Cumberland never got closer than five the rest of the set despite three kills from Nalovic and two apiece by Moeller and Serna. The Stars posted three blocks and Lofton added three kills in the final 10 OCU points for a 25-14 set win.

Nalovic helped the Phoenix start strong in the third set with three kills in the first four CU points and Wickham and Moeller recorded a block. Serna collected a kill and Nicole Carey posted two service aces for a 9-5 CU advantage.

The Stars called timeout and promptly put together a 7-3 spurt to even the set at 12, including two service aces from Taylor Horton and kills by Bjelorbk and Horton. Wickham registered two kills and Nalovic and Carey had one apiece to keep the set tied.

Bjelorbk and Lofton tallied two kills each during a 5-1 run for a 20-16 OCU edge. Beller recorded two kills and Horton added one to finish the match for the Stars, 25-20, in the set.

Cumberland plays next weekend at Shawnee State on Friday and the University of Pikeville on Saturday.