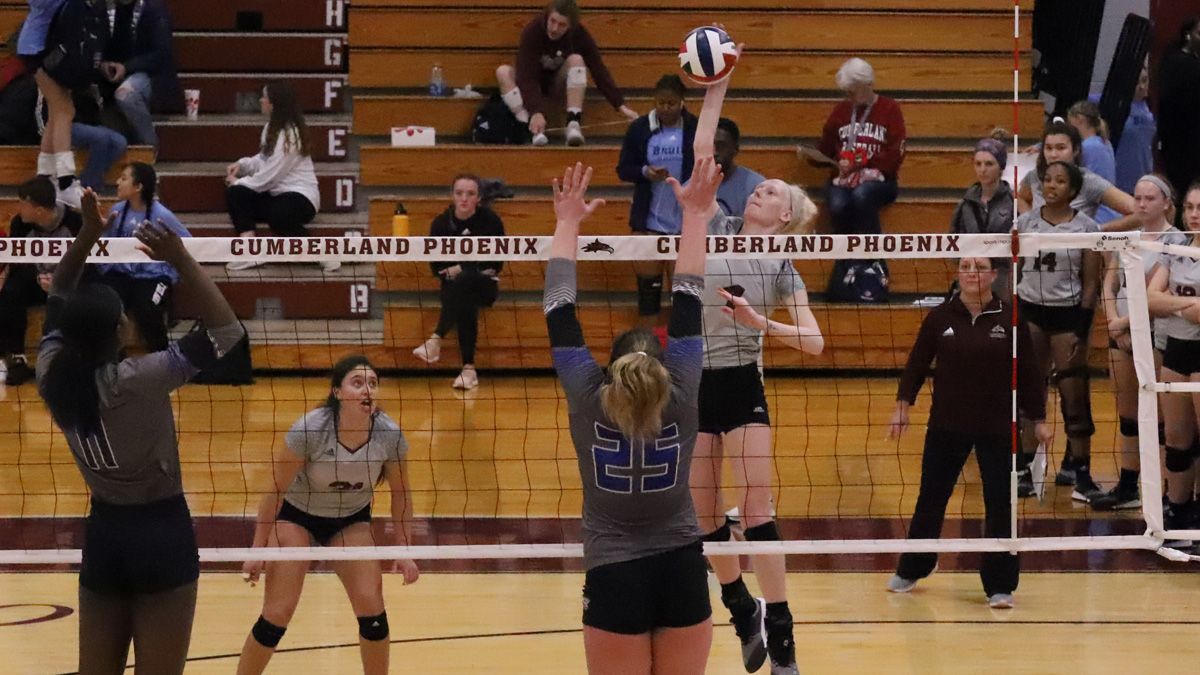 Cumberland plays again at 4 p.m. against Union College and takes on Reinhardt University and Bluefield College on Saturday in the event.

The Phoenix hit .287 for the match, including .562 (10 kills, 1 error in 16 chances) in the second set, holding off the Bulldogs in the first set before taking early leads and finishing off the final two.

it marked the 11th double-figure kill outing in the last 13 matches for Nalovic, upping her season total to 281, 2.93 per set.

Nalovic collected three kills in the first four points to open the match for CU and Wickham, Luciana Arena and Lyssette Serna added kills for an 8-6 edge, but three consecutive kills in the middle of the set for TWU’s Sydney Ritten put the Bulldogs ahead, 13-12.

Wickham answered with a spike to even the score and the teams were tied at 15 after a kill by TWU’s Avery Hilliard. Marjorie Smith’s spike for the Bulldogs evened the set at 17, but a kill by Serna and two straight attack errors by Wesleyan gave the Phoenix a three-point advantage.

Smith’s kill and two errors from Cumberland evened the set at 21, but kills by Nalovic and Wickham put CU in front for good. Nalovic added another before Serna’s final spike and a 25-23 first set win.

Carey and Nalovic recorded two kills each and Serna collected three service aces, giving the Phoenix a 9-1 lead to start the second set. Nalovic, Wickham and Serna netted kills, extending the advantage to 14-5, and Nalovic and Carey combined for a block and a 16-7 lead.

Smith posted two kills and Allana Knowles added one for Wesleyan, getting the Bulldogs within 18-10, but Wickham ended the TWU spurt with a kill and Sadie Edmonston tallied two service aces, forcing a Bulldog timeout. Arena and Arena recorded the last two kills for Cumberland in a 25-12 set victory.

Carey collected three kills to start the final set and Serna added another service ace, one of five in the match. Nalovic and Serna registered kills for a 6-4 CU edge and kills by Serna and Carey and a service ace by Kayla Rodrigues made it 9-6 Phoenix.

Serna’s kill and service ace and two errors by the Bulldogs started an 8-2 run for Cumberland. Nalovic registered two kills, Wickham posted one and Ali Hanger added a service ace for an 18-10 CU lead.

Wesleyan answered with six straight points, including two kills by Knowles and two service aces by Kylie Hatfield. Ritten collected a kill and combined with Hilliard for a block, getting TWU within 18-16.

Wickham ended the stretch with a kill but a block by Maura Emert and Hilliard and a kill from Hilliard kept it a two-point game. The Bulldogs committed two errors and a service ace by Rodrigues ended the match for CU, 25-19.