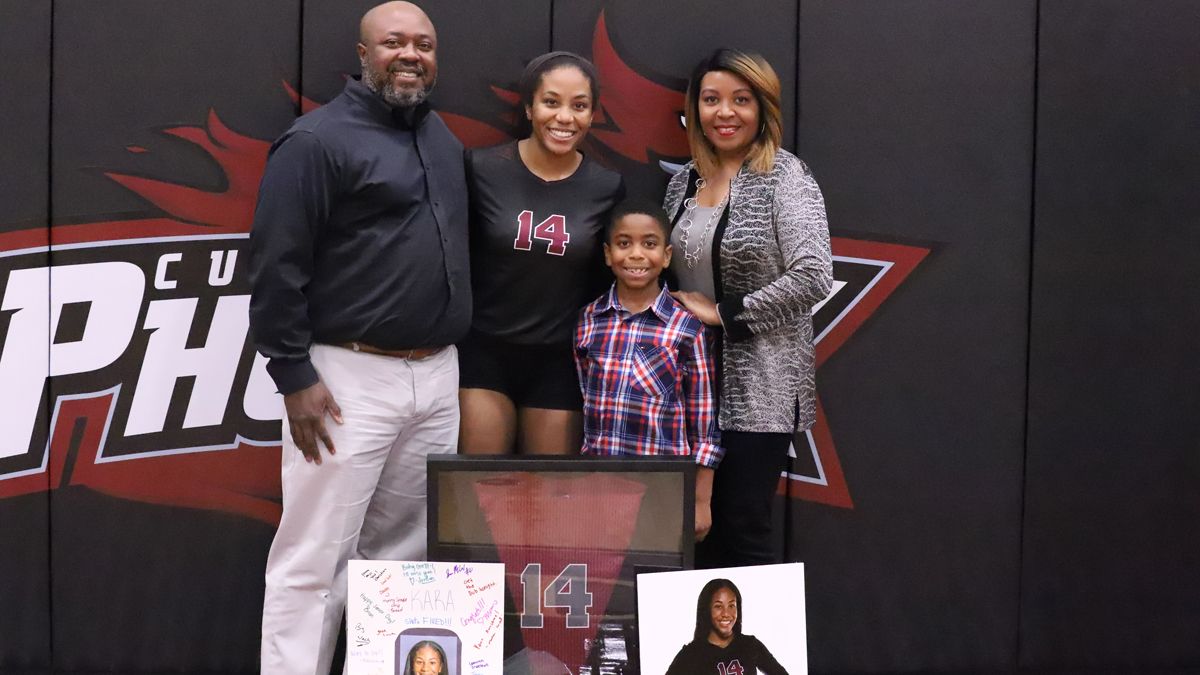 The Phoenix (16-16, 6-7 Mid-South) end the regular season Thursday at Georgetown College before taking part in the Mid-South Conference Championships next week in Bowling Green, Ky.

The teams split sets before Campbellsville (20-8, 11-2) won the final two, holding off the Phoenix in the last set, 30-28. Three Tigers finished with double-figure kills and Paige Merrick dished out 46 assists in the win.

Sonia Flendrich and Maria Coelho each posted two kills for a 7-3 Tigers lead in the opening set before kills by Wickham, Nicole Carey and Abby Akins pulled the Phoenix within 9-7. Kills by Flendrich, Coelho and Savannah Moss as well as a block by Julia Fonseca and Coelho extended the Campbellsville advantage to 15-10.

Blocks by Flendrich and Yelysaveta Sharkova and then Merrick and Sharkova made it 21-13 Tigers and the visitors won the opening set, 25-16.

Cumberland rebounded in the second set, though, but the Tigers held the early edge thanks to kills from Fonseca, Flendrich and Coelho and two service aces by Jaimie Thompson. The Phoenix countered with kills from Nalovic, Carey and Luciana Arena as well as a block by Arena and Nalovic.

Campbellsville led 11-9 after kills by Sharkova and Flendrich and a block by Fonseca and Flendrich. Cumberland finally got the set even at 16 with kills from Nalovic, Akins and Arena as well as a block by Carey and Cheyenne Corey. Sara Glassman’s service ace evened the set at 19 for CU and the home team scored nine of the final 12 points of the set after trailing 19-16.

Carey and Wickham posted kills and combined for a block for a 21-19 edge and Wickham and Serna added kills down the stretch before a Campbellsville error ended the set with a CU win, 25-22.

Cumberland held the upper hand for the first half of the third set thanks to three kills from Nalovic and two by Arena. Carey and Wickham and then Nalovic and Carey combined for blocks and the Phoenix held a 12-8 advantage after a kill by Akins.

Nalovic and Arena and Serna and Arena posted back-to-back blocks for the Phoenix, with CU getting as close as 21-19, but kills by Johnson, Sharkova and Flendrich finished the set for the Tigers, 25-21.

Campbellsville won the first five points of the fourth set and led 16-10 at one point. Coelho recorded three kills and Flendrich added two, but the Phoenix continued to fight thanks to kills from Wickham, Serna and Carey along with a block by Carey and Nalovic. Three straight attack errors by Cumberland gave the Tigers the 16-10 advantage.

Campbellsville returned the favor with three consecutive errors, starting a 6-1 CU spurt that included a kill by Nalovic and blocks from Wickham and Arena and Nalovic and Arena. Cumberland finally got the set even at 21 on kills by Wickham and Serna and a block by the duo as well.

A kill by Akins gave the Phoenix its first lead of the set and kills by Nalovic and Carey kept it tied at 24 and 25, respectively. Carey, Akins and Arena kept Cumberland in the set with spikes, off-setting one-point Campbellsville leads, but the Tigers finished the match with a kill by Flendrich and a CU error, 30-28.

Flendrich led the Tigers with 16 kills while Coelho netted 11 and Sharkova registered 10. Thompson tallied 22 digs, Merrick recorded 15 and Flendrich had 14 as well.