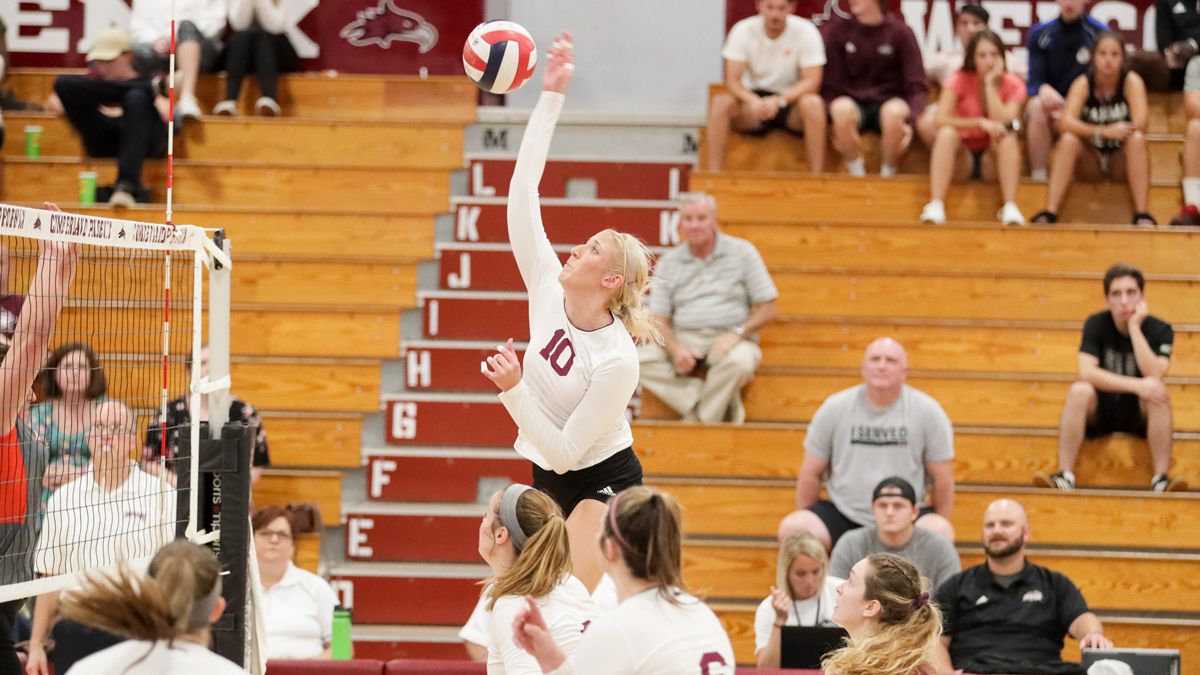 NEW ORLEANS, La.-- Cumberland women’s volleyball started its season off with a win, pulling out a nail biter versus Xavier in five sets before falling to fifth-ranked Viterbo, 3-1, today at the Early Bird Invitational in New Orleans.

The first game saw seniors leading the way for the Phoenix. Lyssette Serna picked up a double-double with 13 kills and 11 digs, while Masa Nalovic and Mikayla Wickham chipped in 15 and 13 kills, respectively. Bianca Rodrigues led the team in assists with 23 in her first collegiate appearance.

Kayla Black was a force for Xavier, leading both teams in total kills with 18, while Eva Le Guilou collected a staggering 53 assists.

The Phoenix went back and forth with the Gold to start the first set, trading points until at eight all, when back-to-back Xavier errors helped the Phoenix to a lead they would not relinquish over the rest of the set. Sophomore, Nicole Carey, went on to secure the first set, earning the final three kills for Cumberland’s 25-20 first set win.

The second set was a near perfect repeat of the first, neither team showing a true advantage until the Phoenix broke away for good on a Nalovic kill at 11-9. Although Xavier stayed relatively close the rest of the set, Serna followed her own ace with a kill to take a commanding five-point advantage. The set ended on a service error by Xavier’s Jaida Dowd.

Xavier charged back from its 2-0 set deficit, forcing a fifth set by winning both the third and fourth. A Wickham kill pulled CU within two, 14-12, but that was as close as the Phoenix would get in the third set. Cumberland took a short lead midway through the fourth off a Luciana Arena block, Serna ace, and Nalovic kill, but could not maintain that momentum.

The Phoenix pulled themselves back from the brink in the fifth, taking the first point of the set off a Nalovic kill assisted by Rodrigues. Serna collected four kills during the set, helping Cumberland to close out the match with a season opening win.

Nalovic and Wickham continued their strong play from the first game against No. 5 Viterbo, earning 11 and 10 kills, respectively.

On the opposite side of the court, Miah Garant collected 24 kills en route to a V-Hawks victory.

After a delayed start to the game, Cumberland went through the first set like it had not missed a beat from its first match. Wickham played an excellent set, striking five kills, helping the Phoenix clinch the first set 25-20.

The Phoenix failed to replicate their first set success, falling in three straight sets to No. 5 Viterbo.

Cumberland gave the V-Hawks everything they could handle in the fourth. CU jumped out to a 5-1 lead off of a B. Rodrigues ace, managing to stay neck and neck with No. 5 Viterbo over the set. Cumberland took its final advantage of the game when Victoria Johnson assisted a Serna kill to bring the game to 28-27, but an attack error and Adrianna Reinhart service ace for the V-Hawks ended the match.

The Phoenix return to action tomorrow, finishing off its season opening tournament with matches against Coastal Georgia and Loyola (La.) at 10am and 2pm.