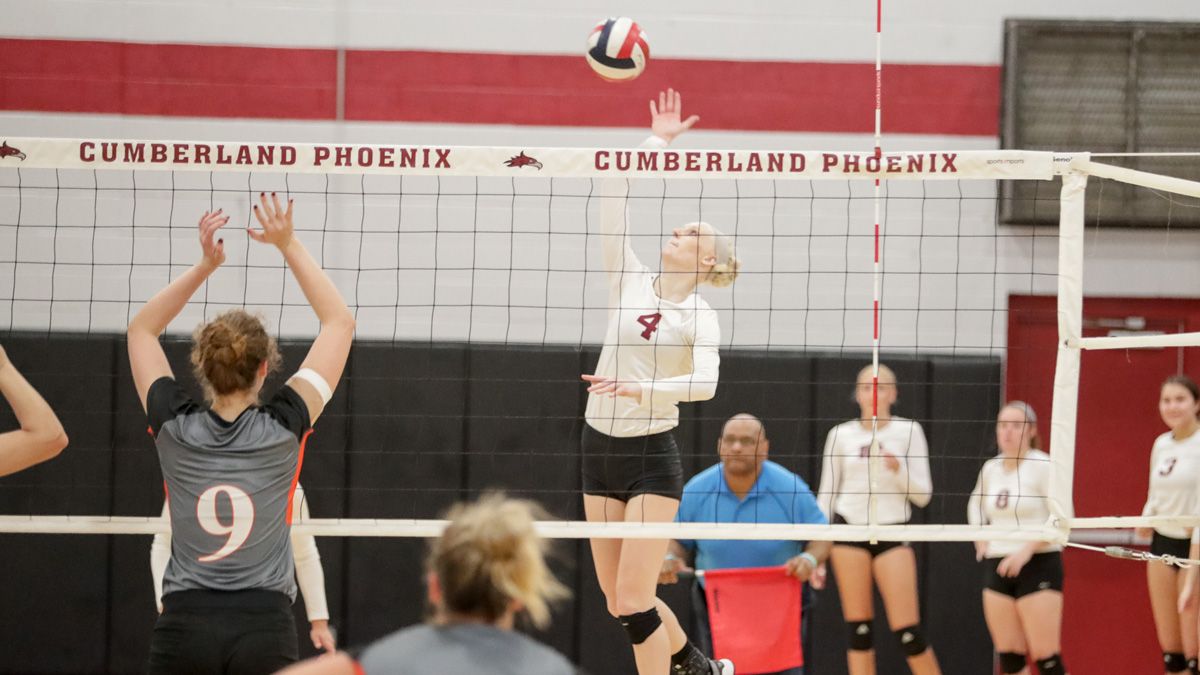 Cumberland (2-2) made a good showing at the Early Bird Invitational to start its season, leaving the strong field with a .500 overall record. Today's opponents Coastal Georgia (1-2) and Loyola (N.O.) (1-2) each have one match left before the tournament finishes.

Senior, Abby Akins led the way for the Phoenix against Coastal Georgia, collecting 10 kills on a .318 hitting percentage, while Mikayla Wickham had her third straight double-digit kill game with 10 as well. Victoria Johnson contributed a game leading 20 assists.

The Mariner’s point leader was Adair Werley with seven kills while hitting .308.

In the first set, Akins, Wickham, Lyssette Serna, and Nicole Carey struck three kills each to help the Phoenix control the advantage throughout the set. Coastal Carolina took its largest lead of the game at 15-13 off of a Sam Kepler kill, before Cumberland rattled off seven-straight points. Sadie Edmonston finished the set with an ace off of the hands of the Mariner’s Keelin Pilgrim.

The Mariner’s managed to take a 6-5 lead early in the second, but a Wickham kill from Johnson gave Cumberland a piece of the lead that they would not relinquish. Serna expanded the lead to six, 23-17, after a kill assisted by Rodriguez, and then ended the set, 25-20, with yet another powerful kill.

Cumberland battled through the third set, exchanging the lead four times. Coastal Georgia made a charge to try and force a fourth set, taking a two point lead late in the set with Kepler’s kill, 18-16. The Phoenix pulled through though, winning the set and match off a Serna service ace that Coastal Carolina’s Madie Bunge could not control.

Wickham recorded an early season team high for kills in a game versus Loyola, registering 17 kills while Carey chipped in 12. The freshman duo of Johnson and Bianca Rodrigues continued their early season success contributing 26 and 23 assists, respectively.

Champagne Cunningham was the kills leader for Loyola (N.O.), amassing 10.

Cumberland quickly exerted control against Loyola (N.O.) in the first set, jumping out to a 7-1 lead in large part thanks to two kills and a block from Carey. The Phoenix took the set by 10, Isabella Curcio finishing the first with a quick attack from Johnson.

Cumberland capitalized on its good play from the first set by playing nearly flawlessly in the second, committing no attack errors and possessing a gaudy attack percentage of .480. CU’s precise play earned them a quick 25-12 set win.

The Phoenix leaped out to another quick lead, 8-0, in the third set, but Loyola (N.O.) did not give up, making the third set a back-and-forth affair. Cumberland tied the set at 24 all when Serna hit her fifth ace of the game, but the Wolf Pack took the set, 26-24, off an ace by Brittany Cooper.

The momentum stayed on the Wolf Pack’s side in the fourth and fifth sets. Cumberland kept things tightly contested in the fourth, pulling within one point of the Wolf Pack at 24-23, but Loyola (N.O.) closed the set out on the next volley. The Phoenix continued struggling in the fifth set, giving Loyola (N.O.) its final four points in the match via attack errors.

Cumberland will be much closer to home next weekend, taking part in the Mid-South Conference Challenge in Bowling Green, Ky. Competition starts with two matches Friday, first against Reinhardt at 2:30 p.m., and then Union College at 7:30 p.m.