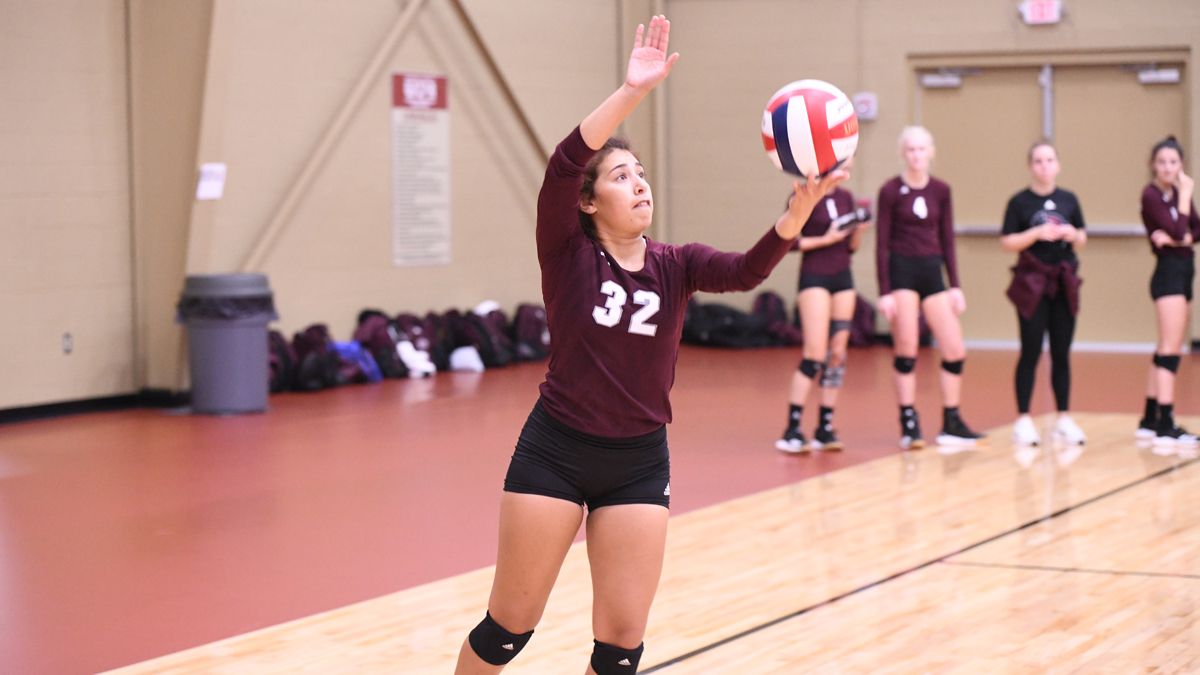 Cumberland (3-3) relied on good play from its senior hitters and freshman setters to split their matches today. Reinhardt (1-0), who is receiving votes in the NAIA preseason poll, got the best of the Phoenix, but Cumberland refocused, sweeping through Union (Ky.)(0-2).

Mikayla Wickham had a monster game for the Phoenix, compiling a team leading 12 kills in addition to six blocks. The freshman, Bianca Rodriguez, continued her strong play with 23 assists on the day.

Reinhart followed the lead of Savanna Davis who collected a game high 14 kills.

Cumberland and Reinhardt stayed tightly contested though the early portion of the first set, Serna forcing the game into a 2-2 tie early with an ace that went by the Eagle’s Tessa Colden. The Phoenix got the set back within two at 13-11 off of a Masa Nalovic kill assisted by Rodrigues. The first set ended sloppily with the teams combining for eight errors over the final 11 volleys, before Reinhardt won the set 25-16.

Seniors Wickham and Akins performed at a high level in the second set, earning six and five kills, respectively, on Cumberland’s way to a 25-23 set win. The set started with a Wickham kill from Rodrigues and finished with Akins hitting a set from Victoria Johnson through Reinhardt defenders. Cumberland had to pull themselves back from the brink in the set, down 21-19, before charging back for the win.

Serna struck a kill in the third set to give the Phoenix a 10-8 lead, but Reinhardt tallied off seven-straight points to take a commanding lead and set victory. Cumberland took an early lead again in the fourth set, but failed to keep up with Eagles, losing the match, 3-1.

Nalovic and Serna were the kill leaders for the Phoenix, earning 11 each while hitting an efficient .375 and .435, respectively. Johnson collected another game of more than 20 assists, this time with a game high 21.

Union rotated a number of players through during the course of the match, but Madison Jennings proved its strongest offensive threat, earning six kills off a .235 hitting percentage.

In the first set, the Phoenix jumped out to a quick start and never looked back, taking the lead on the first volley off a Nalovic kill and then maintaining it throughout the set. Cumberland took its largest lead of the first set 22-10, after Nalovic slammed through kills on three straight sets.

Union (Ky.) showed early success in staving off the Phoenix in the second set, tying the set six all when the Bulldogs’ Madison Jennings hit a kill through the Cumberland block. The Phoenix pulled away through the rest of the set, outscoring Union (Ky.) 3-to-1 over the final 20 volleys. Shea Moore won the set for Cumberland with a service ace, 25-13.

The Bulldogs attempted to extend the game in the third set, staying neck-and-neck with Cumberland through half of the set, but a massive eight-volley run to 20-10 put the match away. Three separate Phoenix players--Sadie Edmonston, Rodriguez, and Serna-- recorded service aces over the set. Carey Nicole and Nalovic combined for a huge block on the final volley to win the set, 25-15, and sweep the match.

The Phoenix return to action in the Vette City Volleyball Classic tomorrow, facing Indiana-Southeast at 2:30 p.m., and Blue Mountain College at 7:30 p.m.