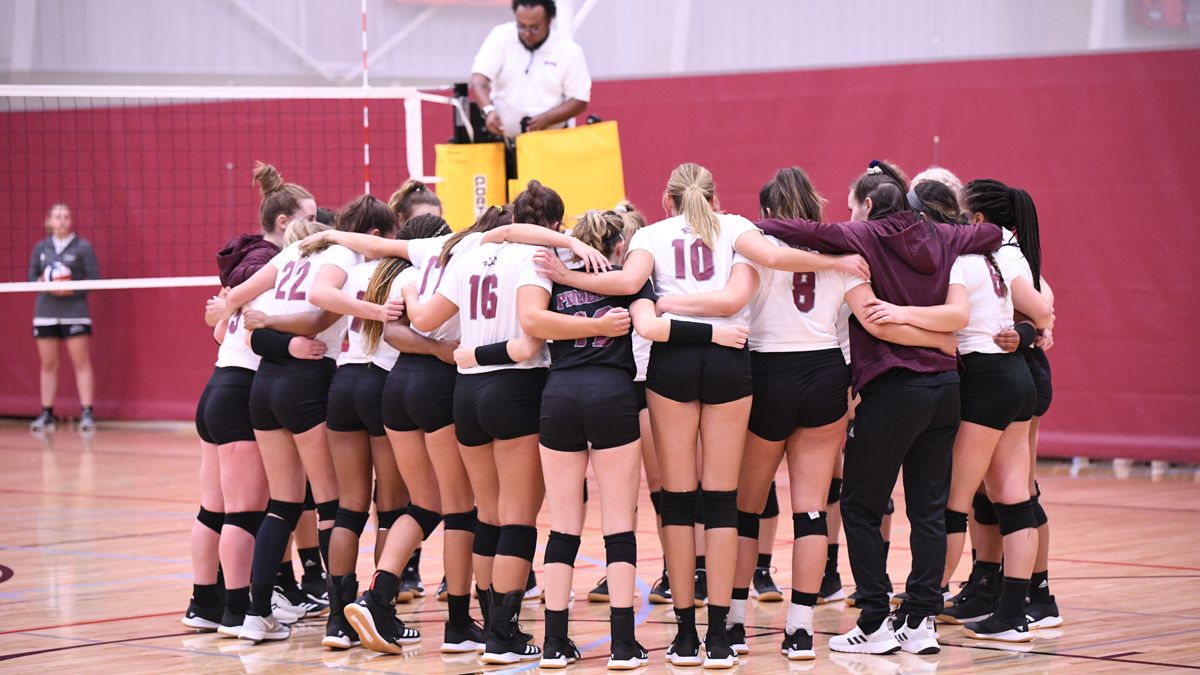 Cumberland (8-4, 2-0 MSC) extended its win streak to four today. The Phoenix relied on very clean play and a high attacking percentage, .317, to swiftly overpower Life (7-3, 0-1 MSC), before gutting out a win against a Reinhardt (6-2) that received votes in the first coaches’ poll of the year.

Sophomore Nicole Carey played one of the best matches in her young career at Cumberland, earning 11 kills with only one error on 14 attacks for a near perfect .786 attack percentage. Masa Nalovic and Lyssette Serna represented the upperclassmen, collecting nine kills each.

Zykeria Allen led the way for the Running Eagles on the day, matching Carey for a game best 11 kills.

Cumberland quickly took control of the first set, breaking a 4-4 tie when Serna hit an attack through defending Life players. Serna’s kill sparked an eight-point swing, enabling the Phoenix to take complete control of the set, 12-4. An Abby Akins kill from Victoria Johnson and unforced error from Life’s Mary Zimmerman, led to a quick, 25-16, first set win for Cumberland.

The Phoenix fought back and forth with the Running Eagles over the majority of the second set. The set was a great overall team effort from CU, collecting 20 kills to only one error for a massive .463 attack percentage. The Phoenix grabbed a share of the lead at 16 all when Luciana Arena smothered a Life attack for the solo block. Cumberland went on to win the set 25-20 off another Life attacking error.

Two straight errors by Life and a Mikayla Wickham attack put the Phoenix up 10-7, a lead that would last the rest of the match. The lead extended to as much as six when Carey struck through a kill, 21-15. Nalovic ended the set and match on a kill set up by Bianca Rodriguez.

Serna did a little bit of everything in the second game, leading the team in both kills (12) and blocks (5) while continuing her streak of games with an ace. Wickham and Carey also played well against the Eagles, Wickham gathering 11 kills and Carey getting nine to go along with five blocks.

Reinhardt’s Savannah Davis was the kill leader for the match, putting together an impressive 14.

Cumberland struggled to put together any semblance of momentum in the first set, falling to the Eagle’s quickly, 25-14.

The Phoenix managed to turn the match around in the second set. Cumberland grabbed the lead early with Sadie Edmonston serving, ending her small streak with an ace to go up 4-1. The two teams stayed tightly contested over the rest of the set, Serna and her five kills over the set playing a key role in keeping the Phoenix in the match. Serna’s kill from Rodriguez to take a 25-25 tie led to two Reinhardt mistakes and a 1-1 set tie headed to the third.

Cumberland continued its momentum into the third set, grabbing the lead, 3-2, early off a Carey and Nalovic block. Another block, this time from Serna and Arena extended CU’s lead to seven, 21-14. Serna ended the set on a well-placed ace off of the hands of Mar Vives.

In the fourth and final set of the match, Reinhardt maintained a lead up till the midway point of the set. Carey and Nalovic combined again for a block, this time on Reinhardt’s Tessa Colden to take a 12-11 lead. The Phoenix relied on three blocks over their final four points to win the match, ending on an Arena, Serna block.

Cumberland women’s volleyball returns to action next weekend at the Viking Invitational in Marshall, Missouri. Friday they play Mount Mercy at 1 p.m., and Missouri Valley College at 7 p.m.