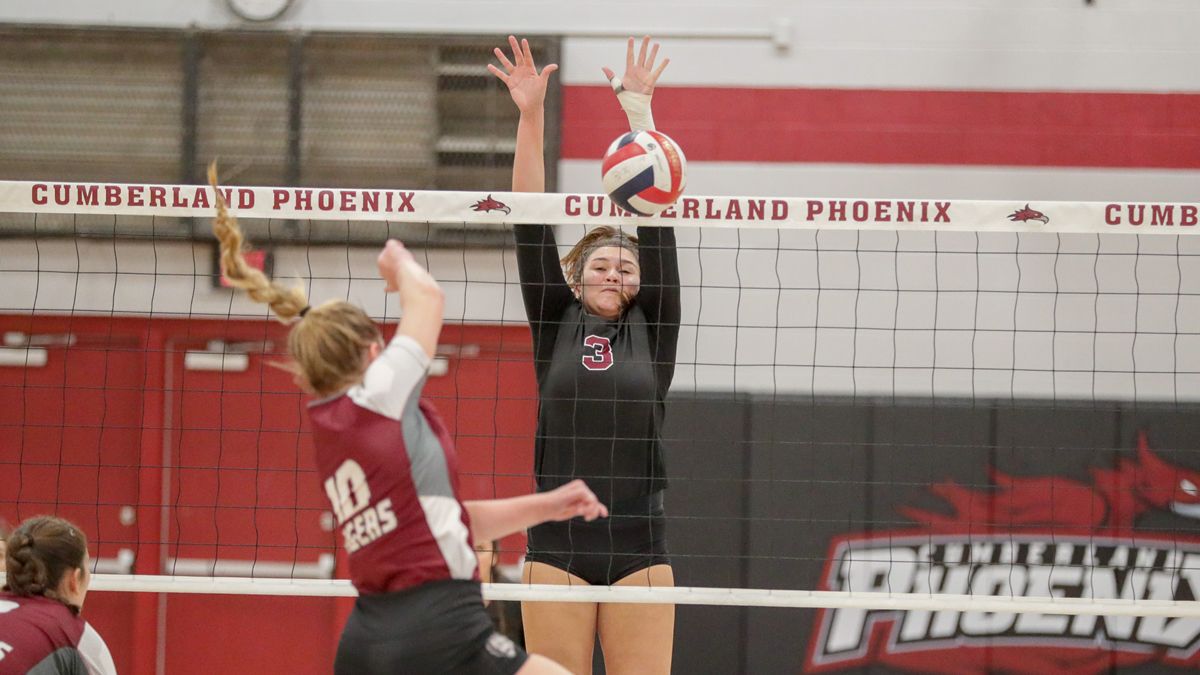 Cumberland (9-5, 2-0 MSC) fought through a surplus of errors, but was unable to keep up with Mount Mercy (9-3) in the first game of the day. In one of the final matches of the first day of the Viking Invitational, the Phoenix made short work of Missouri Valley College (0-14), the tournament’s host.

In their tightly contested first contest, the Phoenix got outstanding play from a range of players. Masa Nalovic recorded a team high 13 kills, while Nicole Carey and Lyssette Serna contributed 10 each as. Carey also recorded a game high four solo blocks. Freshman Victoria Johnson handed out a career high 36 assists.

Mount Mercy relied on outstanding play from front-line players Maddie Bell, 20 kills, and Alyssa Weldon, 17 kills, to stay one step ahead of Cumberland throughout the contest.

Mount Mercy jumped out to a quick lead in the first, holding a five point lead late in the set, 23-18. Cumberland charged back to within one, 23-22, sparked by a Nalovic kill from Johnson, but was unable to take the set. The teams fought back and forth in the second set, Cumberland taking a late lead, 26-25, off an Abby Akins kill. The teams continued to trade volleys until Mount Mercy edged the Phoenix out.

The third set played out very similarly to the second with the exception of Cumberland breaking through for the set victory. CU had some issues with attack errors over the set, but a fierce offensive attack that saw 12 kills and four aces helped Cumberland take the set, 26-24.

The Phoenix could not overcome their errors in the fourth and final set, losing the set, 25-19, and their first match in the Viking Invitational.

Mikayla Wickham led the charge for the Phoenix in their quick, three set victory over Missouri Valley, connecting for a game high 12 kills.

Lauren Nousch contributed the most kills, 6, to the Viking cause in the late match.

Cumberland could not pull away from Missouri Valley in the early portion of the first set. Back-to-back kills from Luciana Arena earned the Phoenix a 10-9 lead, and the Phoenix would not look back after that point. Cumberland won six-straight rallies to take a 25-16 set victory, Wickham grabbing three kills over the span.

The second set played out nearly flawlessly for the Phoenix, earning a .500 attack percentage with 12 kills on 20 attacks with only two errors. CU took eight of the final nine volleys of the set, winning running away, 25-14.

Cumberland proved too much for the Vikings in the final set. Errors helped Missouri Valley stay in the set until nearly the end, but four service aces over the final nine rallies ensured the win. CU broke the set open at 17-13, when Johnson served three straight through the waiting Viking players.