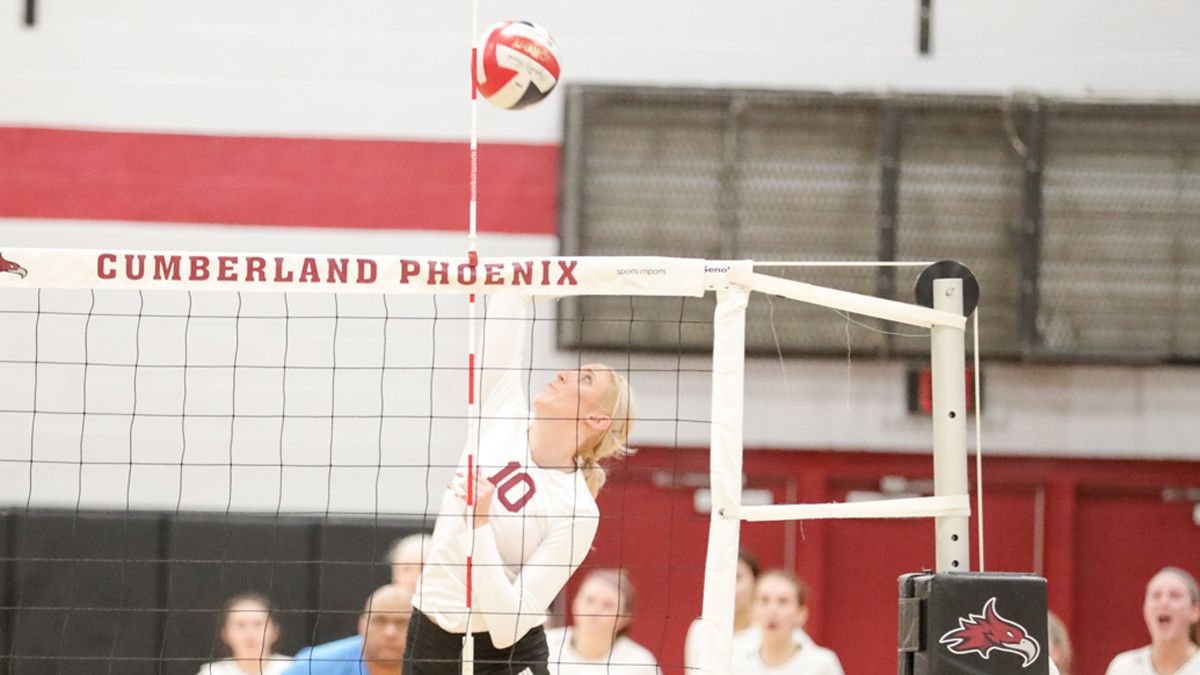 Cumberland (11-5, 3-0 MSC) relied on a near perfectly executed effort to sweep Campbellsville (11-6, 2-3 MSC), hitting a nearly .500 attack percentage on the night while the defensive block and receive also played phenomenally.

Unsurprisingly, for such a strong performance multiple Phoenix players had great nights. Masa Nalovic led both teams in kills, collecting 14 on the night while recording two blocks. Sadie Edmonston played well on the serve receive and on the serve tonight, earning four aces on the night. Carey Nicole dominated the middle, putting together eight kills on a .727 hitting percentage and a game leading five blocks..

Cumberland’s receives made it hard for the Tigers to set up the attacks they wanted to, Kymbra Kirby leading the team with five kills, while the team combined for 20 total on a .056 attack percentage.

The women volleyball team’s first kill since the Dallas Floyd Recreational Center became the Dallas Floyd Phoenix Arena was smashed through the Campbellsville block by Nalovic on the first rallie of the match. Last year, the Athletics Department raised 500 thousand dollars to renovate facilities around campus. Campbellsville quickly responded to the Phoenix, holding an early advantage until Lyssette Serna struck a kill that just stayed within the lines for a 10-10 tie. Cumberland ended the set on a 10-1 run, ending the first set with a service ace from Victoria Johnson, 25-17.

Cumberland’s run to end the first set held strong into the second set, kicking the set off with another 10-1 run. Abby Akins added two kills from the outside during the run, while Nalovic also chipped in two kills and a massive solo block. Edmonston capitalized on her serving opportunities in this set, recording three aces in the set. Carey ended the set, 25-10, with a powerful kill from the middle.

The third set opened up with the Tigers playing Cumberland close through the first half similarly to the first set. As was the case over the rest of the match, the Phoenix front line not only did a great job of boxing in Campbellsville attacks, but hitting their own attacks with enough power to either get them through the Tiger block or force block errors. Cumberland went on to win the final set 25-15, finishing the match off a Campbellsville foul.

The Phoenix stay home for their next match, facing No. 10 Lindsey Wilson within the friendly confines of Dallas Floyd Phoenix Arena Thursday at 7 pm.