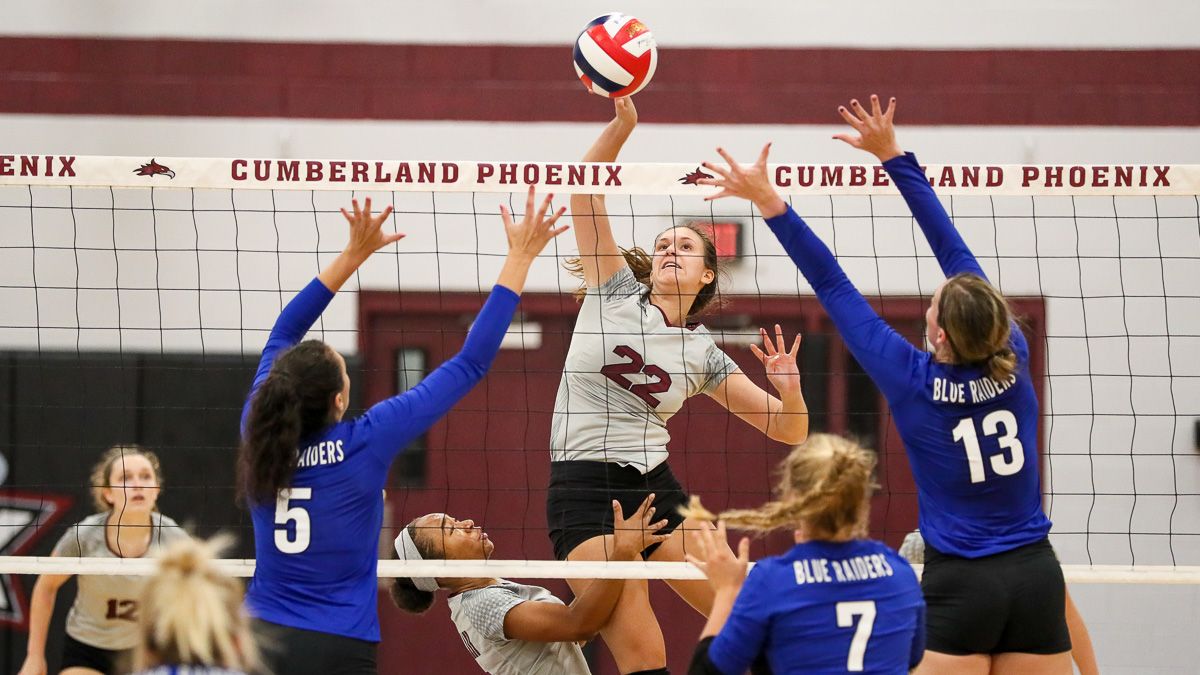 LEBANON, Tenn.-- Cumberland women’s volleyball jumped out to a quick two set lead, but was unable to hold on versus No.10 Lindsey Wilson tonight at home, losing 3-2.

Cumberland (11-6, 3-1 MSC) possesses a 1-2 record against teams that are currently in the top 10 after tonight’s match with No.10 Lindsey Wilson (11-3, 4-1 MSC), grinding out 14 sets over the matches. The Phoenix came within two points in the third set of earning their first victory over the Blue Raiders in a decade and one day.

Sophomore Luciana Arena put together an excellent game from the middle, acting as an emotional spark plug for the team particularly in the first two sets. She gave Lindsey Wilson players fits, earning two solo blocks and five block assists to go with her seven kills. Masa Nalovic was striking the ball with intensity from her outside hitter position, earning 14 kills on the night, while opposite of her Mikayla Wickham threw in another 11.

The Phoenix struck first on the night, Lyssette Serna striking a kill off the hands of the Lindsey Wilson block. As was the case for much of the game, the team’s fought back-and-forth through the early run in a rather messy set. Nicole Carey dumped the ball across the net to even the score at 8-8, before an Ali Hanger service ace put the team up by three, 12-9. Cumberland went on a run to end the set, winning it, 25-17, off a Wickham kill on the left side that just stayed within the back corner on the Blue Raider side of the court.

Lindsey Wilson took an early lead and held control through the first half of the set, but Cumberland never fell back too far, fighting back. Arena stuffed a Blue Raider attack to pull CU within one point of Lindsey Wilson, followed by back-to-back Lindsey Wilson errors to take a 15-14 lead. The crowd was raucous over the course of the set and only grew louder as the Phoenix continued to make acrobatic, diving digs and receives. Cumberland pulled away to end the set, taking the 2-0 set advantage off a Nalovic kill that broke through the Blue Raider defense.

Momentum turned against Cumberland in the third set. Lindsey Wilson quickly took a six rally lead, 13-7. Freshman Victoria Johnson recorded an ace to pull the team within three, 17-14, before Arena and Wickham combined on a block to even the score at 19-19. A CU service error led to four straight Lindsey Wilson points, making the sweep a hard task to pull off. The Phoenix managed to get back within one rally at 24-23 off an Abby Akins kill that she fit under the block, but the set ended on another Cumberland service error.

A bevy of mistakes over the course of the fourth and fifth set took away any hope of pulling off the upset for Cumberland. The team pulled within one rally of Lindsey Wilson late in the fourth set, 18-17, but the Blue Raiders pulled away from afterwards, scoring 23 kills to Cumberland’s seven over the rest of the match.

The Phoenix take a week off before returning to action on the road at Thomas More next Friday in Crestview Hills, Ky.