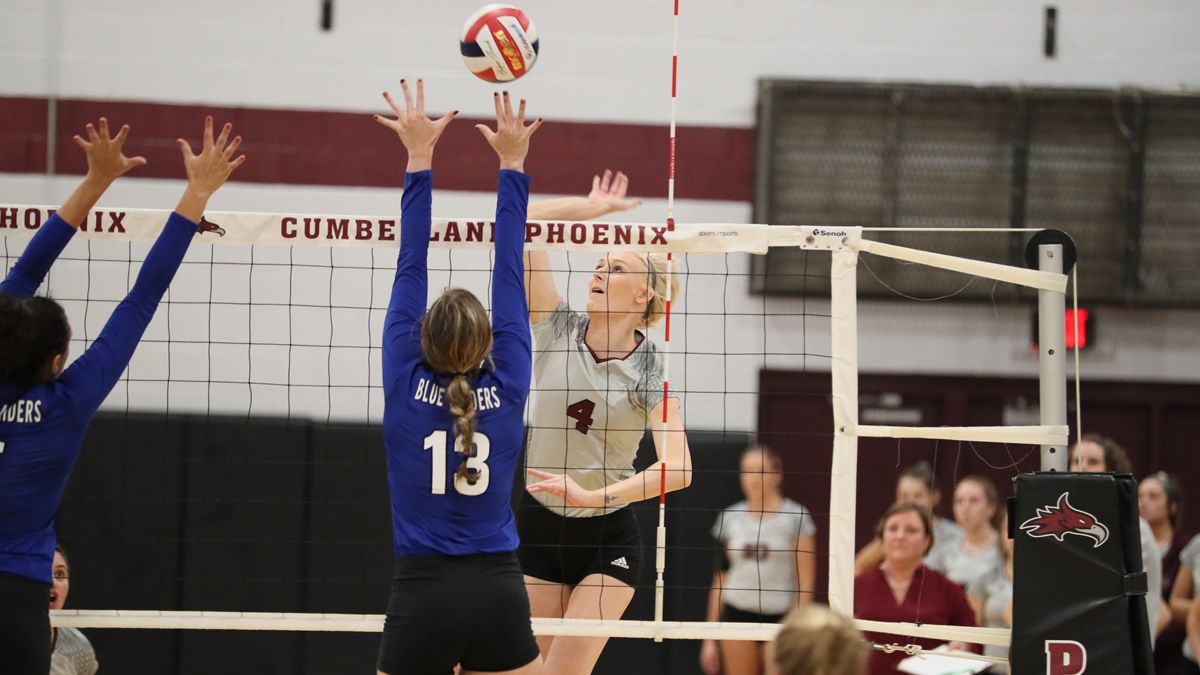 LEBANON, Tenn.--The Phoenix women’s volleyball team continued its excellent start to their home and conference schedule with a 3-1 victory over Cumberlands (Ky.) tonight at home to sweep the Patriots on the season.

Cumberland (14-8, 6-3 MSC) started the match slow, losing the first set to Cumberlands (Ky.) (12-9, 3-6 MSC) before playing very cleanly on the offensive side. The Phoenix earned 21 more kills than the Patriots on the night, 54-33, while also adding a season high 14 service aces. Three Cumberland players earned three or more aces on the night.

Mikayla Wickham provided an offensive spark from start to close for the Phoenix, leading all players with 17 kills, while Lyssette Serna chipped in 12 kills of her own. Bianca Rodriguez troubled the Patriots receive all night, earning five aces on the night, while fellow freshman Victoria Johnson--not to be outdone--also had a career night with four aces. The defending MSC Defender of the Week, Sadie Edmonston had another great night, collecting three aces to go along with her game high 23 digs.

Mackenzie Koch and Ashley Sobocinski combined to lead Cumberlands (Ky.) attackers with eight kills each. Jennifer Stein played very well on the serve, adding four to her team’s cause.

The Phoenix jumped out to a quick start, taking a 3-0 lead off a massive Luciana Arena solo block in the middle. The teams went back-and-forth trading points until a nine rally run from the Patriots put them up 19-13. Cumberland relied on a 6-0 run capped off by a Victoria Johnson ace to tie the set at 21-all. Cumberlands (Ky.) took the final four vollies to win the first 25-21. Cumberland did not help themselves much in the set, a poor .077 attack percentage through the latter portion holding the team back.

Wickham recorded four kills in the second straight set, helping to buoy the team to a set victory to even the match. A 3-0 run by that finished on Serna’s second ace of the night grabbed the team a 14-11 lead. A much better attack percentage in the set, .237, helped the team to pull through and continue to build space between the teams in the later part of the second. Cumberland ended the set when Bianca Rodriguez served a very hard to return ball that forced the Patriots to commit an error on the over, 25-18.

The momentum that the Phoenix built up to close the second continued into the third, helping them quickly express dominance in the set. Cumberland combined for a ridiculous .500 attacking percentage in the set on its way to a quick 25-7 set victory. The set started on a five rally CU run, Rodriguez contributing two of the three aces she recorded over the set during that stretch. Serna played a key role in ending the set, earning three kills in the final five rallies, including the set clincher.

The fourth and final set played out as much of the same for Cumberland, the team continuing its extremely efficient offensive play with a .438 attack percentage in the set. Serna and Wickham both played out of their minds in the fourth, earning six kills each. The Phoenix stretched their lead to 10 when Masa Nalovic struck her ninth kill of the match, 21-10. Wickham ended the match on a sharpshooter shot of a kill that went cross court into the unmanned back right corner.

The Phoenix are at home again this Friday for their last home match in nearly three weeks, facing Life University at 6 pm.