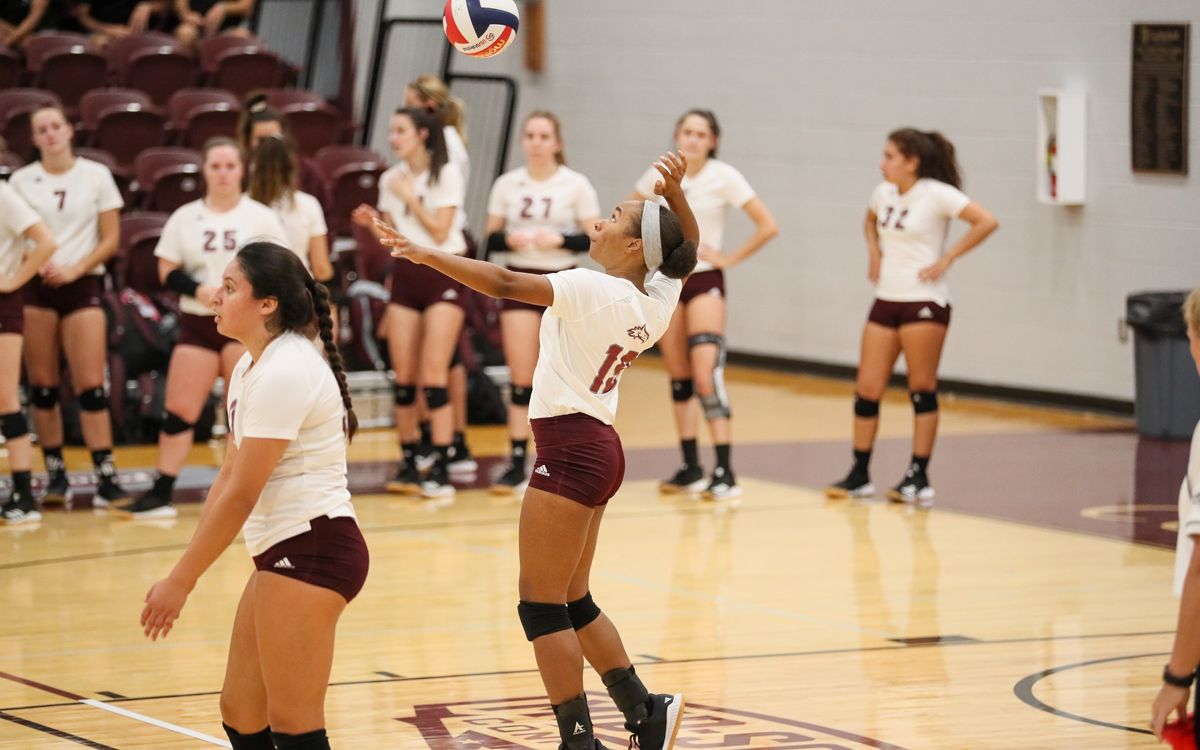 ST. LOUIS, Mo.-- The Phoenix women’s volleyball team made quick work of their day one opponents at the STLCOP Classic, Freed-Hardeman and Stephens College, sweeping both teams.

Cumberland (17-8, 7-3 MSC) collected two wins on the day to extend its win streak to six games. The team played incredibly efficiently against Freed-Hardeman (14-9) before getting a chance to play some of the team’s younger players along the front line against Stephens College (3-15).

The Phoenix’s excellent attack percentage, .345, in the first match came in large part from efficient play on the attack while the block created all sorts of problems for Freed-Hardeman. Masa Nalovic led all players with 11 kills while tying Raegan Moeller for the game high in blocks with five, both players earning more kills than the entire Lions team. Victoria Johnson and Sadie Edmonston had great days on the serve, both collecting three aces on the day.

Claire Walker was Freed-Hardeman’s best player in the match, contributing eight kills to the team’s effort on a day where the Phoenix defense and receive forced the Lion’s into a -.012 attack percentage.

The Phoenix made quick work of the Lions in the first set, only recording one error to offset the team’s 12 kills for a .423 attack percentage on their way to a 25-20 set victory.

Cumberland’s success in the first set quickly transitioned into a good start in the second, jumping out to a 3-0 lead that was capped by a Nalovic and Nicole Carey combo block. The Phoenix continued to extend their lead on one of the team’s many blocks of the day, this time from Mikayla Wickham and Luciana Arena, 11-3. Freed-Hardeman tried to make a mid-set push, but back-to-back aces from Johnson earned the team a 22-15 lead. The set was won 25-16 when Wickham struck a kill that spun on the blocks hand out of play.

Freed-Hardeman found some momentum early in the set to grab a 5-1 lead, but the Phoenix charged back to tie the match 5-5 with a Nalovic kill from the right side. Cumberland’s first lead of the set, 9-8, came off the hands of Abby Akins, the senior getting a quick kill through the Lion defense. The Phoenix forced a Freed-Hardeman timeout when they won their fourth straight rally off a Nalovic kill struck so hard that the Lion defender that was in position to dig the ball could not contain it. Jovana Cernjanski helped Cumberland push its lead to 16-10 off her second service ace of the match. Freed-Hardeman made a run to cut the lead to 21-18, but the Phoenix won the final four rallies of the match to win 25-18.

Cumberland took the chance in the second game to give some of the senior hitters a break, cycling in some players that have not gotten to play as many sets this year. Due to that, four players recorded seven kills in the match, Carey, Moeller, Isabella Curcio, and Brooke Gardner. Despite the increased player rotation, the team still managed a very efficient .333 attack percentage.

Stephens College faired not much better than Freed-Hardeman on the attack with a .091 rating, but two of their players, McKenzi Domescik-Rink and Maggie Howe, tied for the match lead in kills with eight a piece.

Johnson continued her strong play from the serve early in the second match, connecting on back-to-back aces to push Cumberland to a quick 11-4 lead. Wickham took advantage of her limited minutes in the match, scoring three-straight kills that the defenders just could not control to end a five rally run, 18-7. Carey ended the set with a powerful kill that she struck across her body from the middle, 25-12.

After Arena and Cheyenne Corey combined on a block for an early 3-1 lead, Stephens College came rumbling back to take the lead. The Stars took their largest lead of the match at 14-10, but two straight Gardner kills were later followed with a Moeller kill to take the lead, 15-14, as part of a six rally run by Cumberland. Curcio struck a kill from Johnson that ricocheted off the Stephens College block for a 20-16 lead. A Cumberland service error cut the lead to 22-20, but another combo block from Arena and Corey and a Stars attack error ended the set in the Phoenix’s favor, 25-20.

Curcio sent a kill through the hands of defenders for a quick 2-0 lead in the third, but Cumberland errors helped the team still be tied at 9-9. Solid defensive play helped the Phoenix create some breathing room. Back-to-back kills from Serna extended the team’s lead to 20-13. The match ended on a massive kill from Gardner that was set up by Johnson for the 25-19 set victory.

The Phoenix continue competing in the STLCOP Volleyball Classic tomorrow morning, first facing Haskell at 9 a.m., followed by a noon match against the tournament host, St. Louis College of Pharmacy.