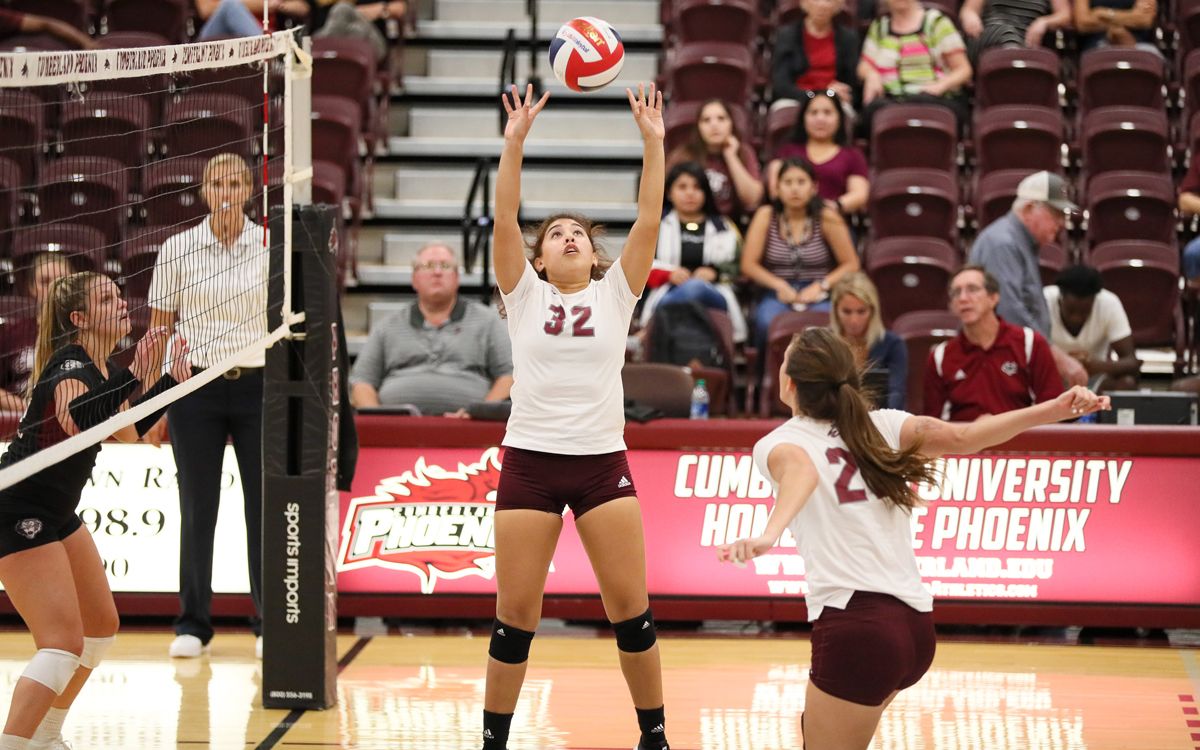 Cumberland (18-9, 7-3 MSC) stretched its winning streak to seven with another dominant performance in its victory over Haskell College (9-18) followed by a loss against St. Louis College of Pharmacy (14-7) that came in large part due to too many unforced errors.

In the first match, the Phoenix played incredibly efficiently, recording a .455 attack percentage with four players recording six of more kill, Mikayla Wickham and Lyssette Serna leading the way at eight and seven, respectively. Bianca Rodriguez led all players in assists with 21, while her running mate Victoria Johnson compiled three more service aces, both freshmen having moved to over 500 assists on the season.

Haskell College struggled to get anything going in the match, only managing a -.053 attack percentage. Cailey Lujan earned the most kills on her team with five.

Cumberland quickly created separation in the first set, going on a five rally run to take an early 5-1 lead. Back-to-back Johnson aces off the hands of the Haskell defenders pushed the Phoenix to a commanding 12-3 lead. Rodriguez dropped in an ace of her own for a 21-7 lead. Serna ended the set, 25-13, with a kill that Haskell was unable to receive, the ball careening back behind the team.

Cumberland owned a ridiculous .630 attack percentage, collecting 17 kills and no errors on its way to an even quicker second set out. Wickham fit a kill just inside of the backline for a 4-2 lead as part of an early 6-0 run by Cumberland to extend its lead to 9-2. Another Phoenix run this time capped by Isabella Curcio moved the score to 16-4. Rodriguez assisted Brooke Gardner and Raegan Moeller on straight rallies for the 24th and 25th points of the set, respectively.

Luciana Arena continued the Cumberland momentum on the first rally of the third set, absolutely stuffing a Haskell kill for a 1-0 lead on the solo block. Wickham went up from the left side for a fast kill, finishing a 4-0 Phoenix run for a 7-1 advantage. Cumberland’s edge moved into the double digits when Curcio ended a back and forth volley with a kill from the right side, 16-5. Another kill from Curcio set up by Johnson that flew into the far right corner ended the set and match, 25-11.

In the second match, Masa Nalovic earned a tournament high 15 kills, Wickham chipped in 11 of her own, and Sadie Edmonston was all over the place on defense, recording 32 digs, but it was not enough to offset the team’s mistakes.

The first set was a back and forth affair, the Eutectics maintaining a slight lead until Nalovic struck a kill that grabbed the team a tie at 11-11. After a Phoenix attack error put St. Louis up 23-20, a three rally run by Cumberland that included a clutch Abby Akins kill tied the game again at 23-23. Another attack error and bad set ended the first in the Eutectics favor, 25-23.

Wickham won the first rally of the second set, sparking the team to a 4-0 start, before another four rally run was capped by a Jovana Cernjanski ace for an 8-4 advantage. Back-to-back Eutectics aces evened the set at 12-12, but a Serna kill and ace gave Cumberland an edge they would not relinquish the rest of the set. St. Louis pulled within one at 20-19, but five straight won rallies for the Phoenix ended in a Edmonston kill for the 25-19 set victory.

Cumberland channeled the momentum gained in the second set into the third, breaking a 4-4 tie with a 6-0 run to take a commanding 10-4 lead. One of the Phoenix’s many service errors on the day broke the streak, but the team responded with another five rally streak, finishing it with a Carey kill, 15-5. Cumberland stayed hot, not giving the Eutectics any room to breathe, taking the set 25-12 and threatening to end the match after winning two straight sets.

Cumberland’s efficient play in the third set--16 kills without a single attack error--disappeared in the fourth. The team quickly fell into a hole, mostly of their own doing, offsetting 11 attack errors in the set with only eight kills. The Eutectics evened the match 2-2 with a 25-15 set victory off a Cumberland block error.

Moeller helped the Phoenix strike first in the final set, but neither team played particularly cleanly causing the teams to trade the lead back and forth over the course of the set. Cumberland took late 11-10 and 13-12 leads off a Moeller and Akins block and Wickham kill, respectively, and positioned themselves for the win at 15-14 after a Eutectics bad set. The match ended on an attack error and bad set by Cumberland, 17-15.

The Phoenix stay on the road for their next match, heading to Campbellsville, Ky., for a conference game Tuesday at 6 p.m.