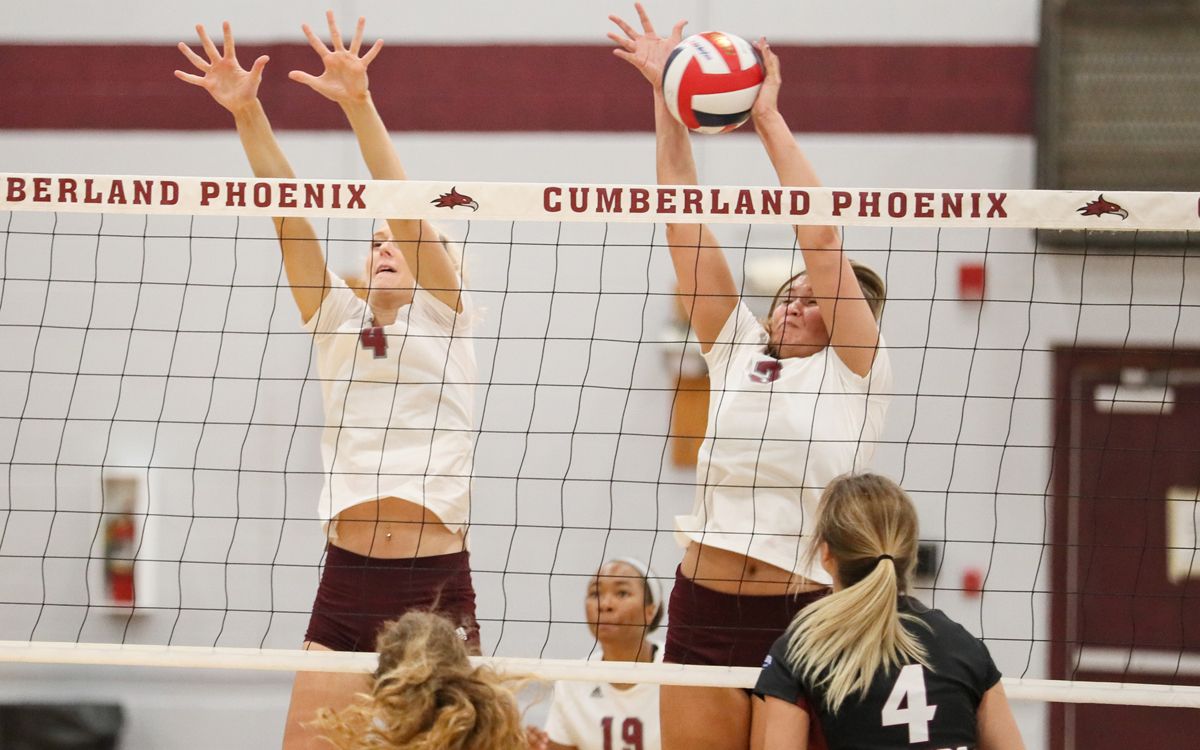 Cumberland (19-12, 8-5 MSC) earned a much need conference win tonight over the team that currently ranks third in conference, Georgetown (Ky.) (17-11, 10-4 MSC). The win saw Cumberland earning an extremely impressive .366 attack percentage, with only 10 attack errors to offset the team’s 47 through only three sets of play.

Carey Nicole had one of the best matches of her young career. The sophomore led all players with 14 kills and two blocks while being very efficient with the ball, seeming near unstoppable from the middle of the court at times. Seniors Masa Nalovic and Lyssette Serna also turned in stellar performances. Nalovic 11 kills, while Serna pitched in eight more as well as two service aces and eight digs. Sadie Edmonston matched Serna on aces and led the team with 10 digs.

Ashton Meckle led the Tigers in both kills and blocks with eight kills coming on a nice .316 attack percentage and two blocks.

After a tough time serving in their last match, the Phoenix started this match on a positive note, Edmonston striking an ace that went careening off the hands of the receive into the bleachers. Carey played on fire from the middle through the early stretch of the first, earning three kills on the first eight rallies, her third setting Cumberland up with a 5-3 lead. The Tigers charged back after the Phoenix took an early lead to even things at 9-9, but the Phoenix took the lead for good off a Abby Akins kill from the right side, 13-12, that was followed by an Ali Hanger ace. The team took a 22-18 lead when Carey smacked a ball that rebounded off the block into the back corner and then the set was won, 25-20, on a service error by Gerogetown.

The second set started close, both teams playing efficiently on the attack, but a 4-0 run capped by back-to-back Serna aces grabbed the Phoenix a lead they would not relinquish. Nalovic snuck a kill right beside the block along the far line to maintain the lead, 10-7. The lead extended during the mid-portion of the set, Akins pushing a kill into the far corner that a diving Georgetown player was unable to dig to stretch the lead to 18-11. Carey got back-to-back kills past the middle block to put the Tigers on the brink 23-16 before the set ended in a similar manner to the first with another Georgetown service error, 25-20.

Raegan Moeller recorded back-to-back kills over the Tigers to take an early 9-5, but Georgetown responded quickly tying the game at 9-9. Shortly after, the Phoenix went on a massive 8-0 run, taking a 19-10 lead. Akins and Carey both earned two kills and combined on a crowd rousing block during the stretch. Georgetown tried to threaten again, but too much momentum was on Cumberland’s side, Serna setting the team up with match point at 24-17, and then ending the match with another that she just barely managed to tuck into the back left corner of the court.

The Phoenix remain at home for their next match, the second of a three match homestead, this Friday at 5:30 p.m. against conference newcomer Thomas More.