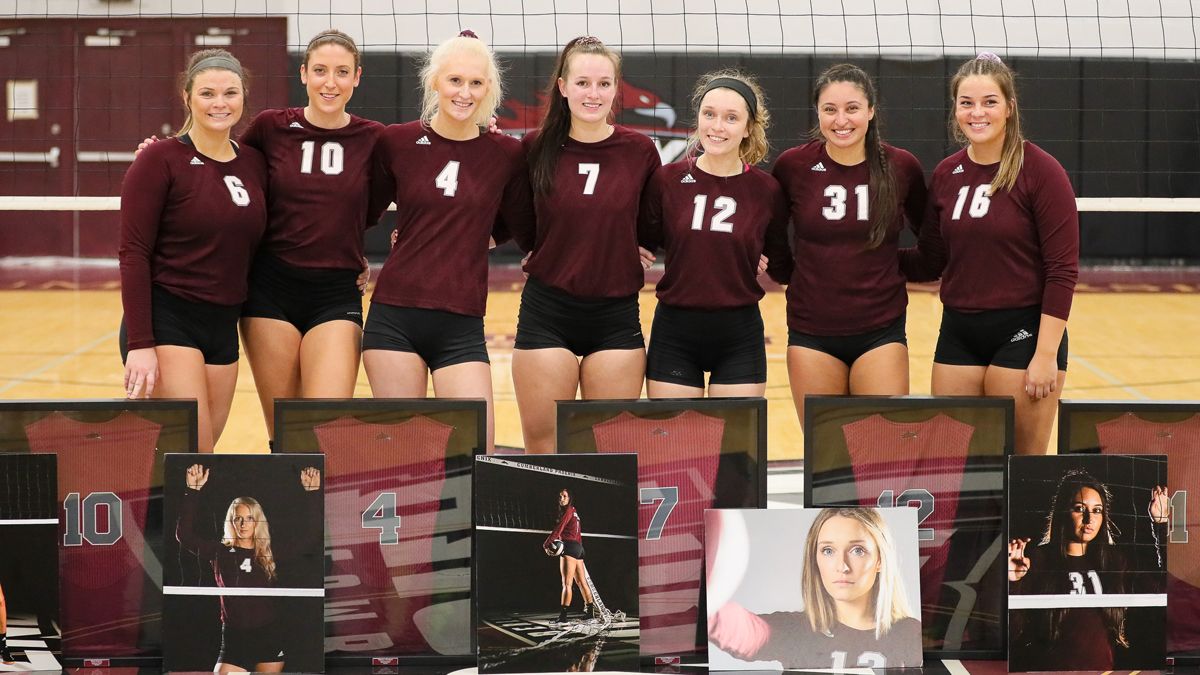 LEBANON, Tenn.--The Phoenix defeated a strong Martin Methodist team, 3-1, in the team’s final home match of the regular season as the team honored its seniors.

Cumberland (20-13) made it to 20 wins on the season with the victory tonight, earning the total for the first time since the 2010-11 team earned 24. The Phoenix honored seven seniors-- Masa Nalovic, Lyssette Serna, Abby Akins, Raegan Moeller, Ali Hanger, Brooke Gardner, and Mikayla Wickham--in their final regular season home, getting good play from each of them to defeat Martin Methodist (20-7).

Nalovic put on a dominant performance for her final match in Dallas Floyd Phoenix Arena, earning a game leading 19 kills. Sadie Edmonston was active on the serve and in defense, leading all players with three aces, while topping the Phoenix with 24 digs.

Martin Methodist’s Kara Nelms performed the best among Redhawk attackers with 13, while Chandler Salvig was a force along the net with seven blocks.

Masa Nalovic started Senior Night on a good note, striking a kill the deflected off the Martin Methodist block out of play. The first set saw all of the seniors contributing in big ways. Nalovic earned two early kills, one of Akins three kills in the set ended an early 3-0 Redhawk run, Hanger played well defensively while chipping in a service ace for a 6-4 lead. Lyssette Serna played very well defensively while her kill of the set sparked a 4-0 streak by the Phoenix, Raegan Moeller and Mikayla Wickham capping the run with a combo block, extending to a 11-5 lead. Brooke Gardner attempted four attacks in the set and earned four kills, her first coming at 14-12 to end a six rally push by Martin Methodist. Cumberland maintained its lead through the rest of the set, winning off a Martin Methodist attack error, 25-21.

The second set started as a struggle to make any headway for both teams, Martin Methodist holding a small lead through the first half of the set. Two of Nalovic’s five kills in the set helped keep the Phoenix close through the early running. Sadie Edmonston took over on the serve, striking two aces over the course of three rallies to pull within one and then take the lead 18-17. Moeller floated a ball over the defenders to push the lead to 22-18. The Redhawks charged back late in the set, but Gardner continued her strong play, ending the set, 25-23, on an attack that kicked off the Martin Methodist block towards the scorer’s table.

The first half of the third set saw the Phoenix looking to build upon their momentum, Edmonston earning her third ace of the match for a 4-1 lead. Martin Methodist tied the set at 13, but Nalovic answered by smoking an attack into the foot of a Redhawk defender to quickly retake the lead. Cumberland put Martin Methodist on the brink with Wickham whipping a kill into the corner and Carey following that with a huge kill in the middle for the 21-17 lead. Martin Methodist went on an 8-1 run the rest of the way to take the set 25-22.

After a messy finish to the third set, the Phoenix bounced back in the fourth, Serna giving Cumberland a, 5-4, lead off a service ace that just stayed inside the lines. Akins and Carey stone walled a Martin Methodist attack as part of a 3-0 run to take an 11-7 advantage. Cumberland kept its lead going past the middle portion of the fourth, Victoria Johnson pushing the set to 17-12 with an ace off the knuckles of the Martin Methodist receive. The Phoenix again found themselves with a 21-17 advantage, but responded much better than in the previous set, winning the match 25-19 off a Nalovic kill that struck the court in front of a diving Redhawk.

The Phoenix hit the road for their last two regular season matches of the year, playing at Shawnee State this Friday at 4 p.m. before heading to Pikeville the next day for a 1:30 p.m. game time.