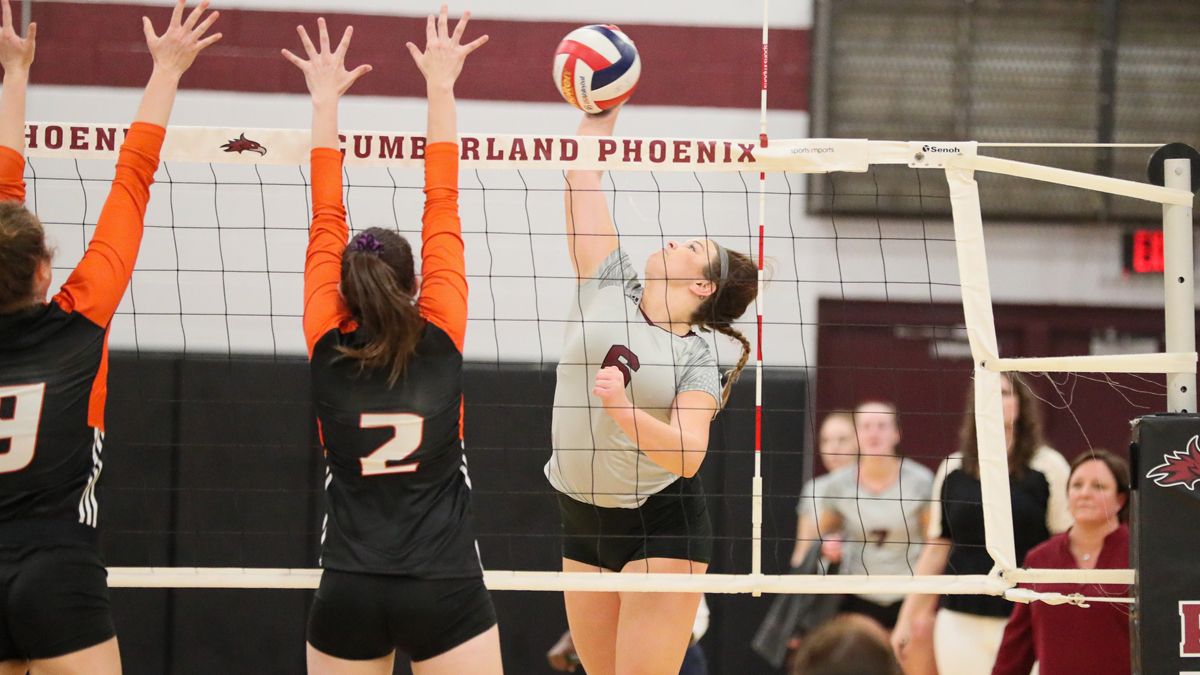 PORTSMOUTH, Ohio--Women’s Volleyball defeated Shawnee State on the road today, 3-1, charging back to easily dismantle Shawnee State after losing the first set on the back of an excess of errors.

Cumberland (21-13, 9-6 MSC) played lights out on the attack in both the second and fourth sets--.400 and .467 attack percentages, respectively--to more than regain all the momentum after a slow start to the match to sweep Shawnee State (8-26, 4-12 MSC) on the season.

Seniors Masa Nalovic and Abby Akins led the Phoenix attack, Nalovic contributing 14 kills while Akins added 10 of her own. Breakthrough freshman players, Victoria Johnson and Bianca Rodriguez led all players with 26 and 21 assists, respectively while also tying for a game high three service aces. Sadie Edmonston followed the freshman with two aces of her own, and played exceedingly well on the defensive side with 22 digs.

Macie Rhoads was the only Bears player to record double digit kills, earning 13 on a very solid .281 attack percentage.

The teams swapped blows through the early portion of the first set and set at an 11-11 tie after Lyssette Serna earned a kill. From that point, the Phoenix fell behind and stayed behind, their .031 attack percentage in the set not helping at all as Shawnee State won 25-21.

The Bears looked to try and run away with the match, taking the first three rallie, but the Phoenix responded with four straight points--two off Edmonston’s aces. Another 4-0 Phoenix run grabbed the Phoenix a 10-6 lead and enough momentum to make their way through the rest of the match. Nalovic capped another Cumberland run with a kill to take a commanding 19-10 advantage. Mikayla Wickham set the team up on match point with a quick kill from the right before combining with Nicole carey on a huge block to win the set 25-12.

Wickham recorded back-to-back kills to take an early 5-2 lead, before Cumberland went on a dominating 7-0 stretch. A Serna kill four deep into the run at 11-4 forced a Shawnee State timeout, but it did nothing to stymie the run. The Bears made a run while the Phoenix played sloppily to cut the lead to only four at 21-17, but Cumberland responded. Akins put Shawnee State on the brink with a kill for the 23-17, as the Phoenix went on to win the set, 25-18, on an error.

Cumberland ran away with the fourth set, following Luciana Arena igniting the team by getting up to dump a ball over the net that rebounded off the Shawnee State block, 2-1. Akins slammed a kill into a Bears defender for a quick 9-2 lead. Cumberland continued to dominate the set, Serna striking a kill that deflected off the fingertips of the block to push the lead to 16-7. Shea Moore extended the lead to 12, 23-11, on her second ace that kicked sideways off the hand of the Shawnee State receive. Akins followed that ace with an attack that bounced off the block to place the team at match point from which Cumberland won, 25-12, on the set on the ensuing rally as Shawnee state committed a ball handling error.

The Phoenix stay on the road for their next match, facing Pikeville at 1:30 p.m. tomorrow.