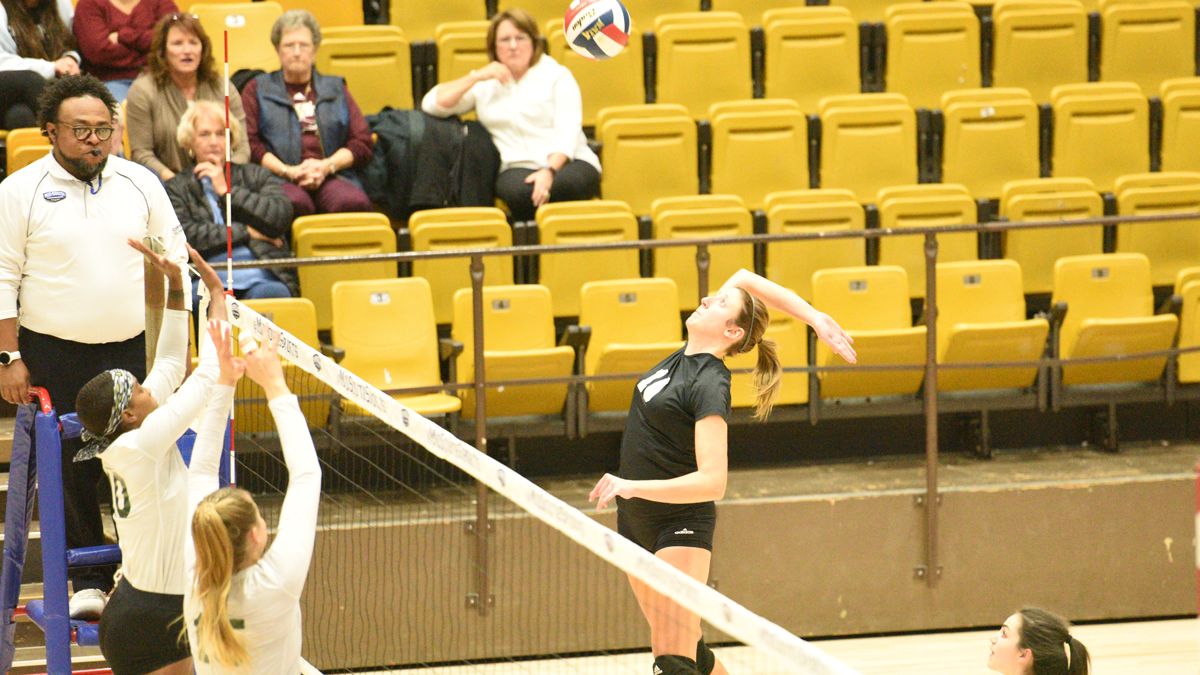 BOWLING GREEN, Ky.--The Phoenix fought tooth and nail against Life in the Mid-South Conference Tournament, but fell to the Running Eagles tonight in five sets, 3-2.

Three Phoenix players broke into double digit kills on the night, Masa Nalovic leading the team with 14, Abby Akins following with 13, and Mikayla Wickham contributing 12 of her own. Akins also led all players with six blocks.

The Running Eagles had four players of their own with 10 or more kills, Zykeria Allen and Lena Pucnik tying for the game high at 15. Mary Zimmerman and Caitlyn Neal also put together strong game, earning 11 and 10 kills, respectively.

The Cumberland attack struggled through the first set, hitting an abysmal -.031 percentage. Akins broke a Life run, hitting a fading kill into the back corner of the court to cut the lead to 9-3. Life continued pulling away over the course of the set. A 3-0 Cumberland run capped by a Raegan Moeller and Wickham combo block pulled the Phoenix within seven at 24-17, but lost the set on the next rally.

The Running Eagles jumped out to a quick start in the second set, but Cumberland continually found a way to pull themselves back into things. Nicole Carey hammered a kill that was set up to her by Victoria Johnson to pull within one at 6-5. Late in the set, the Phoenix went on a big-time 5-0 run, cutting the lead to 20-17, a Wickham soft touch attack floating over the block to force a Life timeout. Cumberland tied the game at 22, following another five rally run, again tying at 24-24 off a Nalovic kill. The Phoenix won the set 27-25 after taking the final three rallies.

The third set was highly contested, neither team ever to exert a true hold on the lead. Wickham smashed a kill through the Life block to keep the set tight at 5-3. Moeller got vertical on a kill that evened the set at 8-8, hitting the ball down in such a way that made it basically impossible to dig. The third stayed tight in the later portions, a Nalovic kill cutting the Life lead to 18-16. A Shea Moore service ace tied the match at 24-24, but Life took the final two rallies to win 26-24.

The Running Eagles won the first two rallies of the fourth set, but Cumberland controlled the set from that point, taking the next four, capped by a Sadie Edmonston ace off the hands of the Life receive. Another early Cumberland run saw back-to-back blocks as the Cumberland lead swelled to 8-3 to force Life’s coach into calling a timeout. Despite the stoppage of play the Phoenix stretching its run to 6-0 for a 10-3 lead. Nicole Carey ended a small Life streak, striking a kill into the feet of a diving Life defender to push the lead to 13-8. The lead moved to 19-13 when Edmonston set Wickham up on an attack from the right side which careened out of play off a Life player. Akins set the team up on set point with a strong cross-court kill, which Edmonston followed with her second ace of the night for a 25-20 set victory.

Akins got the scoring in the fifth set started, the teams trading points over the first half of the final set of the match. Cumberland fell down two, but pushed back to tie the set at 7-7 off a Nalovic kill. Life went on a 3-0 run that Nalovic ended with another kill, Life leading 10-9. The Running Eagles set themselves up at match point by taking four straight rallies, and then winning the set 15-11.

With the loss, Cumberland is out of the running in the Mid-South Conference tournament, and will be waiting on news from the NAIA to see if their season will continue.