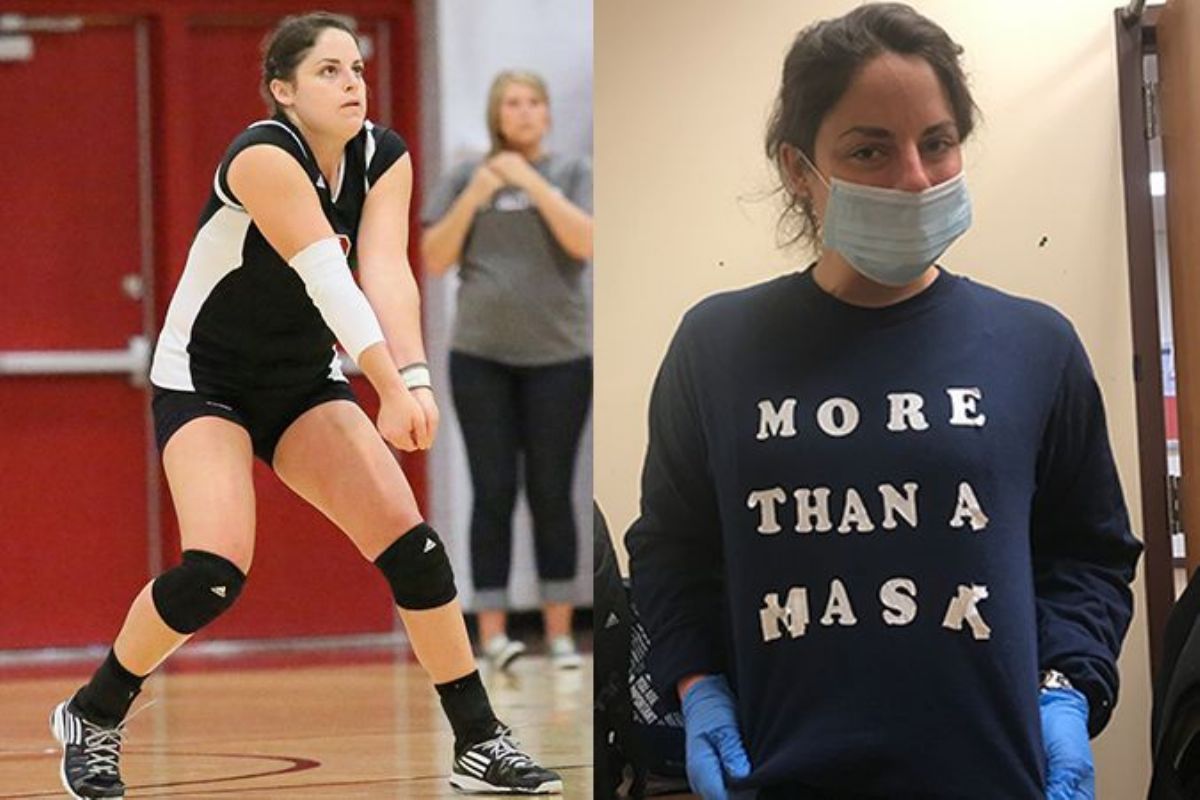 LEBANON, Tenn.—Former Cumberland University women’s volleyball player, Karli Collins, has shown true characteristics into what it means to be a Healthcare Hero even before the COVID-19 pandemic. Collins now works as an Athletic Trainer at the University of Rhode Island.

In high school, Collins was a four-year starter for Coach Patrick Snead at Tarpon Springs High School, where she led the team in both assists and kills as a senior. She served as the team captain for her final two seasons, earning MVP honors both years.

Collins was selected to the Pinellas County All-Star Team and Second Team Pinellas County Athletic Conference as a senior and named PCAC honorable mention her first three seasons. She earned the team’s Offensive MVP award as a sophomore and Rookie of the Year as a freshman.

Collins knew in high school that she wanted to get into athletic training and that played a role in selecting where she would continue her athletic career, “I chose to attend CU because it was really the only university that allowed me to attempt to complete an athletic training degree, and play collegiate level sports at the same time.”

As a four year starter for Cumberland, she saw action in 415 sets, but she had to go through a change in roles. Her first season Collins was second on the team in kills with 268. That season she moved around as a defensive specialist and an outside hitter.

After missing the 2012 season, she played primarily on the backline and spent time as the team’s libero over the next three years. She amassed 1,092 digs in her career. She also was just north of 50 serving aces and collected 131 assists.

Collins said that beating the University of the Cumberlands in five sets at Williamsburg her senior season in 2015 was one of her fondest athletic memories. Over her career at CU, the women’s volleyball team was swept by the Patriots every match they played until that night.

Collins managed her volleyball playing career while going through Cumberland’s athletic training program which included numerous clinical hours. She spent many days going to volleyball practice and her studies to a local high school or doctor’s office in the Lebanon community to complete her hours.

Outside of volleyball and her course work, Collins served two years as the Student Government Association’s President, one year as Secretary, and one year as the Liberal Arts Chair. She also served on the Athletic Training Student Association as Secretary and Vice-President and was on the Leadership Committee for Fellowship of Christian Athletes.

She graduated in 2015 with two degrees but stuck around for one year as a Graduate Assistant for Athletic Training to earn her Master’s of Science in Health and Human Performance.

Cumberland Athletic Training Program Director, Dr. Katie Arnold had this to say about her, “Karli was a hard worker that always went above and beyond what was asked. She not only graduated from the AT program but also was a graduate athletic trainer for us. She has a love for people and just trying to make things better. I’m proud of Karli and thankful for her passion for athletic training and providing a high quality of healthcare for her patients.”

Karli is a valuable member of the Cumberland community and wants to give credit where credit is due for shaping her into throughout her academic and athletic time at Cumberland.

“James Meadows, Katie Arnold, Megan Bynum, Solomon Campbell, Dr. Aldret, and Dr. Brittney Roberts were some of my greatest mentors during my time there for athletic training. They taught me how to advocate for my athletes, and for what I believe in,” she stated.

“Dwayne Deering, Coach Maya, Brittney Harry, and Kathy Slaughter were some of my coaches during my time at CU. They taught me how to push myself, push my teammates, hold people accountable, and how to work as a team.”

After she graduated with her Master’s, she moved to Louisiana for an internship with women’s soccer and track & field at the University of Louisiana at Lafayette. Her internship turned into a full-time job working as an assistant with football for two years. 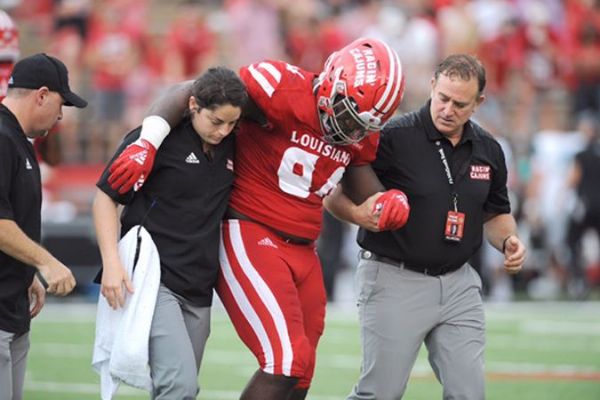 Collins then moved to Rhode Island to be an associate athletic trainer at the University of Rhode Island. She is directly responsible for softball and assists with football.

As an athletic trainer and no athletics at the moment, Collins said, “The majority of sports medicine staff in our state have been laid off or furloughed, I am fortunate that this is not the case at my institution. We closed mid-March and have been working from home; our athletes have not been allowed in the athletic facilities since mid-March as well. We will be hopefully re-opening mid-July with a lot of COVID19 stipulations, social distancing, etc.”

However, not being able to perform her normal duties she has found other ways to step up during the pandemic as well as keep herself busy.

“I volunteer with the Rhode Island Disaster Relief Team, where I do things ranging from collecting donations and logging what was given as well as collecting and packaging supplies that are sent out to local hospitals to help care for patients.”

“I have also been completing temperature checks for essential employees at manufacturing plants, as well as at the Rhode Island Disaster Relief Headquarters.”

“I am a co-creator for the twitter account All Things AT. One of the most uplifting things I have seen during this time was the responses we have seen from our mentorship program that we initiated. Since the majority of the sports medicine world has laid off or furloughed, this has provided a light in our world and improved our communication. We have had great responses from both mentors and mentees in terms of how they have learned from each other, and it has given them some positivity during this time.”

She also recently presented on Vestibular Therapy with the Rhode Island Athletic Training Association Annual Webinar. She said there were close to 300 attendees at the event.

As stated earlier, Collins has worn many hats during her time at Cumberland and beyond and she is quick to give credit to the others around her and her faith, “The first person who motivates me is God. He gifted me with the ability to work as an athletic trainer, my ultimate goal is to do this to reflect Him.”

“The people after that who motivate me, and encourage me are my mentors BJ Duplantis, JD Boudreaux, Brittney Roberts, Solomon Campbell, Cathy Larlham, Mike Monteiro, my parents, and my siblings. I keep working with the hope that soon I will be able to provide care for my athletes and get back to doing what I love,” Collins said. "The students that I have had are a huge part of what I do. It helps to build the next generation, and advocate for my profession." 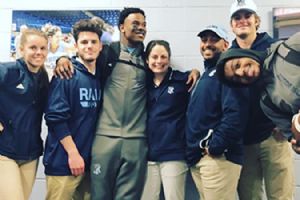 Collins (middle) surround by her students at the University of Rhode Island.