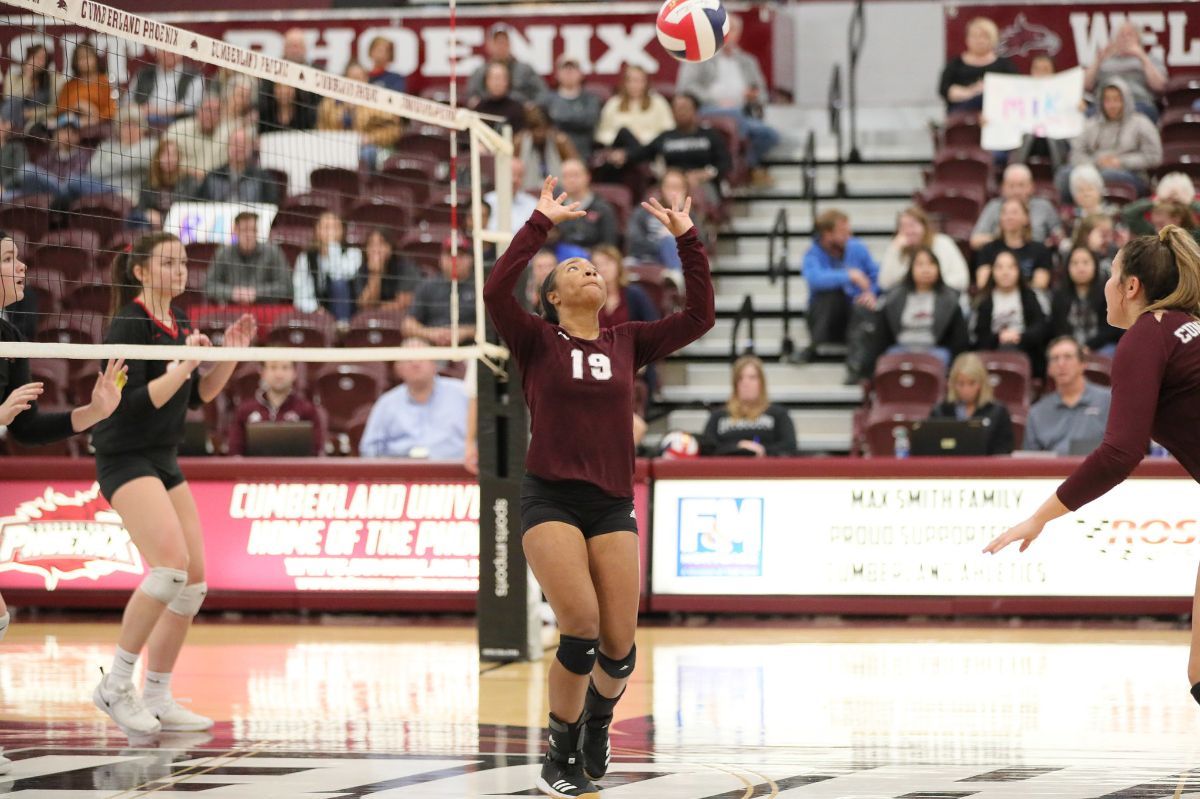 ELGIN, Illi.- The Phoenix fought tooth and nail against Trinity International and Judson University in the TIU/Judson Crossover but fell to both tonight in five sets, 3-2.

Cumberland (0-1, 0-0) lost its first match of the season, as they went five matches but came up short against Trinity International. Isabella Curcio led the Phoenix in kill with 14, while also recording 12 digs. Jovana Cernjanski was able to record a team-high with 20 digs. Victoria Johnson tallied in 41 assists, as well as eight digs.

The Phoenix came into set two with a spark, as they jumped to a 3-1 lead coming from a kill by Samantha Holguin and Lauren Galvan. The Trojans were able to tie the Phoenix at five and went on a 5-0 run coming from multiple kills by Jazmin Coronado. The lead was maintained until mid-set when the Phoenix were able to rally back and tie the game at 15. After errors by both teams, the Phoenix went on to call a timeout with a score tied at 22. Cumberland was able to pull away with set two, as Cernjanski was able to record a serving ace, along with a kill by Maddie Perez assisted by Johnson, Putting the Phoenix ahead, 25-23.

Cumberland was even stronger on the attack in the third set, earning 13 points off kills, but the trend from the first set continued as the team committed even more unforced errors. A pair of serving aces by Cernjanski put the score in the Phoenix favor with a score of 15-12. Kills by Galvan and Perez both assisted by Johnson continued the lead for the Phoenix at 22-19, forcing the Trojans to take a timeout. The Phoenix came out of the timeout and finished the set quickly as a kill by Curcio, and an ace by Perez put Cumberland as the winner of set three with a score of 25-19.

Cumberland’s Lauren Galvan led the team with 13 kills, while Olivia Dodd followed behind with 12. Jovana Cernjanski was able to tally 16 digs, and Victoria Johnson was able to record 48 assists for the Phoenix.

The Phoenix go into the first set of the second match strong as they jump to a 9-4 lead over the Judson Eagles, coming from a double kill by Galvan and a single by Curcio, all assisted by Johnson. The eagles began to fight back as they were able to tie the game up at 12. Cumberland was able to take a five-point lead against the Eagles due to attacking errors, putting the score at 19-15. Errors by the Phoenix changed the momentum in the game and helped the Eagles come back and tie it at 23. Continuous errors by the Phoenix allowed the Eagles to take set one with a score of 26-24.

The Eagles came into set two with the same momentum as they took a 4-1 lead over the Phoenix. Multiple kills by Holguin and Galvan all assisted by Johnson helped the Phoenix take over the lead at 10-8. A kill by Cumberland’s Olivia Dodd and Galvan continued to keep the Phoenix ahead with a score of 18-15. Kills by Judson’s Emmaline Davey and Briana Burns tied the game at 21. The Eagles were able to take away set two from the Phoenix as they were able to win the set, 25-21.

Set five was nothing but intense on each side of the court as the score continued to stay tied until the Phoenix took an 8-6 lead. After a kill by Dodd but an error by Galvan put the Phoenix ahead of the Eagles 13-12. The Eagles were able to take a 16-15 lead, coming from a Davey solo kill. Judson was able to connect on an ace to end the set, putting Judson as the winner of the match with a score of 3-2.

The Phoenix will face against William Penn University in Deerfield Illinois tomorrow at 10 A.M.