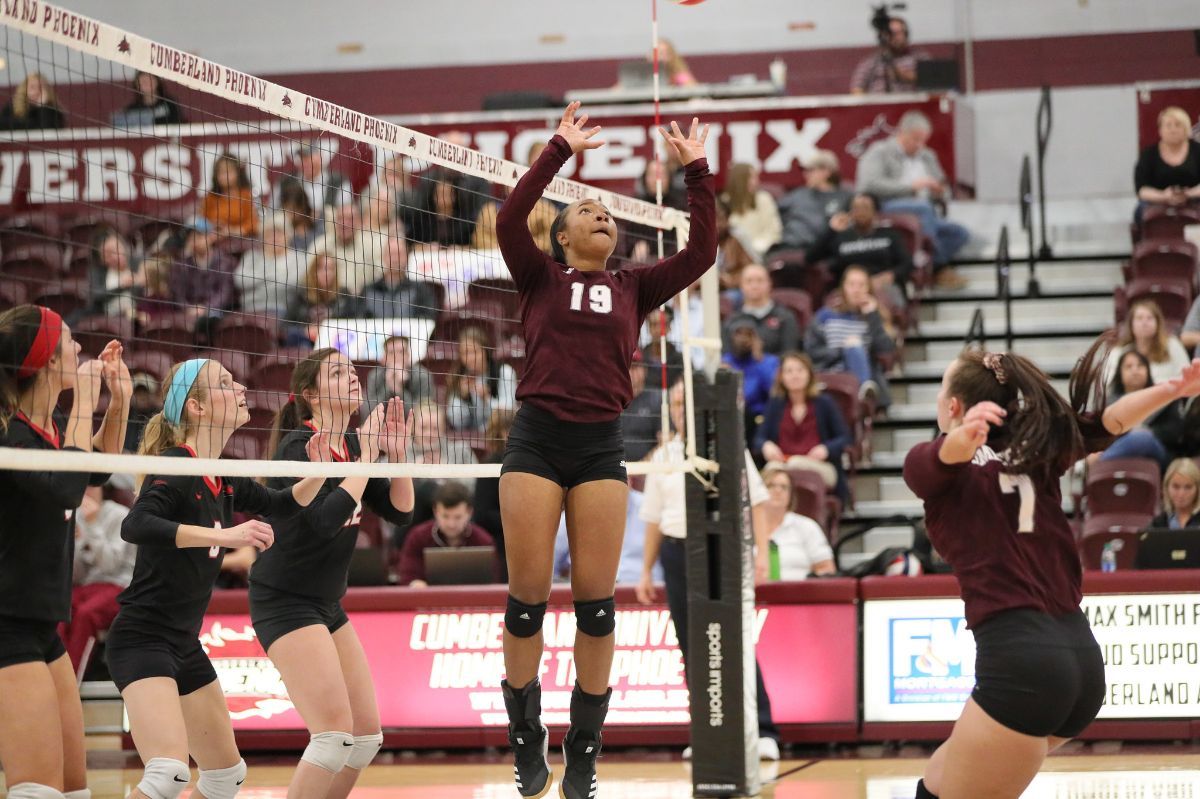 The Phoenix got the ball rolling early in the match with a hard-fought victory in the first set. The start of the set was point-for-point between the two teams until the Cougars went on a 5-0 run to establish a 10-5 lead. The Phoenix offense picked up after that on the back of Sophomore Outside Hitter Isabella Curcio. Curcio helped the Phoenix with three straight spikes to bring the team within three points at 12-9. Errors saw the Phoenix down 17-13 to the Cougars, but the women battled back again with a couple of service aces from Freshman Defensive Specialist Faith Weitzel to knot the set up at 19. The Phoenix then went on a 5-0 run with some help from Cougar attack errors to win the set 25-21.

Cumberland dominated the second set of the match from the start. The Phoenix women jumped out to a 10-5 lead with some big kills from Outside Hitter Maddie Perez, Middle Hitter Samantha Holguin, and Isabella Curcio. After this point, Cumberland never looked back en-route to a 25-13 set victory over Spring Arbor. Sophomore Outside Hitter Olivia Dodd had a big set for the Phoenix recording three kills. Junior Middle Hitter Nicole Carey and Samantha Holguin also had three kills for the Phoenix in the set.

The third and final set of the match was much like the first as Cumberland defeated Spring Arbor in a tight one. The teams traded points throughout the set. Early on in the match, Isabella Curcio bounced back from errors early and recorded two kills to knot the set up at 9-9. The teams traded points up until the 23-23 mark when Olivia Dodd had a huge kill to break the tie at 24-23. Isabella Curcio hit clutch back to back kills from Sophomore Setter Victoria Johnson to win the set 26-24 and the match 3-0.

Leading the way for the Phoenix in assists was Sophomore Setter Victoria Johnson who registered 35 out of the 37 total team assists in the match. Isabella Curcio had a fantastic showing offensively leading the team with 13 kills. Curcio also showed up on the defensive side of the ball registering 9 digs which tied for the team lead with Junior Libero Sadie Edmontson.

The Phoenix struggled with the 4-1 Aquinas Saints losing 3-0 in three close sets. The first set featured a slow start for the women with errors until Isabella Curcio and Olivia Dodd connected on back-to-back spikes to tie up the set at 6-6. The Saints went on a 5-0 run to bring the score to 14-10. The Phoenix were unable to recover from it throughout the set. The four-point gap remained until a big kill by Nicole Carey brought the Phoenix within three points at 22-19. The offense of Aquinas would not be denied, though as the Phoenix ultimately fell 25-20.

The second set was much like the first with Phoenix matching Aquinas almost point for point throughout. Some fantastic sets from Victoria Johnson resulted in kills by both Olivia Dodd and Isabella Curcio which gave the Phoenix their first lead of the day at 6-4. The Aquinas women went on a big offensive run at that point, which included four kills to take the lead at 12-6. The Phoenix battles their way back and tied it up at 13 all with two big service aces from Victoria Johnson. The Phoenix almost matched the Saints point-for-point the rest of the way but lost the set at 25-23. Isabella Curcio had a tremendous set that included six kills.

Cumberland came into the third set with some solid offense ultimately jumping out to a 7-4 lead that included two big swings from Victoria Johnson and Maddie Perez. The Saints rallied back though and took an 11-9 lead. Similar to the first set, the Phoenix got down five points due to errors at 16-11. Cumberland showed signs of life after a kill by Maddie Perez tied it up at 18 all. The Saints went on a 6-2 run at this point and ultimately took the set 25-21 and the match 3-0

As a team, the Phoenix had a .107 hitting percentage as opposed to the Saints .239 percentage. Cumberland connected on 34 kills as opposed to Aquinas' high 43 kills on the match. The Phoenix did well defensively tallying 47 digs as a team.

Individually, Isabella Curcio had a dominant 13 kill outing for the Phoenix and also mustered three service aces. Victoria Johnson led the way for the Cumberland women with 27 assists in the match. Sadie Edmontson had a solid defensive outing where she collected 13 digs.

The Phoenix, now 2-6, next take the court against Lyon College on Feb. 8 at 6 p.m. in their first home game of the season.