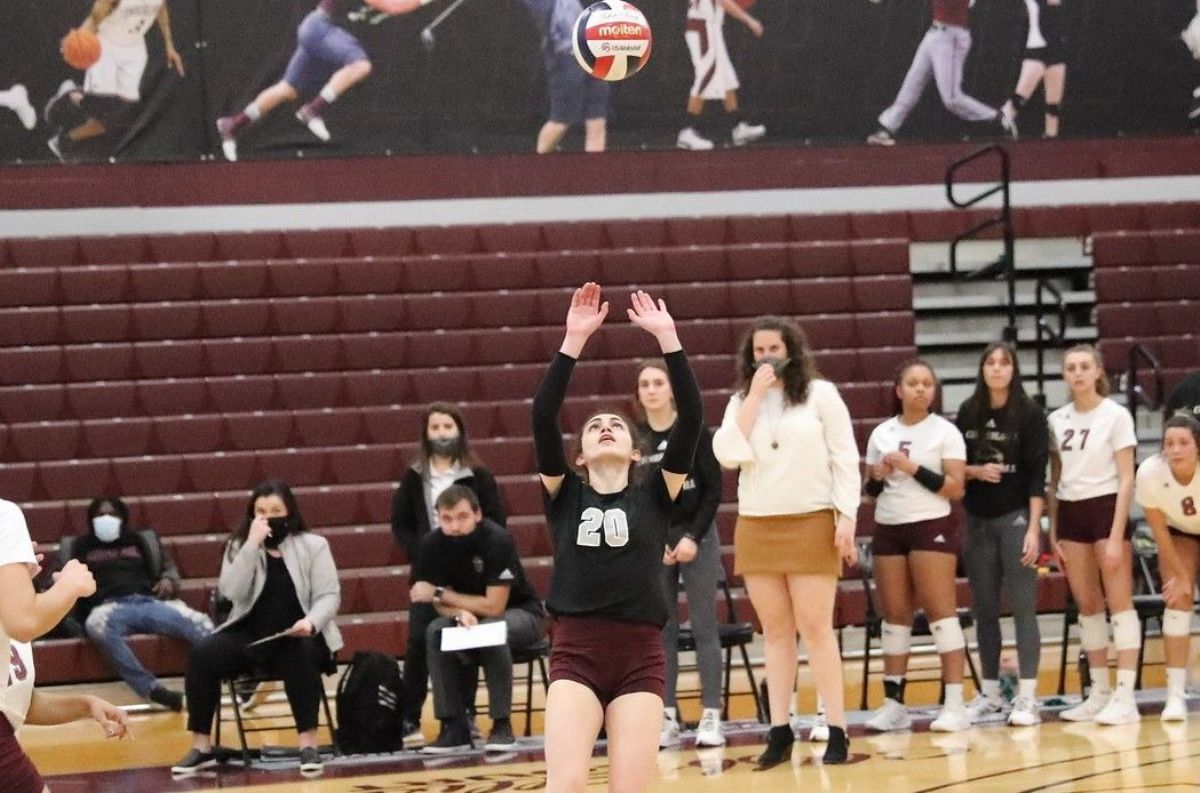 The Phenix began the first set matching the Running Eagles point for point at three-all. Back-to-back kills from outside hitters Maddie Perez and Lauren Galvan brought the score to 7-7. Cumberland heated up and went on a 6-3 run to take a 13-10 lead after Life made several attack errors. Perez and Victoria Johnson hit a pair of big spikes to give the Phoenix a 17-14 lead over Life. Cumberland took the set with a 25-19 win after Sadie Edmonston connected on three straight service aces to end the set.

The Cumberland Women came out playing well in the third set. Madison Dinwiddie registered two kills that helped give the Phoenix a 5-3 lead early. Victoria Johnson gave Cumberland a three-point lead with a big swing to establish a 9-6 over Life. Jovna Cernjanski hit a service ace to put the Phoenix up 15-8 after a 6-2 run. Cumberland went up 18-12, but Life came back and tied up the set at 19-all. The Phoenix went on another 6-2 run capped off by a Victoria Johnson service ace to win the second set 25-21.

The third set did not go as well for the Phoenix. Cumberland started the set in a 4-1 hole to Life. The Phoenix cut the Running Eagle lead to 5-4 after a kill from Samantha Holguin. Life jumped out to a 9-6 lead over Cumberland, but three straight kills from Freshman Lauren Galvan tied the set at 9. The two squads traded points until the 16 point mark when Life went on a 9-5 run to win the second set 25-21.

As a team, Cumberland registered 51 kills topping Life's 47. The Phoenix tallied a .154 hitting percentage along with 46 assists and 83 digs across four sets. Both squads also recorded eight service aces.

Lauren Galvan led the way in kills for the Phoenix with 12 across four matches. Maddie Perez and Nicole Carey were also both in double digits with ten kills. Sadie Edmontson had quite the match defensively for the Phoenix. The Junior recorded 24 digs and also chipped in four service aces offensively. Victoria Johnson led the squad in assists with 22, and Bianca Rodriguez chipped in 18.

Cumberland started the first set against Bryan by jumping out to a quick 3-2 lead off a Nicole Carey kill. The Lions battled back and jumped out to a commanding 11-7 lead over the Phoenix. The Bryan lead grew to 15-9 over Cumberland until a set error from the Lions brought the Phoenix back within five. Bianca Rodriguez hit back-to-back service aces to bring the Phoenix back within two at 17-15. The Cumberland Women battled back to tie the set at 20-all. Bryan College went on a 5-2 run to close out the set 25-22.

The Phoenix jumped out to a 6-2 lead over the Lions in the second set after three straight errors from the Lions. Bryan College got back into the match after a 6-2 run against Cumberland to tie the set up at eight. Kills by Lauren Galvan and Maddie Perez gave the Phoenix an 11-8 lead over the Lions. Bryan battled back and tied up Cumberland at 12. The teams traded points until the Phoenix went on a 3-0 run to take a 20-17 lead on a Bianca Rodriguez service ace. Cumberland held a 23-20 lead over Bryan, but a 5-0 run by the Lions won them the set 25-23.

The third set went much like the first with the Phoenix jumping out to a 4-3 lead over the Lions. The two squads traded points until the Phoenix jumped out to a 10-7 lead over Bryan off a Samantha Holguin kill. Cumberland fell behind after Bryan went on a 7-0 run to take a 14-10 lead. The Phoenix battled back and ultimately took a 20-19 lead over the Lions after a big swing from Nicole Carey connected. Cumberland held a 24-23 lead over Bryan but gave up three straight points to lose the set 26-24 and the match 3-0.

As a team, Cumberland recorded 42 kills across three sets, four more than Bryan College's 38. What hurt the Phoenix were the 23 attack errors they logged, which was eight more than the Lions 18. The Phoenix also registered more digs (68) and assists (38) than the Lions on the day but were unable to come away with the victory.

Individually, Nicole Carey led the way with 11 kills while only committing one error. Sydney Pearce, Lauren Galvan, and Maddie Perez each notched seven kills. Defensively for the Phoenix, Sadie Edmontson recorded a team-high 18 digs. Jovana Cernjanski and Victoria Johnson hit double-digit digs as well with ten each. Bianca Rodriguez led all of the Phoenix with 18 assists in the match followed by Johnson with 15.

The Cumberland Women take the court in a Mid-South Conference matchup on the road against Freed-Hardeman on Mar. 13 at 4 p.m.