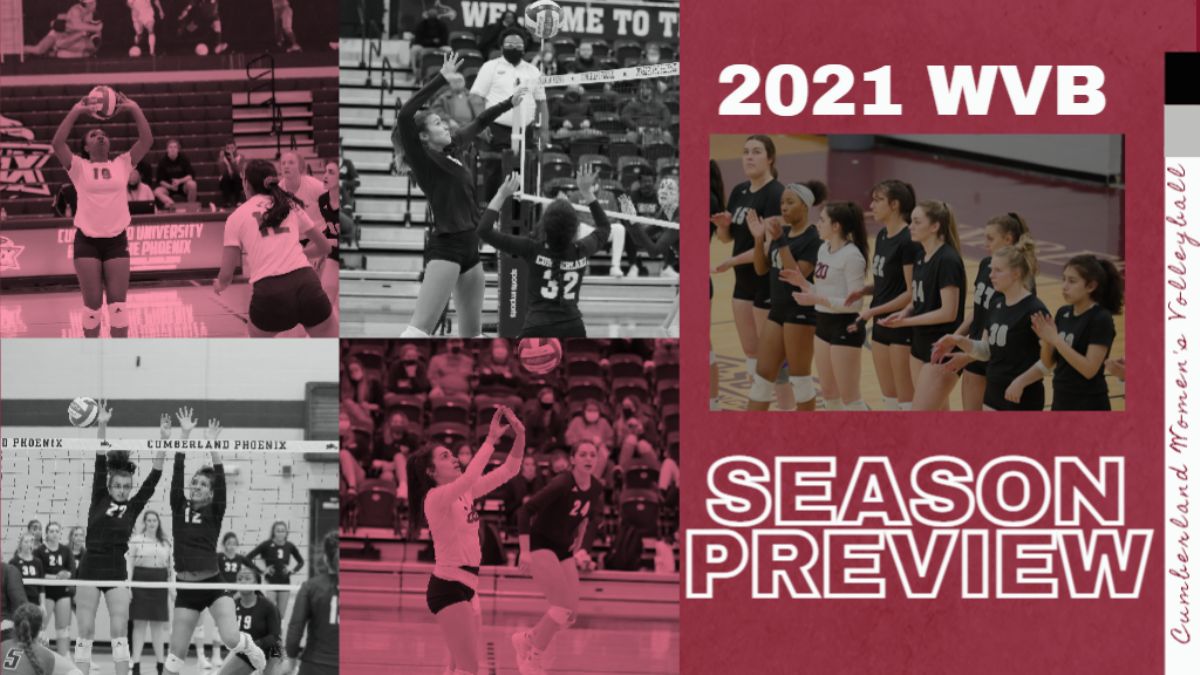 LEBANON, Tenn.-- The Cumberland Women's Volleyball comes into the 2021 campaign with high expectations after finishing the 2021 Spring season with a conference record of 8-8 and an overall record of 11-18.

Cumberland had a slow start to the 2021 spring campaign but had a strong finish, going 8-6 over their last 14 contests to finish seventh in the conference. That stretch included impressive wins over Life University and Tennessee Southern (Formerly Martin Methodist) on the road. The team finished the 2021 spring season falling 3-1 in the Mid-South Conference tournament to the University of the Cumberlands.

The team heads into the season ranked seventh in the Mid-South Conference in the preseason coaches poll behind Shawnee State and ahead of the University of the Cumberlands. Lindsey Wilson College earns the top spot on the poll, followed by Life University, whom the Phoenix topped 3-1 in a big road victory last season. This year the Phoenix take on six teams that are either ranked in the NAIA top 25 poll or receiving votes on the poll including a challenging non-conference schedule. Cumberland opens up their Mid-South Conference schedule against Thomas More University at home on Friday, Sep. 10 at 7:00 PM. All of Cumberland's 2021 home matchups will be streamed online at https://portal.stretchinternet.com/cu/.

Second-year Head Coach Hannah Vadakin returns most of her players from last season, including three All Mid-South Conference award winners in Nicole Carey, Victoria Johnson, and Lauren Galvan. The team also earned their third straight AVCA team academic award last season which is given to programs with a team GPA of 3.3 or higher.

Senior middle hitter Nicole Carey led the Phoenix last season with 207 kills, ranking 15th in the conference, earning her a spot on the all-MSC second team. Sophomore setter Victoria Johnson also earned a spot on the all-MSC second team after a season where she recorded 659 assists, which ranked 38th in the NAIA to go along with 45 aces, good for 12th nationally. Also earning postseason honors last season as an all-MSC honorable mention was freshman outside hitter Lauren Galvan after posting the team's second-highest amount of kills with 186.

Outside Hitters/Right Sides
Along with Galvan the Phoenix also bring back Outside Hitters/Right Side's, Isabella Curcio, Sydney Pearce, Maddie Perez, Cheyenne Cory, and incoming transfer from Wallace State CC, Harlee Kate Reid. Outside hitter Isabella Curcio comes back for her third season with the Phoenix after recording 145 kills in 17 matches in the spring for the Phoenix. Sydney Pearce is coming off a solid freshman season in which she appeared in 21 matches and recorded 114 kills. Maddie Perez is also returning after a freshman debut which saw her appear in 23 matches while totaling 146 kills. Also returning is Junior Cheyenne Corey, who played in five matches and recorded 15 kills last season for the Phoenix.

Middle Hitters
The Phoenix are bringing back all their middle hitters from last year, including Nicole Carey, Luciana Arena, Samantha Holguin, and Jenna Hillenbrand. Luciana Arena made an impact in her 2021 sophomore season after appearing in 16 matches and leading the squad in blocks with 11. Samantha Holguin returns for her junior season with the Phoenix after posting 99 kills and five blocks in 26 appearances. Sophomore Jenna Hillenbrand also returns for the middle hitter group after appearing in four matches in the spring.

Liberos/Defensive Specialists/Setters
Along with second-team All-MSC setter Victoria Johnson, Cumberland brings back its starting libero Sadie Edmontson, defensive specialist Shea Moore, setter Bianca Rodriguez, setter Caroline Vicentine and defensive specialists Faith Weitzel and Kelci Williams. Sadie Edmontson is back for her fourth season with the Phoenix after leading the team with 476 digs at an average of 5.1 per set. That mark also ranked her in the top 30 in the category in the NAIA. Shea Moore returns to the Phoenix for her third season after playing in 29 matches and registering 170 digs. Bianca Rodriguez is coming off a solid sophomore season with Cumberland, in which she totaled 326 assists while also recording 28 service aces. Also returning is Kelci Williams after appearing in 27 matches last season in which she tallied 80 digs. Caroline Vicentine is back for her junior season after appearing in three matches last year, along with Faith Weitzel, who returns for her second season following a year in which she played in 9 matches for the squad.

Cumberland starts the 2021 fall season at the Vette City Classic in Bowling Green, Ky., with matches scheduled against Brescia University and Blue Mountain College on Friday, Aug. 20, and two matches on Saturday against #16 Marian University and RV Reinhardt University. If attending in person, the Mid-South is requiring masks to be worn at all times during the event.