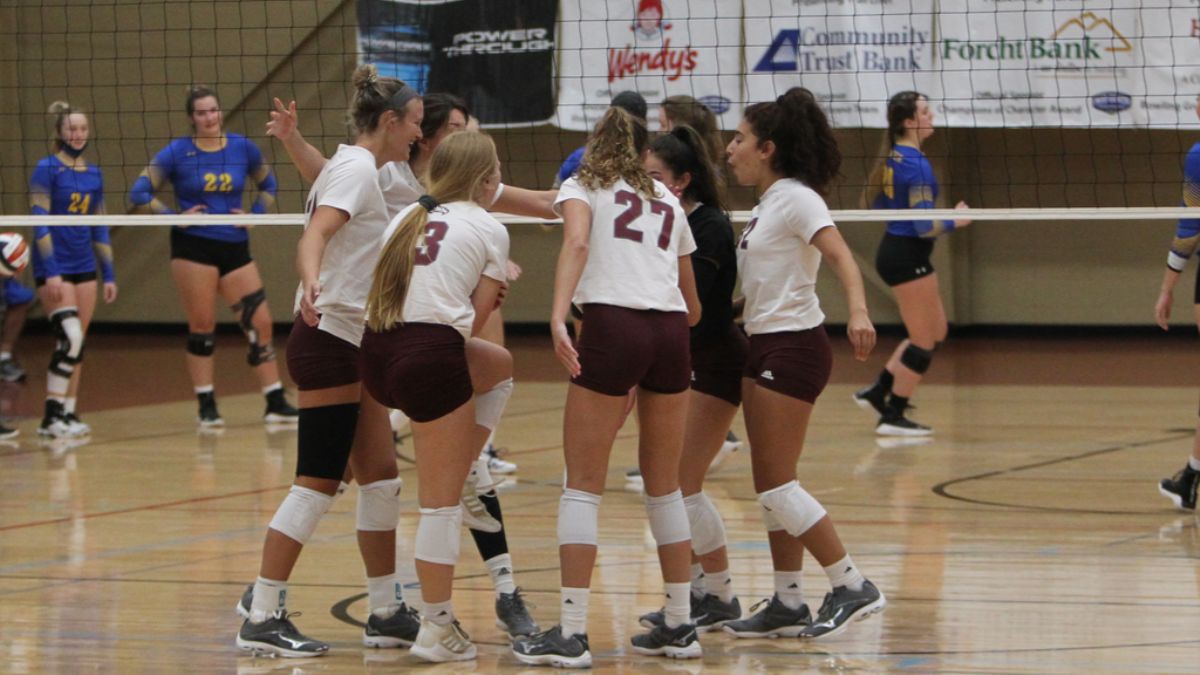 BOWLING GREEN, Ky.--Cumberland women's volleyball made quick work of Brescia sweeping the first game of the season and fought back to erase a 2-0 deficit against Blue Mountain before dropping the fifth set in day one action at the Vette City Classic.

Curcio fired the first point of the season with a kill and the Phoenix built off that momentum to gain a 7-5 lead in the first set. The Bearcats rallied to score seven straight points forcing Cumberland into an early timeout. Brescia built up a 16-11 lead before Cumberland started rallying back in the set. A service error by the Bearcats and two straight aces from Sadie Edmonston to make it 16-14. Brescia was able to get back to a four-point lead at 19-15 before CU surged to take the first set. Four straight points from the Phoenix knotted the set at 19-19. Brescia took a point with a kill, but Maddie Perez and Nicole Carey kills, a block and an ace by Faith Weitzel put Cumberland in the driver seat. Curcio ended the first set the same way it started with a kill to win 25-21.

Cumberland would capture the next two sets and make quick work of the Bearcats in the early match of the day.

In set one, neither team could gain momentum as the two sides swapped points through 9-9. Blue Mountain finally broke through to one a 6-1 run with four Cumberland errors throughout the spread. After a Toppers service error, Cumberland bounced back to go on a 5-1 run with a Maddie Perez kill, a block from Luciana Arena and Perez, a kill from Arena, and a kill from Harley Kate Reid to make it 16-15 Blue Mountain. The Toppers would extend the lead with a 4-1 run to go up 20-16. The two sides would trade points and Cumberland would get three quick ones on an error from the Toppers, a kill by Nicole Carey, and an ace from She Moore to force Blue Mountain into a timeout leading 21-20. The timeout came efficiently as the Toppers would go on to take the last four points and win the first set 25-20.

The Toppers took advantage of Cumberland's mistakes in the second set to go on 7-1 run and get up 11-7. After each team traded off two-point blows. Three Phoenix errors and an ace from Taylor Wright put Blue Mountain up 18-12. A kill from Lauren Galvan and an error for the Toppers put Cumberland back within four, but Blue Mountain would not allow CU to close the gap and took set two 25-18.

Cumberland bounced back with a third-set win. The Phoenix took a three-point lead early after Cheyenne Corey and Galvan each picked up two kills to go up 7-4. Blue Mountain rallied back to tie things at 11-11 before Cumberland took control of the set. A four-point burst gave Cumberland an 18-14 lead before Cumberland closed the set on a 6-1 run to win 25-18.

In the fifth set, the two sides were tied at 2-2, but three straight points from the Toppers and Blue Mountain never looked back. Cumberland managed to keep it within a two-point deficit until 7-5, but Blue Mountain then took off a 6-1 run to go up 13-6 and finished CU off at 15-10.

The team stats for the night cap looked nearly identical as Cumberland posted 55 kills while Blue Mountain registered 56. CU had 21 attack errors to the Toppers 24, and both teams were within one dig from each other. The difference in the match came down to receiving errors where CU doubled Blue Mountain's five errors with 10.

Cumberland will be back in action tomorrow to finish off the Vette City Classic with a doubleheader against Florida College and No. 16 Marian University. Neither game will be on video due to only courts one and four having video access at Ephram White Gymnasium.