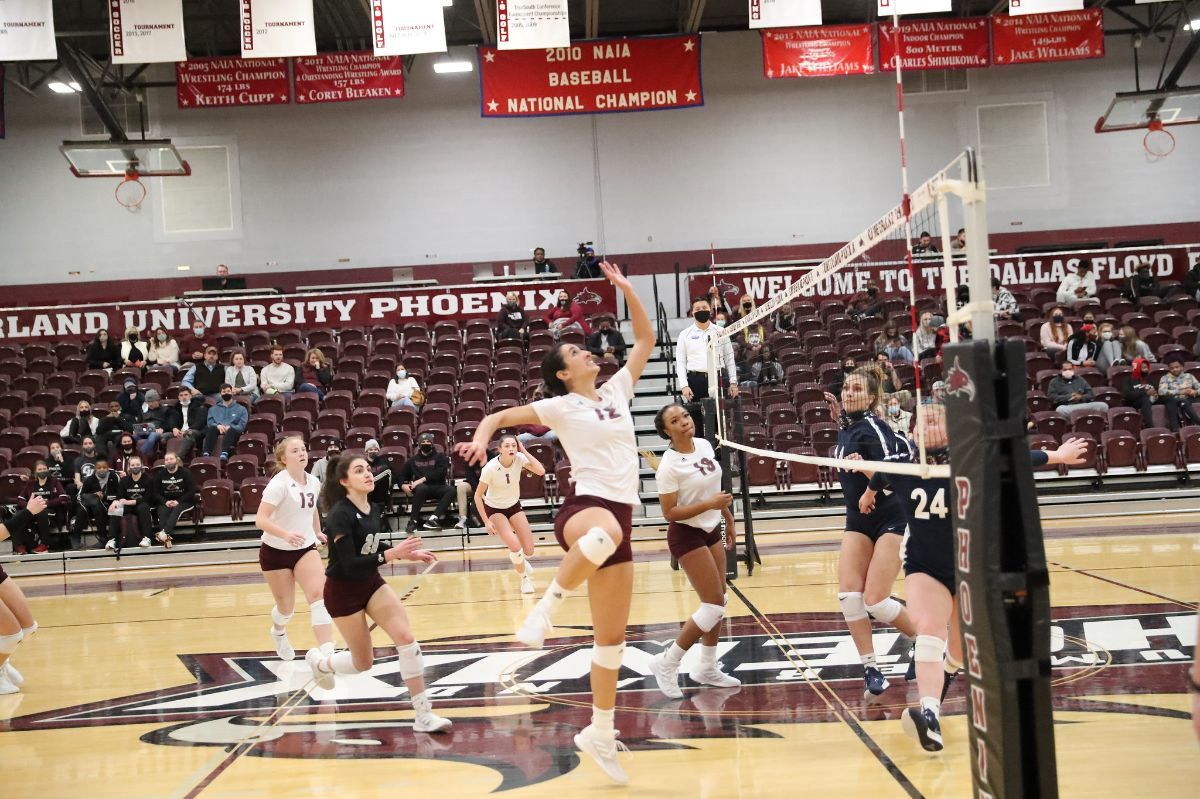 MARSHALL, Mo.-- Cumberland Women's Volleyball puts on a very dominant showing at the Viking Invitational by sweeping all four matches in the tournament after winning 3-0 today against both Williams Baptist University and Stephens College. This weekend helps take the Phoenix to 6-2 on the year.

Cumberland University picked up today right where they left off by putting on a dominant display winning the match 3-0 over Williams Baptist University. Cumberland was lead by huge perfomances from Harlee Kate Reid, Nicole Carey, and Bianca Rodriguez. Harley Kate Reid collected seven kills on ten attacks while also posting seven digs. Carey posted a solid nine kills on a .643 attack percentage and Bianca Rodriguez was able to collect 20 assists.

The Phoenix started out the first set with a 4-1 run on four kills with two of them being from Nicole Carey. After some back and forth action from both sides Cumberland rallied for an 11-1 run to give themselves a huge 17-6 lead over the Eagles. This run was established with the help of four attack errors, one service error, and one ball handling error. Cumberland would go on to win set one by an impressive margin of 25-11.

Set two was very close at the beginning considering all the way up until a 15-12 Phoenix lead, the biggest lead of the set so far had only been two points. Cumberland was able to post a 7-1 run halfway through the set to take the lead to 18-13. From this point on Cumberland was able to wrap up set two on a 25-16 win thanks to two kills by Sydney Pearce and a couple of services aces.

Cumberland jumped out to an early 4-2 lead in set three after Lauren Galvan collected two early kills. The Phoenix did not let up rallying for an 8-1 run to make the score 14-7. Cumberland found themselves in the driver seat for the remainder of the set taking the score to 24-14. Cumberland finished off the match with a big kill from Luciana Arena for a 25-14 set three and a 3-0 Phoenix sweep.

Cumberland showed absolutely no signs of slowing down this weekend by finishing off their fourth 3-0 win against Stephens College. The Phoenix were lead by Isabella Curcio and Victoria Johnson. Curcio finished the match with 12 total kills along with a dig and a block. Johnson was also able to post an all around performance collecting 18 assists, two kills, and five digs.

Set one was neck and neck up until 6-6 when the Phoenix started to gain momentum by going on an 8-2 run taking a 14-8 lead. After that big run there was a few more back and forth point exchanges moving the score to 18-11. Stephens College started to make a push by going on a 5-2 run but it showed no match because they still trailed 20-15 after. Cumberland responded with a 5-2 run of their own to win set one 25-17. Four late attack errors by the Stars is what ultimately helped the Phoenix close out the set.

Set two was dominated early by the Phoenix due to two big runs, the first one being 6-1 and the scond being a 5-2 run resulting in a 17-11 Score. Four attack errors in a row by the Phoenix helped bring the Stars back within reach making the score 17-16. The set stayed close for a little bit longer but Cumberland started to pull away from the Stars with four kills in a row along with the last two Phoenix points coming off of Isabella Curcio kills. The Phoenix would win 25-20 to make the match 2-0 Cumberland.

Stephens College came out looking strong in set number three by leading for a good portion of the start. Stephens even went on a big 5 point run giving them a 16-12 lead. This did not last long though because Cumberland quickly started chipping away and even taking the lead on a 6-1 lead to take back over 18-17. The Phoenix wrapped up set three by scoring six straight points with the last three all being kills by Isabella Curcio. Cumberland won the set 25-21 and took home the 3-0 sweep.