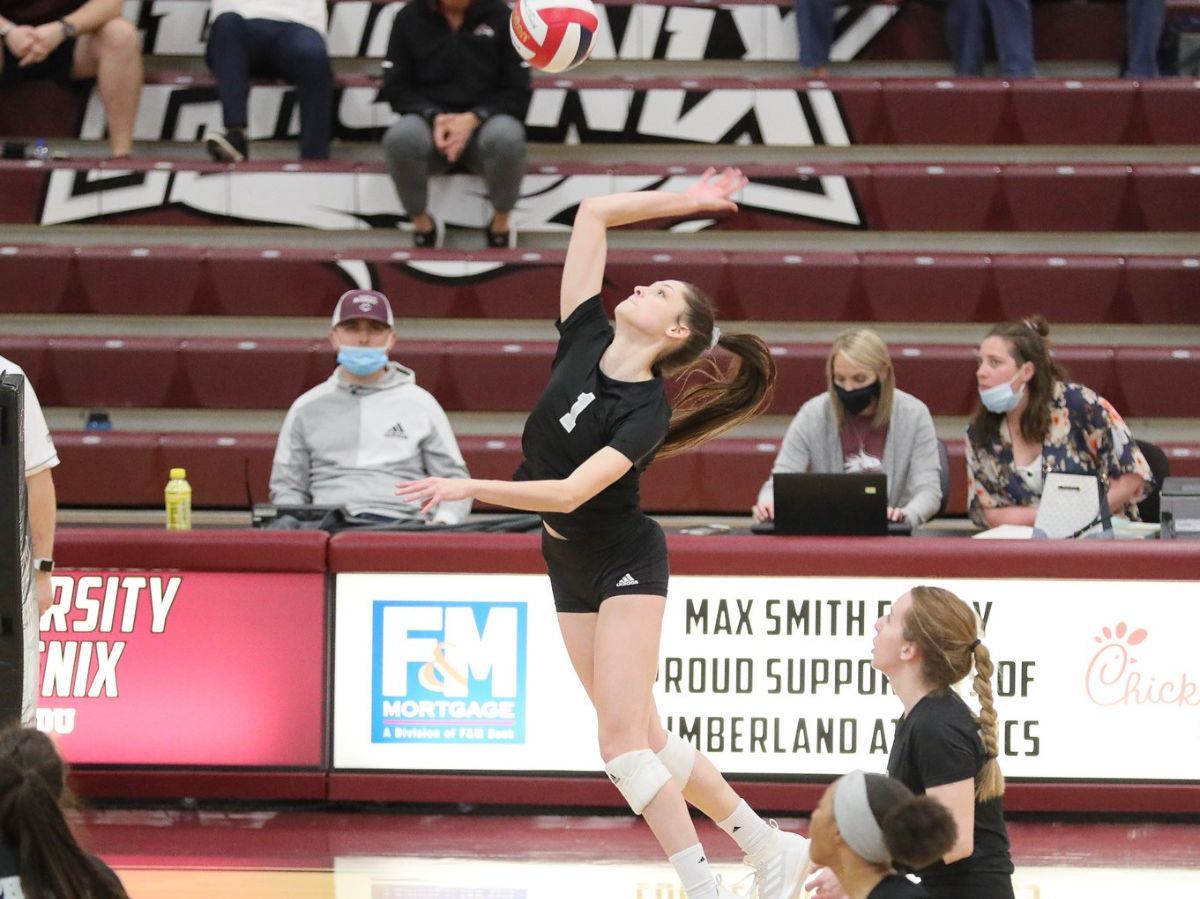 MISHAWAKA, Ind.-- Cumberland Women's Volleyball (10-2, 0-0 MSC) earned a pair of victories over the University of St. Francis and Grace College on day two of the Liz Hossler Labor Day Classic on Saturday.

Cumberland continues their winning streak with a huge 3-0 sweep over the University of St. Francis. The team had a total of nine service aces and posted a team kill percentage of .313. Nicole Carey and Samantha Holguin both put up very impressive attack numbers. Carey tallied seven kills on only nine total attacks while Holguin posted eight kills on 13 attacks. The Phoenix was able to collect 23 more kills than St. Thomas helping them with the sweep.

Cumberland proved to be dominant early in set one against the Fighting Saints. St. Francis was able to get the first point of the set on a service error but the Phoenix instantly took a commanding lead after going on a 9-1 run to make it a 9-2 game. Cumberland recorded a total of five service aces during that 9-1 run. The Fighting Saints started to chip away by going on a 7-4 run and cutting the Phoenix lead down to 13-9. Three attack errors in a row by St. Francis helped seal the deal late in the set for the Phoenix. Despite a few comeback efforts, Cumberland was ultimately able to hold off St. Francis and win the set 25-19.

The Phoenix took a two-set lead faster than you can blink after dominating in set number two. Much like the first set, the Phoenix jumped ahead early thanks to a 5-2 run to start the set. Cumberland continued their onslaught with nine kills going on a strong 12-2 run, forcing the Saints into a timeout with a 17-4 Phoenix lead. Out of the timeout, the Phoenix did not look back, never letting their lead drop below ten points the rest of the match. Cumberland would go on to win 25-12 on back-to-back kills from Nicole Carey to take a 2-0 lead in the match.

Set three was a nail-biter until the very end with a lot of back and forth action. Cheyenne Corey helped get the Phoenix started by recording two of the four early kills in the match giving the Phoenix a 5-2 lead. The Phoenix would follow this up with a 6-3 run thanks to three quick kills by Lauren Galvan. The Phoenix found themselves with a six-point lead but St. Francis answered with an 8-3 run of their own to cut the Phoenix lead to one. Cumberland started to pull away again going up 21-16 but once again St. Francis responded tying the set up 21-21. Three kills and a Service would finally be enough to knock off St. Francis in set three to give the Phoenix a 25-23 win.

Cumberland jumped out to a 6-1 lead over Grace in the first set of the match. The early run included two service aces from Lauren Galvan. The Phoenix run continued after a big swing from Nicole Carey gave the group a 10-4 advantage. Back-to-back kills from Harlee Kate Reid and Lauren Galvan kept Cumberland in the driver's seat with a 17-8 lead. Errors by the Phoenix left the window open for the Lancers with a score of 19-16. The Phoenix held on to win the first set 25-21.

Cumberland was on fire to start the second set with an 8-1 lead over Grace. The Phoenix attack forced the Lancers to make six errors to begin the set. Cumberland continued on their run with a 19-3 lead, their largest set lead of the season. The run included multiple kills by Isabella Curcio, Cheyenne Corey, and Nicole Carey. The Phoenix went on to win the set 25-10 and take a 2-0 lead in the match.

The third set did not go Cumberland's way, however, as they fell 25-10. The Lancer attack started to string some kills together and hopped out to a 12-3 lead. The Phoenix could not put any offense together and trailed 20-4 at one point in the set. The Lancers would go on to win 25-11 and take the match to the fourth.

Cumberland and Grace traded points to start the fourth set leading to an 8-7 Phoenix advantage. The Lancers went on a run of their own to take a 15-12 lead over the Phoenix. The run included four errors by Cumberland. Isabella Curcio's three kills ignited a 6-2 Cumberland run to take a 19-17 lead. Cumberland held onto that two-point lead to win the set 25-23 and the match 3-1.

Isabella Curcio had an excellent performance for the Phoenix in the win with 11 kills and a .276 hitting percentage. Harlee Kate Reid also registered double-digit kills with ten and a phenomenal hitting percentage of .450. Sadie Edmontson led the team defensively with 23 of Cumberland's 60 digs. Bianca Rodriguez totaled the most assists of any member of the Phoenix with 24 on the match.

With the two wins, Cumberland volleyball is currently riding an eight-match into their next contest. The Phoenix next take the court on Tuesday, Sept. 7, in the home opener against Bryan College at 7 p.m.