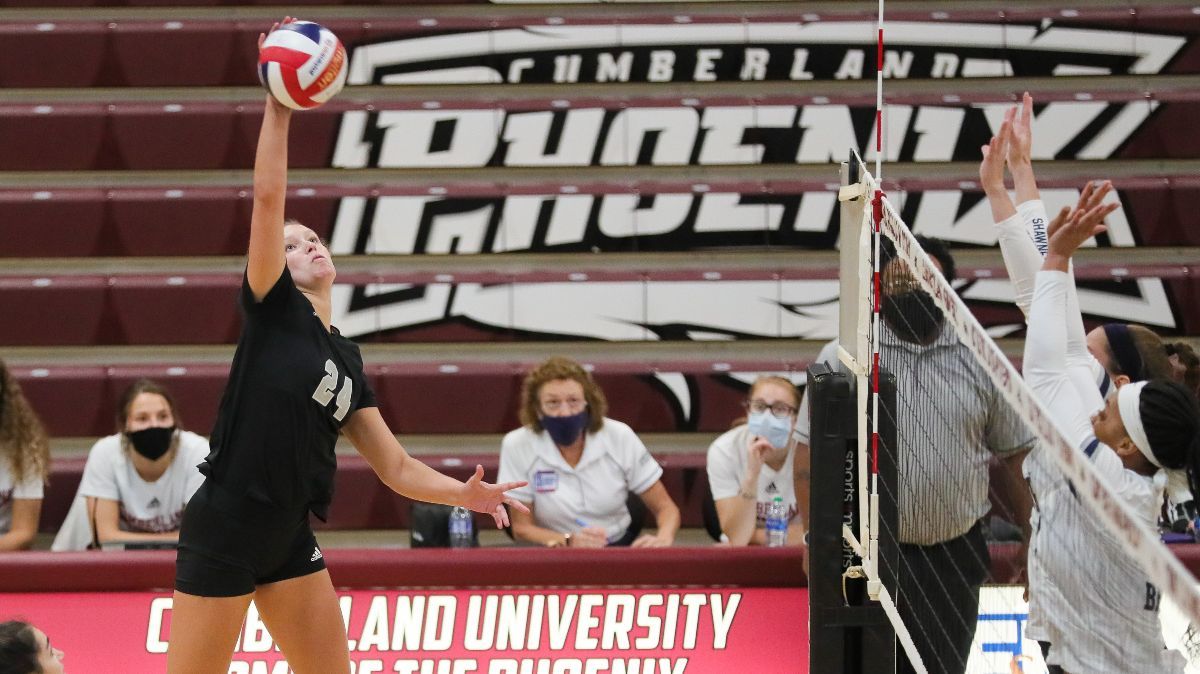 HENDERSON, Tenn.--Cumberland posts a road sweep in the Phoenix first conference away game of the season over Freed-Hardeman University in women's volleyball action Tuesday evening.

Cumberland (13-3, 2-1 MSC) played stellar defense holding the Lions to a hit percentage of .188 to go along with five total team blocks. The Phoenix were able to turn in 44 kills on the match, six more than the Lions, while limiting errors and picking up seven aces.

Nicole Carey and Harlee Reid each posted 10 kills while Reid added eight digs defensively. Luciana Arena added seven kills while Lauren Galvan and Isabella Curcio each had six. Victoria Johnson and Bianca Rodriguez had 19 and 18 assists, respectively. Sadie Edmondston led the team in digs with 20. Edmonston has now crossed 300 digs on the season and currently has the fourth-most digs in the NAIA.

CU jumped up early 3-0 in the first set and stretched it out to a 10-4 lead, but a service error for Cumberland, an ace for FHU followed by three kills for the Lions put them right back in it. Cumberland used a 5-2 run to get some wiggle room as four different Phoenix posted kills while Johnson added in an ace to lead 18-13. The Phoenix worked the lead up to 22-16, but the Lions came storming back with a 4-0 run. After a timeout, CU regrouped and closed out the set 25-23.

The second set started with both teams trading short runs with neither able to pull ahead. Tied at 11-11, Freed-Hardeman went on a 3-0 run, but Cumberland responded with a three-point spurt of their own. After a kill by Humphry put the Lions up by one, Cumberland posted a 7-2 run to take over down the stretch. Reid and Carey both picked up two kills during the spurt to go along with three attack errors for FHU. Two attack errors by the Phoenix cut it to within two, but CU closed out the set with a 4-1 run to win 25-20 and take a 2-0 match lead.

Cumberland had rally from behind in the third set as FHU used a five-point spurt to go up 13-8. The Phoenix proceeded to go on a 7-2 run with Reid, Carey, and Maddie Perez each posting two kills to tie the third set at 15-15. Trailing 19-17, Cumberland closed the match with an 8-2 run to get the road victory.

The win is Cumberland's 13th win of the season surpassing last seasons win total in just 16 games. The Phoenix will be back at the Dallas Floyd Phoenix Arena on Friday to take on No. 20 Lindsey Wilson at 7:00 p.m.