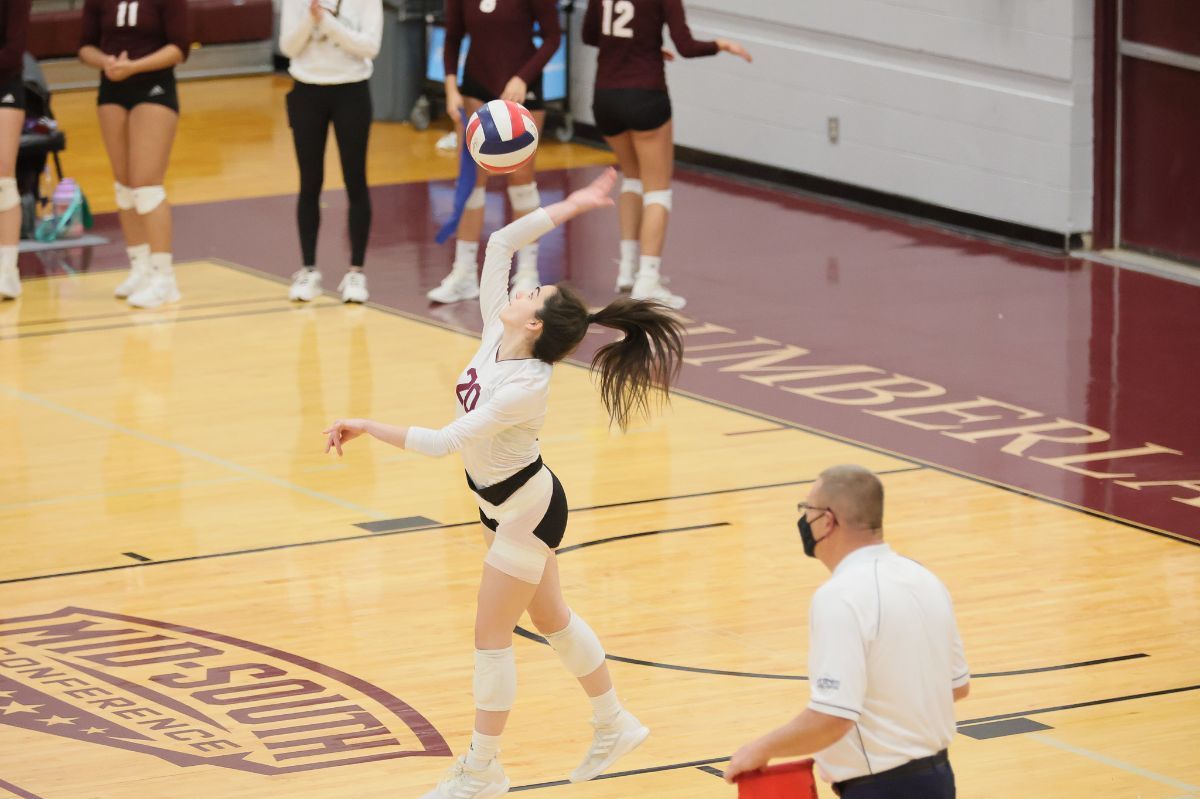 Cumberland began the match in a back and forth affair until a kill by Harlee Kate Reid gave the Phoenix a 6-5 lead. The Blue Raiders then went on a 5-0 run to take a 10-6 advantage over the Phoenix. Cumberland was able to battle back into the set and take a 12-11 lead on a service ace from Reid. The Phoenix lead grew to 20-16 after a big block from Nicole Carey. The Blue Raiders crept back into the set after going on a 6-0 run to take a 24-22 lead. Lindsey Wilson went on to win the set 26-24.

The Phoenix redeemed themselves in the second set after jumping out to a sizable 10-4 lead. The Phoenix continued to expand their lead after a Victoria Johnson service ace brought the score to 13-5. Cumberland left the door open for Lindsey Wilson, and the Blue Raiders went on a big run to trail 22-18. From there, Lindsey Wilson went on to take a 24-23 lead forcing Cumberland coach Hannah Vadakin to call a timeout. Following the timeout, Cumberland scored in the clutch with three unanswered points with back-to-back kills from Isabella Curcio to take the set 26-24.

The two teams traded points to begin the third set until a big kill from Maddie Perez gave the Phoenix some early momentum. From there, Cumberland jumped out to a 10-6 lead after a kill from Harlee Kate Reid. The Phoenix continued on their roll to a 17-10 advantage following a kill from Lauren Galvan. Just like the second set, the Phoenix found themselves up big at 24-16 but allowed the Blue Raiders back into the match. Lindsey Wilson went on a 7-0 run to cut the Cumberland advantage to 24-23, forcing another timeout. After the timeout, Cumberland buckled down and got a much-needed kill from Galvan to win the third set 25-23.

The fourth set began with the two teams playing pretty close. Lindsey Wilson held a two-point lead for much of the set until the 14-12 mark. The blue Raiders expanded their lead to 18-14. The Phoenix went on a 6-2 run capped off by a Sadie Edmontson service ace to tie the score 20-20. The Phoenix had a chance to win the set and the match as they led Lindsey 26-25, but Lindsey closed out the set with a 3-0 run to win 28-26.

In terms of individual statistics, Isabella Curcio led the Phoenix with 17 kills. The other members of the Phoenix with double-digit kills were Lauren Glavan and Harlee Kate Reid, who both had 14. Both Bianca Rodriguez and Victoria Johnson had over 30 assists with 32 and 30, respectively. Defensively, Sadie Edmontson had a solid performance with 27 digs and three service aces.

Cumberland has another test ahead of them with a home bout against 18th ranked Life University on Wednesday, Sept. 22 at 6 p.m.