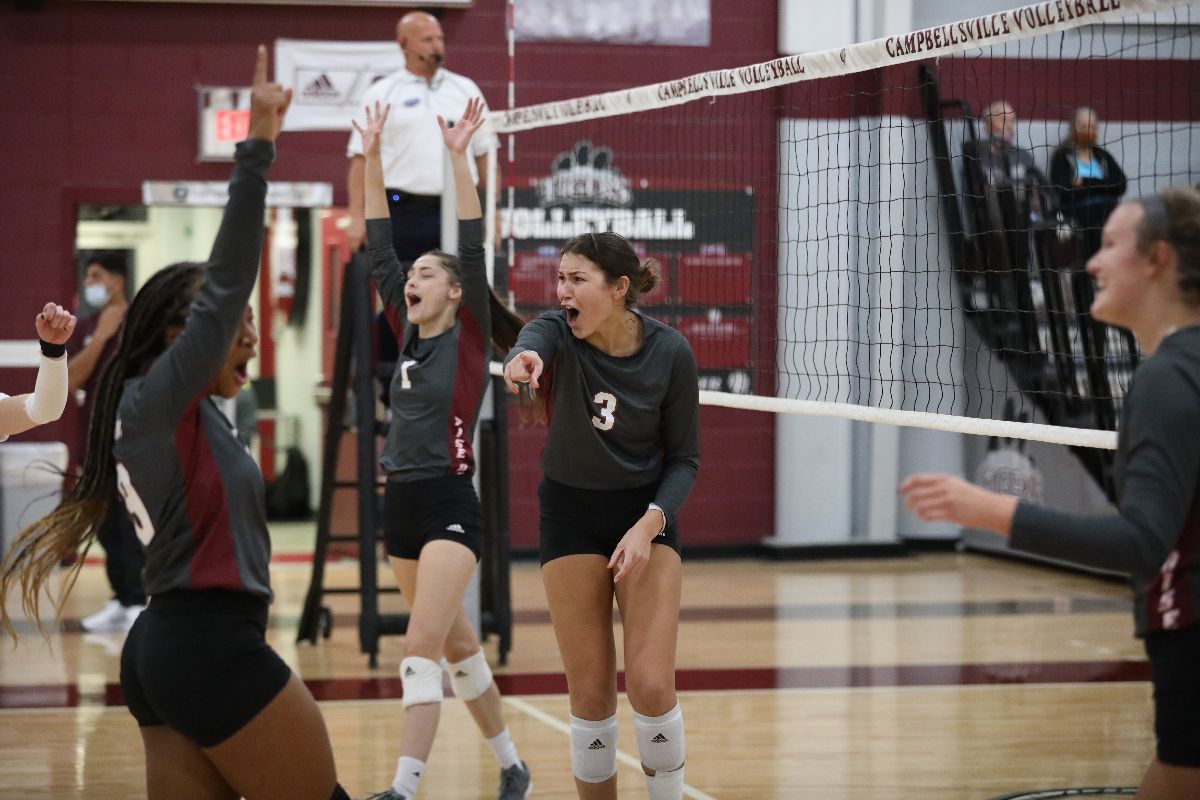 CAMPBELLSVILLE, Ky.--Cumberland went on the road to knock the Campbellsville Tigers off a six-game win streak sweeping the Tigers in three sets at Gosser Gymnasium Tuesday evening.

Cumberland (18-5, 5-3 MSC) dominated Campbellsville on the road this afternoon from the first set as the Phoenix notched a .412 hit percentage in the first set to set the tone. Campbellsville would jump out to big leads early in each set, but the team showed a lot of grit this evening, rallying back in each set to take a lead and close out the match in three sets.

Defensively, the Phoenix back line played solid again led by Sadie Edmonston with 16 digs. Tori Johnson had nine digs while Shea Moore and Harlee Kate Reid each had eight. Cumberland had six total blocks as Carey registered four assists and Curcio had three. Arena had one solo and one assisted block.

Johnson led Cumberland in assists with 20 and aces with three. Bianca Rodriguez notched 15 assists in the match.

Cumberland jumped out to a quick first set lead 5-1 as Arena posted two kills. The Tigers slowly tried to get back in it after a service error from Cumberland to make it 8-5, but the Phoenix exploded for 4-0 run as the Tigers made two errors forcing Campbellsville into a timeout. Three straight points for the Tigers brought it back to 12-8, but Cumberland held on to a four point to 19-15 when the Phoenix closed the set on a 6-1 run to win 25-16.

Cumberland had a great offensive first set with 17 kills on a .412 hit percentage. Pearce posted five kills on the set along with Nicole Carey and Luciana Arena each with three.

Campbellsville started the second set on a 5-0 run. Cumberland came roaring back on a 13-2 run to take over in the second set. On the run, the Tigers had four attack errors along with an ace from Tori Johnson, two kills from Curcio, a kill from Carey, and Pearce. The run ended with a service error and the Tigers would fight back to a two-point deficit.

At 17-15, Cumberland would get a kill from Perez and an ace from Johnson to extend it to a four-point lead, but Campbellsville would go ona 3-1 spurt after attack erros by the Phoenix to cut it to 20-18. The Phoenix would take over the closing points finishing on a 5-1 run, capitalizing on Tigers' errors to win the second set 25-19.

The Tigers would again jump out to an early lead after taking the first six points. Trailing 7-1, the Phoenix's determination brought them right back in it going on an 11-3 run to take the lead. Campbellsville ended the run with three straight points to take a 13-11 lead, but two points from CU tied it right back up.

Tied at 14-14 in the third set, Campbellsville would use a three-point to take the lead. Campbellsville would manage a three-point lead until 20-17 when Cumberland exploded to the finish line. A kill from Harlee Kate Reid and two attack errors tied the match at 20-20. Service errors for both sides made it 21-21, but Cumberland would get a kill from Carey and three-straight kills from Curcio to win the match 25-21.

Cumberland will stay on the road taking on Georgetown on Thursday in Georgetown before heading to the Grace College Tournament.