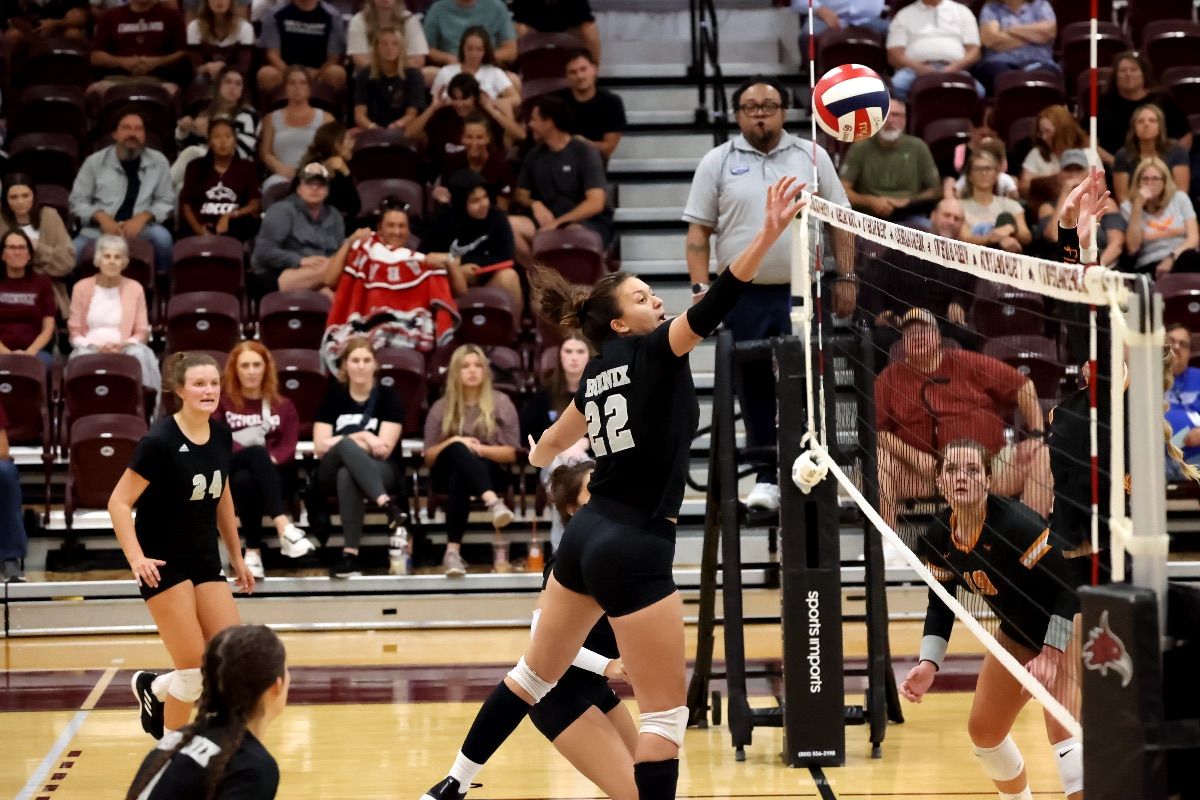 Henderson, Tenn-- RV Cumberland takes down Freed-Hardeman 3-0, earning them their third conference win of the season. The Phoenix were heavily reliant on their middle hitters Hazel Konkel and Luciana Arena, who scored 10 and 9 kills a piece.

Freed-Hardeman was led by Kacey Donegan, who recorded a double-double with ten digs and a match high of 11 kills.

The Phoenix were off to a slow start in set one, despite earning the first point of the game off of a kill from Reid. The Lions went on an early six point run, during which Cumberland recorded three straight attacking errors. Freed ended their own streak with a service error but quickly regained their momentum, going on another run that lasted for four points. Back-to-back kills from Lauren Galvan and Arena tightened the score to a four point game at 19-15. Galvan and Arena then combined for a block and brought the score to the closest it had been since Freed led at 6-3. The Phoenix finished up strong with a huge ten point run, which included three service aces from Bianca Rodriquez. Cumberland took the set with a 25-20 score.

Set two was largely a back-and-forth affair between the Phoenix and the Lions. A four point run at 11-11 led the Lions to the first major lead of the set. A kill from Galvan and two from Konkel brought the Phoenix back from their four point deficit. The Phoenix took their first substantial lead of the set after two back-to-back kills from Arena, forcing the Lions into a timeout. Freed held on to earn a few late-set points, but an unstoppable swing from Reid ended the set in favor of the Phoenix with a 25-22 score.

Cumberland earned an early four point lead in set three, but two attacking errors in a row from the Phoenix as well as a dominant kill from Donegan brought the Lions back up to speed. Arena responded with two shut-down blocks, protecting the Phoenix lead at 10-6. Reid went on a three point serving run that helped the Phoenix expand their lead to eight points. Three mishits from the Phoenix sent the Lions on a four point service run, breaking Cumberland’s lead down to only three points at 20-17. Freed fought back hard to stay in the game and tie the set at 22-22, gaining energy off of a backrow attack from Donegan and a strong block from Jayden Watkins. Konkel registered back-to-back kills from the middle to bring the Phoenix to set point. Cumberland took the set with another score of 25-22, earning them their second clean sweep of a conference opponent this season.

Arena hit an outstanding attack percentage of .615 while Konkel ended the game with a .500 percentage. Shea Moore registered a match high of 14 digs, while Nicole Bott added 19 assists over the three sets.

Cumberland will take on Bethel University in McKenzie, Tennessee this Saturday at 3 pm.