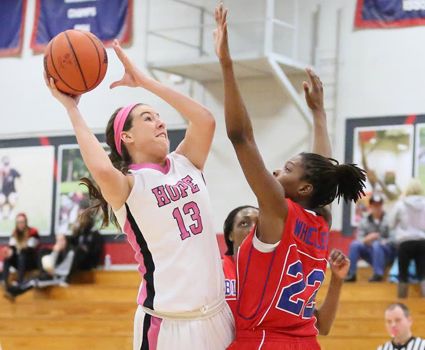 LEBANON, Tenn. – Katie Smith netted 25 points, including 16 in the first half, but Bluefield College used a 25-8 run in the second half to overcome an 11-point deficit and defeat the Bulldogs, 65-60, in women’s basketball action Saturday here at the Dallas Floyd Recreation Center.

Cumberland (9-12, 5-8 Mid-South) scored just one field goal over an eight-minute stretch during the second half, that one by Calamity Jane Coley, who played for the first time since January 11 because of illness, but the Bulldogs made just 1-of-9 shots from the field, 0-of-6 from 3-point range, and also missed four free throws during the stretch, allowing the Rams (11-10, 5-7) to get back in the game after the home team seemed the have control.

Whitney Smith and Tempestt McNeal started the run with a pair of 3-pointers, while Teqa McNeal netted eight points and Asia Wheeler added five during the stretch. Wheeler’s two free throws with 9:17 remaining in the game gave the Rams their first lead of the game at 45-44 and the visitors stretched the advantage to as many as eight later in the period on a Janee Simmons layup.

The Bulldogs answered with layups by Layce Colter and Casie Cowan and a jumper from Smith, her final field goal of the game, cutting the deficit to 58-56 with two minutes remaining. Monique Robson’s layup put Bluefield back ahead by five, but CU could not make field goals even after the Rams continued to miss free throws in the final two minutes. Bluefield was just 5-of-10 at the line during the stretch, but Cumberland scored only four points during that time frame – one free throw each by Colter and Smith and two from Ngodoo Itiavkase.

The Bulldogs played the entire second half with major foul trouble, especially senior TaCouya Allen, who logged 22 minutes in the game and was one of four CU players to foul out of the contest. Senior Casie Cowan also fouled out, but not before one of her worst shooting performances of the season, going just 2-of-17 overall and 0-for-8 from behind the arc.

Simmons led the Rams with 19 points – 14 in the first half – with eight rebounds, while McNeal added 14 points and Wheeler posted 10 points and 10 boards.

Smith hit her first six shots from the field and netted 12 of the club’s first 18 points in the game, but Simmons nearly matched her output, scoring 14 points for the Rams in the opening period, including 12 of the first 16 for Bluefield.

The Bulldogs used a 10-2 spurt midway through the half to take a 21-13 advantage, with Smith hitting a jumper from the corner and Layce Colter nailing a 3-pointer from the top of the key. Smith added two free throws before a Terra Pryor trifecta from the wing put the Bulldogs ahead eight.

But Bluefield continued to chip away thanks to TaCouya Allen picking up her second foul with 9:08 left in the period and Tasia Blue going down minutes later with an apparent ankle injury. CU played the final four-plus minutes of the half with basically five guards on the floor and yet maintained the lead the entire time.

A 3-pointer from Bluefield’s Alexis Grant cut the lead to 23-19, but Smith made her final shot of the period and Pryor had a fastbreak layup. Grant added another jumper for the Rams, but Cumberland took a 27-23 lead to intermission.

Smith was 6-of-7 from the field, missing only from behind the arc, while the rest of the club made just 4-of-18 shots. The Bulldogs started 7-of-11 from the floor but ended the half 3-for-14, committing seven turnovers during that stretch as well. But the Rams were very similar, with Simmons connecting on 4-of-6 shots while the rest of the club made only 4-for-17. Bluefield also committed 12 turnovers in the half.

Cumberland heads to Lindsey Wilson next Thursday and then travels to the University of the Cumberlands and Georgetown College on February 20 and 22, respectively, before ending the regular season at home against Shawnee State and the University of Rio Grande.