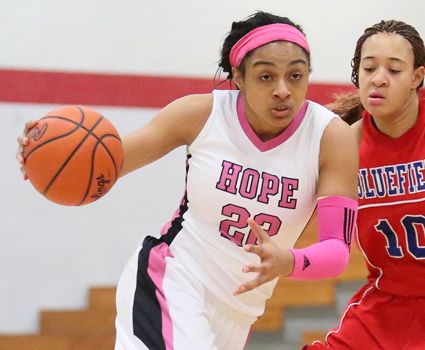 The Bulldogs seemed to have the game in hand in the final minute of regulation despite a three-minute scoring drought, but Layce Colter missed the front end of a 1-plus-1 with 16.5 seconds remaining and CU holding a 54-52 advantage. Lindsey Wilson took advantage and Bre Elder’s layup with 6.7 seconds left sent the game to overtime. Only three total points were scored in the final 3:10 of regulation, none by Cumberland, after TaCouya Allen’s trifecta gave the Bulldogs a 54-51 advantage.

Allen was a workhorse in the loss for CU, registering her third double-double of the season with 15 points and a career-best 14 rebounds along with four steals, but the senior was unable to tie the game in the final seconds of OT when her 3-pointer fell short. Cumberland made just 4-of-18 from behind the arc in the contest, though Allen hit half of that number.

Both teams scored a pair of buckets quickly in the extra period before another lull, but Casie Cowan’s layup in traffic put Cumberland ahead, 60-58, with 1:31 to play. Lindsey Wilson’s ability to crash the glass paid dividends on its next possession, with three offensive boards leading to a second 3-point chance from Martin. This time the freshman nailed the trifecta from the wing, ending a frustrating night for her from behind the arc with a 1-for-8 effort.

The Bulldogs turned the ball over for the third time in the final minute of regulation and overtime on its next trip and Wisener hit both ends of the bonus for a three-point LWC edge. Cowan was the first option for CU after a timeout with 11.8 seconds left, but she was covered, leaving Allen on the wing, but her attempt fell short and Cumberland lost for the fourth straight time, including the last three by a total of 13 points.

Calamity Jane Coley netted 14 points for CU, but her last field goal came at the 11:41 mark of the second half, at which time the Blue Raiders went into a 3-2 zone that shut down the inside game for the Bulldogs. Cowan finished with 12 points and four assists but had another bad shooting night, hitting just 4-of-14 overall and 1-of-5 from 3-point range.

Terra Pryor netted a career-best 10 points and added four rebounds and three steals, making all five of her shots.

Chanel Roberts led the Blue Raiders with 15 points and 10 boards despite playing just 18 minutes because of foul trouble. Elder posted 14 points and Kayla Richardson recorded 10 along with seven caroms and four assists.

The teams played fairly even for the first six minutes of action before the Bulldogs put together a 15-3 spurt highlighted by six points each from Pryor and Coley. Pryor had three layups, two of them slashing to the basket, and added a pair of steals during the stretch, giving CU a 24-15 advantage with 7:19 remaining in the period.

The Blue Raiders responded with five quick points and actually ended the period on an 11-5 run, as Cumberland made just one of its final nine field goals with a pair of turnovers to end the half. Elder knocked down a 3-pointer to end the Bulldogs spurt and Widener’s final pull-up jumper with nine seconds remaining cut the halftime lead to 29-26 for CU.

Coley, Cowan, Pryor and Allen all scored six points in the period, but the Bulldogs shot just 37 percent from the field. LWC was at 33 percent shooting and committed 11 turnovers, leading to nine Cumberland points, and CU dominated in the paint in the half with 18 points.

Cumberland plays again next Thursday at the University of the Cumberlands and heads to Georgetown College on February 22 before finishing the regular season at home against Shawnee State on Feb. 27 and the University of Rio Grande on March 1.