Georgetown shoots Bulldogs out of game on the road 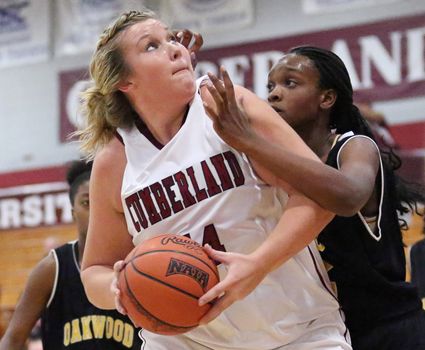 GEORGETOWN, Ky. – Georgetown College shot 75 percent from the field in the first half, building a 23-point lead during the period, and never looked back, as the eighth-ranked Tigers dominated Cumberland in a 79-43 victory here Saturday in women’s basketball action at Davis-Reid Alumni Gymnasium.

Calamity Jane Coley led the Bulldogs (9-15, 5-11 Mid-South) with 14 points, but Cumberland started slowly, missing open shots in the first 10 minutes. The Tigers did just the opposite (19-6, 13-4), hitting everything in sight in the opening period, and used an 18-4 run midway through the half to pull away.

The Bulldogs trailed by 19 points at the break and then made only four field goals in the second half, shooting 13 percent in the period and 23 percent overall in the contest. CU was also out-rebounded 47-26 in the game, though Georgetown missed only 21 shots, netting 60 percent for the game.

TaCouya Allen added a hard-earned 11 points for Cumberland and Casie Cowan continued her recent shooting slump, connecting on just 3-of-15 shots overall and 0-for-4 from 3-point range.

Devanny King led the Tigers with 19 points and eight rebounds and Jessica Foster added 18 points and seven boards, as the two forwards hit jump shot after jump shot from 15-to-19 feet throughout the game. The duo combined to make 17-of-25 shots overall and were the only Georgetown players in double figures.

The Tigers shot 75 percent from the field in the first half and it never really slowed down except for 10 turnovers, which led the seven CU points. Eight players scored for the home team, including eight apiece for King and Foster, who netted all eight of her points during the first five minutes of the game.

Cumberland trailed just 16-10 after Allen’s layup with 12:37 remaining in the half, but Georgetown put together an 18-4 spurt over the next six minutes, highlighted by a trio of 3-pointers from Kourtney Tyra, Mykal Farris and Andrea Howard. GC built the lead to as many as 23 points late in the period, but Allen nailed a trifecta just before the halftime buzzer and CU trailed 42-22 at the break.

Coley scored eight points for the Bulldogs, but the club shot just 31 percent from the field and was never able to stop the home team consistently. Georgetown had 13 assists on 18 made field goals in the period and hit 3-of-5 attempts from behind the arc.

It took the Bulldogs just over six minutes to finally score a field goal in the second half, on Allen’s layup, and Cumberland finished 4-of-30 from the field in the period, continually missing open looks. Georgetown made nearly all of its jump shots and stretched the lead to as many as 37 points with four minutes to play.

Cumberland plays its final two home games of the season next week, taking on Shawnee State on Thursday at 6 p.m. and the University of Rio Grande on Saturday at 2 p.m. Senior Day activities for Casie Cowan and Allen will take place after the game on Saturday.