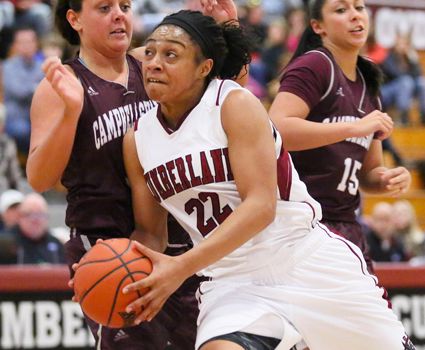 Cowan Casie hit a baseline jumper off an inbounds and after Sheets hit 1-of-2 foul shots, Allen nailed her third 3-pointer of the game, making it a six-point deficit. Priscila Santos missed the front end of a 1-and-1, setting up a Cowan drive to the basket that resulted in a layup plus the foul. The senior made the free throw, making it 77-74 with 12.6 seconds remaining.

SSU’s Abby Feuchter was fouled with 6.1 seconds remaining and she also missed the first foul shot, giving CU one last chance. Cowan dribbled up the sideline and was fouled with 1.4 seconds left. The Bears were not over the limit and Cowan’s final heave front halfcourt hit the backboard but was wide right, ending the Bulldogs chance of making the conference tournament next week with the loss.

Allen finished with 20 points and 13 rebounds, her seventh double-double of the season, while Coley posted 22 points on 10-of-15 shooting and grabbed 11 boards, her first career double-double.

Sheets netted 22 of her 23 points in the first half, making five 3-pointers, and Abbady picked up the slack after the break, collecting 14 of her 20 in the second half. Santos added 17 points, including two jumpers at the end of the shot clock in the final seven minutes.

Both teams started the game with 6-0 runs, but the first 3-pointer of the game for Sheets put the Bears ahead for good with 17:14 left in the first half. The Bulldogs pulled within 13-11 at the 15:17 mark with a trifecta from the wing by Cowan and Allen’s layup three minutes later also made it a two-point game, but Sheets nailed three straight 3-pointers as part of an 11-2 run by the Bears, giving the visitors a 28-17 advantage.

Cowan’s trifecta ended the SSU spurt and Cumberland netted six straight points – four from Coley – and trailed just 33-28 with 6:34 left in the period, but CU did not score a field goal for the next five minutes, missing six straight shots and committing four turnovers.

Shawnee State posted seven points during the dry spell for its biggest lead of the half. Cowan’s 3-pointer from the corner with 11 seconds left in the period cut the deficit to 42-33 at the break, with Coley posting 10 points and Cowan nine for the Bulldogs in the first 20 minutes. Sheets led all scorers with 22 points, hitting 7-of-14 shots overall and 5-for-9 from behind the arc.

Cumberland ends the regular season Saturday with a 2 p.m. home contest against the University of Rio Grande. Allen and Cowan will be honored along with five men’s players as part of Senior Day activities at the conclusion of the women’s game.