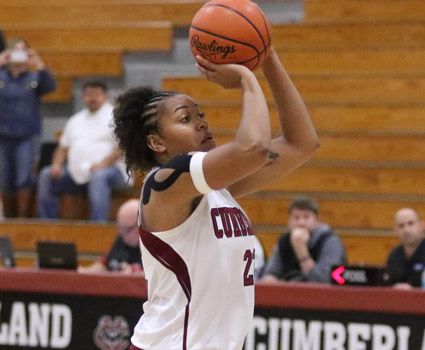 The Bulldogs (9-4) led 32-26 at the half but stretched the lead to 11 with the help with two 3-pointers from Terra Pryor and one by Jazmine Smith in the first five minutes of the second period. The Eagles (7-6) scored the next four points to pull within seven, but Cumberland pushed the advantage to 54-41 with 8:59 to play, the last four points coming on a pair of Shantanique Tolbert buckets.

One free throw from Jalita Fason gave CU a 62-48 lead with 5:47 remaining, but Reinhardt netted the next six points, four by Kateca Favors, who finished with 13 points and 12 boards for the home team. That was as close as the Eagles would get the rest of the way, as Hall nailed her final triple of the game and Fason, Lawson and Hall were a perfect 6-for-6 at the foul line in the final minute to seal the win.

The Bulldogs shot 52 percent from the field in the second half and were 13-for-18 at the foul line in the period as well. Hall handed out five assists in addition to her 30 points, hitting 11-of-18 shots from the field.

Pryor hit four 3-pointers as well for her 12 points while Tolbert posted nine points and eight boards off the bench and Fason added eight points and three assists as well.

Cumberland scored 11 points off nine Reinhardt turnovers in the first half and Hall scored 14 points in the period on 6-of-9 shooting.

The Bulldogs led by a point midway through the opening period before using a 13-5 spurt to open a 28-19 advantage. Pryor’s 3-pointer started the run and Layce Colter added a pair of field goals during the stretch. Tolbert’s two free throws extended the lead to nine with 3:11 left in the half, but Lockhart hit a bucket and then had an old-fashioned 3-point play in the final minute to cut the CU edge to six at the break.

Cumberland does not play again until after the New Year, hosting Martin Methodist on January 6 (6 p.m.) and Tennessee Wesleyan (2 p.m.) on Jan. 10 at the Dallas Floyd Recreation Center.