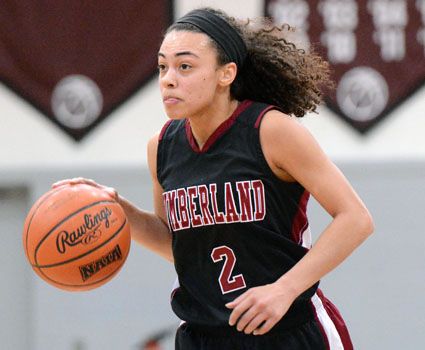 CAMPBELLSVILLE, Ky. – Chelsey Hall netted 23 points with five 3-pointers, but Cumberland started the game just 3-of-22 from the field and was never able to completely climb out of the hole, cutting the deficit to five in the second half before dropping a 68-57 decision to No. 3 Campbellsville University here Saturday in women’s basketball action.

The Bulldogs could not have started much worse offensively, missing short jumpers, runners and layups in the first 15 minutes and hitting just 3-for-22 from the field during that stretch. Hall scored the team’s only points until a layup from Brittany Lawson with 5:05 to play in the period.

The Tigers did not do much better, going 0-for-5 to begin the game but then connecting on five of their next six attempts. Three-pointers from Madison Clements and Emily Fox gave the home team a 14-5 advantage midway through the half. Chelsea Craig’s layup increased the advantage to 11, but Hall knocked down her second 3-pointer of the period the next time down the floor for CU.

The first of three straight field goals by Daizah Kimberland put Campbellsville ahead, 22-10, with 4:11 left in the period, the Tigers biggest lead of the contest, but Cumberland ended the half on a 10-4 run. Tamera Giles got a layup and Shantanique Tolbert hit two layups as well before another trifecta from Hall, the last two from well behind the arc. Kaitlin Oliver made 1-of-2 foul shots with 14.1 seconds remaining, cutting the deficit to 26-20 at intermission.

Cumberland ended the period 8-of-28 from the field but with 11 turnovers, which the Tigers turned into 11 points. Campbellsville helped the Bulldogs with 10 turnovers of its own, eight of those in the last 10 minutes of the half.

Cumberland started slowly again in the second half, with Craig and Lindsey Burd beating the CU forwards down the floor for layups. The Tigers put together a 16-7 run to begin the period, with Burd netting 10 of her 15 points during the stretch. Craig added five and finished with a team-best 21 points, including 7-for-8 at the foul line.

The Bulldogs trailed 45-31 after Craig’s layup with 12:58 remaining and 50-36 on another Craig bucket with 9:20 to play before Cumberland got back into the contest. Kaitlin Oliver, who scored eight points overall and was 6-of-8 at the foul line, started the stretch with two foul shots before a 3-pointer from the corner on the fast break by Terra Pryor.

Hall and Oliver added buckets before two foul shots by Fason cut the deficit to five with 6:59 remaining. Pryor’s layup made it a six-point game again with 3:52 to play, but the Tigers sealed the win at the foul line, scoring just three field goals in the final 7:50.

Fason handed out 11 assists and grabbed six rebounds but really struggled from the field, failing to hit a shot in eight attempts. Tamera Giles led the squad with seven boards.

Cumberland returns home next week for contests against Shawnee State on Thursday at 6 p.m. and Georgetown College on Saturday at 2 p.m. The athletic department will be accepting donations for laundry supplies for the Next Step Resource Center in Lebanon on Thursday and Saturday is Senior Day and the annual Play4Kay game.