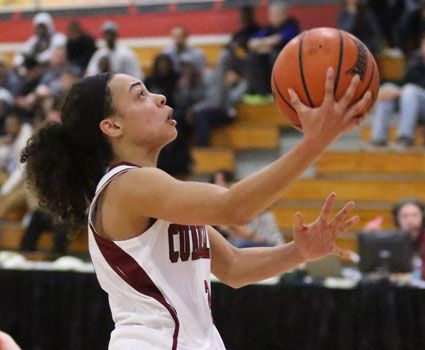 The Bulldogs (13-11, 6-6 Mid-South) missed their first seven shots and committed three turnovers to begin the second half. Jazmine Smith’s baseline 15-footer with 13:20 remaining in the game ended the scoreless streak for CU, but the Bears (18-7, 5-4) had stretched a six-point halftime edge to 17, with Zieverink netting six of the 11 points for SSU.

Cumberland never got closer than 15 points the rest of the way and the Bears stretched the lead to as many as 20 late in the contest. Shawnee State scored 16 points off 15 Cumberland turnovers, with 12 of those in the first half.

Zieverink connected on 14-of-25 shots from the field, almost all within just a few feet of the bucket, and added seven rebounds. Shavon Robinson was the only other Shawnee State player in double figures, finishing with 12 points, while Rebecca Bruner added eight points and seven boards and Tabby McKinney grabbed eight rebounds. Ashley McMurtrey handed out four assists and Abby Feuchter dished out five helpers.

Chelsey Hall led the Bulldogs with 15 points but scored only two after the break, while Jalita Fason finished with 10 points, eight in the second half, and Smith had eight. Brittany Lawson and Tamera Giles each grabbed eight rebounds for CU.

Lawson hit the first bucket for CU and Hall followed with a 3-pointer for a quick 5-0 edge, but the Bears netted the next 10 points and 14 of the next 16. Zieverink and Bruner posted the first eight and McMurtrey’s layup at the 12:32 mark gave SSU a 14-7 advantage.

Zieverink, who registered 14 points in the half, added a layup with 9:36 left in the period for a 20-11 Bears lead, but the Bulldogs scored the next seven points, including a 3-point play from Kaitlin Oliver and two baskets by Hall, cutting the deficit to two.

Consecutive field goals from Zieverink increased the lead back to six and Robinson’s steal and layup made it an eight-point game late in the half, but Hall hit a runner off the glass in the closing seconds to cut the Shawnee State advantage to 30-24 at intermission.

Cumberland plays at home Saturday on Play4Kay day, hosting Georgetown College at 2 p.m. It’s also Senior Day, with five players set to be honored between games of the doubleheader.