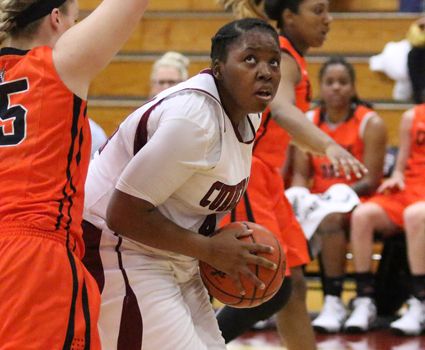 The Bulldogs (15-11, 8-6 Mid-South) shot just 34 percent from the field in the contest, including 2-for-15 from 3-point range, but Tolbert, who played just nine minutes into the contest and was in the game because Brittany Lawson fouled out with 3:36 remaining, caught the Chelsey Hall air-ball and made a layup just before the final horn sounded for the winning points.

The Bulldogs called timeout with 14.7 seconds remaining and the game tied at 48. Jalita Fason tried to drive but was cut off and passed out to Hall, who did get into the lane but her left-handed shot from about 12 feet fell short. All of the Lindsey Wilson (21-8, 9-5) defenders went toward Hall, leaving Tolbert all alone for the final basket.

Tolbert’s offensive rebound with 2:09 remaining led to a foul and the junior knocked down both ends of the 1-and-1, giving CU a 48-46 advantage. Chanel Roberts, who scored a game-high 22 points for the Blue Raiders, hit a baseline jumper with 1:19 to play, tying the contest for the seventh and final time. The game also had nine lead changes, five in the second half.

Freshman Kaitlin Oliver led the Bulldogs with a season-high 12 points and added seven rebounds while Lawson grabbed 14 boards but scored only six points on 3-of-9 shooting. Fason finished with nine points and five steals but made just 4-of-14 shots and Hall had eight points, five rebounds and four assists but also had a tough time from the field, hitting only 3-for-14. Terra Pryor recorded seven points and seven rebounds as well for Cumberland.

Billie Hearn grabbed a team-best 10 rebounds for the Blue Raiders but Roberts was the only LWC player in double figures.

The two teams started the game ice cold, missing six shots apiece before Johnson’s 3-pointer from the corner with 15:48 left in the opening half finally broke the scoreless game. That also broke the ice in the scoring column for both teams, with the club combining for 17 points over the next four minutes.

The Blue Raiders scored eight straight points in the middle of the period, including a 3-pointer and a long jumper from Bre Elder, for a 17-11 advantage. Hearn had an offensive rebound and putback to make it a six-point lead for LWC again, but Oliver’s putback in the final minute cut the deficit to three at the break.

The Blue Raiders shot 30 percent from the field, which was better than CU, and Hearn had four points and eight rebounds. Oliver scored six points for the Bulldogs and Lawson grabbed 11 boards, six on the offensive glass, but Cumberland was just 9-of-35 from the field.

Hall’s free throw at the 17:27 mark of the second half tied the game at 24, the first of seven ties in the final period. Neither team led by more than four the rest of the contest.

Both squads also missed crucial free throws down the stretch, including two apiece by Fason and Hall and three from Roberts, who was just 6-for-14 at the foul line. Jazmine Smith hit a driving layup for the Bulldogs with 12:30 remaining, but Roberts answered on the other end with a layup plus the foul, knotting the score at 33.

Lindsey Wilson took the biggest lead of the second half with a 9-2 spurt over a three-plus minute stretch, with Johnson knocking down two foul shots and a midrange jumper. Roberts added a bucket and three foul shots, the last one with 4:34 to play for a 44-40 LWC advantage.

Lawson’s turnaround from about eight feet ended the run on the next trip down the floor and a steal and layup by Fason tied the contest again with 3:17 to play. Roberts hit another baseline jumper, but Fason answered with a floater on the baseline as well, knotting the game at 46 with 2:47 to play.

That set-up the final four points from Tolbert, her only points of the contest, and the win.

Cumberland opens play in the Mid-South Conference Championships next Thursday, March 5, in Frankfort, Ky. Tournament seedings and pairings will be announced Sunday after the conclusion of all league games.