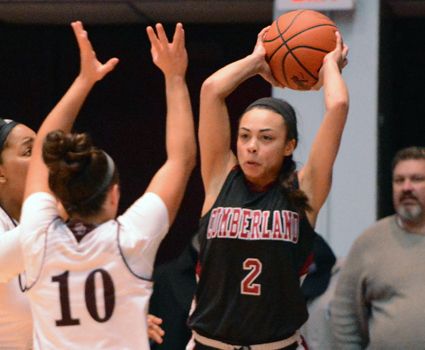 Chelsey Hall passes out of a double team in CU's loss Saturday against Campbellsville. The junior finished with 25 points in the contest. (Credit Richard RoBards)

LEBANON, Tenn. – Chelsey Hall netted 25 points with three 3-pointers, but third-ranked Campbellsville used a 14-5 run to start the second half to break open a close game and post a 52-45 victory over the Bulldogs on Saturday in the semifinals of the Mid-South Conference Women’s Basketball Championships in Frankfort, Ky.

Cumberland must now sit and wait to find out if they will receive an at-large berth into the 35th Annual NAIA Championships set for March 18-24 in Independence, Mo. The final Coaches’ Top 25 poll and qualifiers for the national tournament will be announced at 3 p.m. CT on March 11.

The Tigers (29-2) put together a 24-8 run from the 8:56 mark of the first half to the 12:01 mark of the second period, turning a three-point deficit into a 13-point advantage. The Bulldogs missed their final seven shots and committed three turnovers to end the first half and the struggles continued after intermission, hitting just 2-of-10 with five miscues before a 3-pointer by Hall with 10:55 remaining.

The lead stayed in double figures until Hall’s final trifecta of the game pulled CU within 48-41 with 2:19 to play, but that was as close as the Bulldogs would get.

Cumberland played almost the entire contest without senior Brittany Lawson, who saw just four minutes of action after suffering an ankle injury. The Tigers took advantage on the glass, with Lindsey Burd grabbing 13 rebounds and Kristen Jacob adding 11 caroms off the bench and the duo combining for 12 of the club’s 23 offensive boards in the game.

Jalita Fason was the only other Bulldog in double-digits with 10 points before she fouled out. Cumberland shot just 33 percent from the field but that was ahead of Campbellsville, which finished at 27 percent overall.

Caroline Owen led the Tigers with 12 points, including 6-for-6 at the foul line, Chelsea Craig added 10 points and Madison Clements contributed nine.

Hall scored nine of the club’s first 13 points of the game, with her old-fashioned 3-point play giving the Bulldogs a 13-10 edge with 9:39 left in the first period. Jalita Fason hit the next Cumberland field goal attempt for a 15-13 lead before CU hit the scoring skid, with just one free throw by Hall the last eight minutes of the half.

LeeAnn Grider and Craig each hit one foul shot, Owen connected on one of her two 3-pointers and Burd made her only field goal of the game over the final 7:18 of the period, giving the Tigers a 20-16 advantage at intermission. Campbellsville shot just 7-of-32 in the half but the Bulldogs committed 11 of their 20 turnovers in the first 20 minutes.

Craig netted the first four points of the second half and Owen hit her second trifecta before baskets from Lindey Young, Madison Clements and Daizah Kimberland. Burd made 1-of-2 foul shots at the 12:01 mark for a 34-21 Tigers advantage.

All six of Owens’ free throws came during a five-minute stretch of the second half, helping the Tigers keep the lead in double figures.