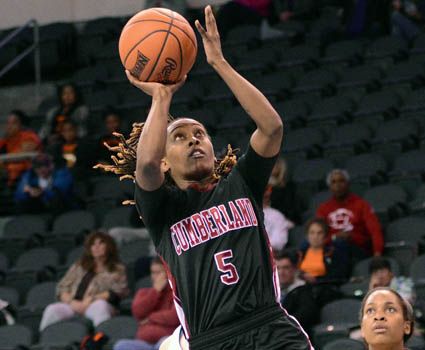 LEBANON, Tenn. – Cumberland shot just 16 percent in the first half and scored only one point in the final 8:30 of the first half, falling behind early and never recovering in a 53-38 loss to third-ranked Westminster College in the 2015 NAIA Division I Women’s Basketball National Championship, presented by Susan G. Komen® Greater Kansas City, in Independence, Mo.

Brittany Lawson led the Bulldogs (16-13) with nine points and Chelsey Hall added seven, but CU hit just 5-of-31 shots in the opening half and 14-of-53 overall. The Griffins (26-2) made 9-of-18 from 3-point range, including five from Amy Krommenhoek, who finished with a game-high 15 points.

Krommenhoek and Shelby Ellsworth each hit 3-pointers and Tia Pappas added a field goal in the opening minutes of the contest for a 10-4 Westminster advantage, but the Bulldogs scored the next seven points. Lawson made two free throws and Hall hit a basket before Terra Pryor made the only trifecta of the game for CU for an 11-10 edge at the 9:06 mark.

Alli Winters answered with a 3-pointer for the Griffins. Jazmine Smith’s bucket with 8:30 remaining in the opening half tied the contest at 13, but Westminster put together a 15-1 run to end the period, with Pappas netting nine of her 13 points in the contest during the stretch. She made a 3-pointer and two foul shots before a pair of field goals around the basket for a 28-14 Griffins lead at the break.

Cumberland was not able to take advantage of eight Westminster turnovers in the opening period, collecting just two points off the eight miscues. The Bulldogs missed their final 14 shots of the half, with Lawson’s free throw the only points for CU.

Ellsworth posted the first two buckets of the second half and Krommenhoek nailed a trifecta at the 17:51 mark, increasing the Griffins advantage to 21. Cumberland never got closer than 16 the rest of the way until the final minute of the game.