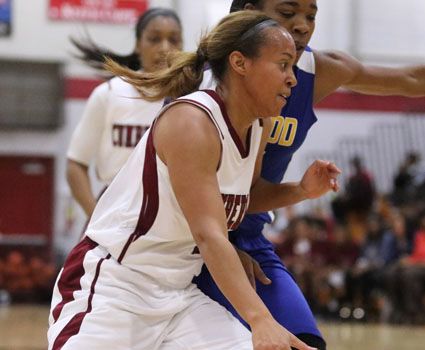 LEBANON, Tenn. – Jazmine Smith scored 20 points off the bench and Chelsey Hall added 16 points, as 12th-ranked Cumberland built a double-digit lead before holding off a furious comeback in a 70-66 win Wednesday night over Talladega College in Talladega, Ala.

Smith hit 6-of-11 shots from the field and was 8-for-9 at the foul line, netting 11 points in the first half. Cumberland held a 33-22 advantage at the break, with Nicole Bowers contributing eight of her 11 points in the game in the opening 20 minutes as well.

CU was ahead by seven at the end of the third quarter and led 62-53 with 4:34 to play before the Tornadoes put together a 10-2 spurt over the next three minutes. Tajanee Wells posted two field goals during the run and Shekeena Benton added an old-fashioned 3-point play. Tatyana Calhoun made the first of two free throws with 1:33 remaining to pull Talladega within 64-63 and Bre Neal fouled Benton on the rebound of the second foul shot.

Benton missed both of her chances at the charity stripe with 1:24 to play and Bowers was fouled on a bucket on the other end, knocking down the free throw for a four-point edge with 1:08 to play. Benton nailed a 3-pointer with 42 ticks left to pull the Tornadoes with one again, but Smith’s field goal with 39 seconds remaining and then 1-of-2 foul shots from the senior with 15 seconds to play were the final points.

Wells netted 15 points for Talladega while Benton and Sasahnique Youngblood each finished with 14.

Bowers posted a pair of field goals and Hall hit one of her three 3-pointers during a 9-0 run in the first period for CU and Smith’s old-fashioned 3-point play pushed the Cumberland lead to 24-13 midway through the second period. Smith added four free throws in the final minute for an 11-point lead at the half.

Smith’s field goal a minute into the third quarter gave the Bulldogs their biggest lead of the contest at 35-23, but Tornadoes responded with a 13-4 spurt over the next four minutes that included a 3-pointer by Benton and two buckets form Jordin Feldman. Julia Fox’s trifecta with 3:50 left in the period halted the run and Hall nailed another triple the next time down the court for CU.

Cumberland plays at Fisk University on Saturday at 2 p.m. before heading to second-ranked Freed-Hardeman next Tuesday for a 5:30 p.m. contest.