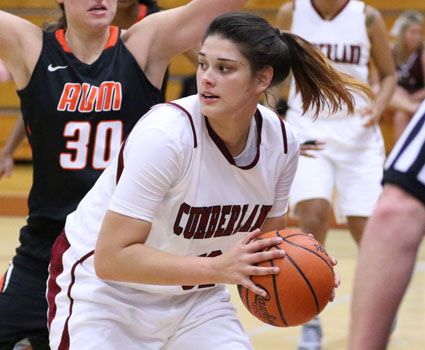 LEBANON, Tenn. – Nicole Bowers posted 16 points and 20 rebounds, Chelsey Hall netted 19 points and 12th-ranked Cumberland ended the game on a 41-16 run in an 84-54 victory over Fisk University on Saturday in Nashville, Tenn.

The Bulldogs hit 10 straight free throws and Jalita Fason added two field goals during the spurt while Fisk was 1-for-4 with three turnovers over the last four minutes of the period.

Khadijah Alexander’s 3-pointer pulled Fisk within 61-50 with 7:40 remaining in the game, but that was as close as the home team would get. Fason netted the next five points for CU and Kaitlin Oliver added a layup before Julia Fox’s trifecta stretched the Cumberland advantage to 73-51 with 5:14 to play, part of a 12-1 run for CU.

Fason with 16 points and six assists and Cumberland outscored Fisk, 40-16, in the paint, but CU also committed 19 turnovers in the contest, which Fisk turned into 16 points.

Cumberland outrebounded Fisk, 60-29, in the contest behind the 20 caroms from Bowers. She scored 10 of her 16 points and grabbed 11 boards in the opening half. Hall hit three 3-pointers and scored 11 points in the first half as well for CU, which limited Fisk to just 26 percent shooting from the field but the home team made 7-of-13 at the foul line to stay close.

Bowers hit the first field goal of the game and Hall netted a 3-pointer the next time down before buckets from Bre Neal and Jazmine Smith finished off a 9-0 run to start the contest. Alexander and Leshae Brown each connected on 3-pointers for Fisk and two free throws by Kimetrice Cox pulled Fisk within 11-10.

Kassidi Freeman posted two field goals and the Bulldogs led 17-13 at the end of the first period.

Hall’s trifecta gave CU a 22-16 advantage, but triples from Scott and Alexander made it a 24-22 contest with 4:13 left in the first half. Bowers added two baskets and Hall nailed her third 3-pointer of the half for the 33-27 edge at intermission.