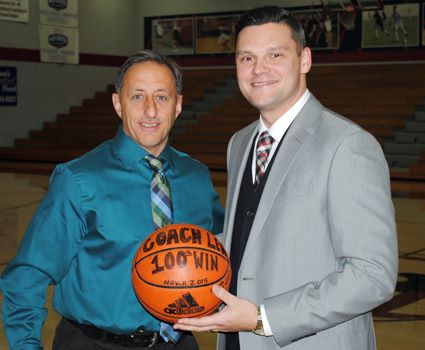 Head coach Jeremy Lewis was presented with a signed basketball before Saturday's game commemorating his 100th win, which he picked up Nov. 11 at Talladega College.
Mid-America Christ. at Cumberland Univ. | November 21, 2015

Cumberland ended a two-game losing streak and has one more gain remaining on a stretch of six games in 13 days when CU hosts Talladega College on Tuesday at 6 p.m.

The Bulldogs (5-2) led 41-30 at the half and put together an 11-0 run in the third quarter after the Evangels (2-3) cut the deficit to eight. Terra Pryor’s 15-footer started the stretch before Neal added a bucket under the basket and Pryor made a layup on the fast break and then nailed her second 3-pointer of the game. Jazmine Smith’s field goal with 4:14 remaining in the period made it 54-35 CU and forced a timeout by MACU.

Cumberland led 60-43 early in the fourth quarter before the Evangels posted an 18-7 spurt led by eight points from Sarai Rodriguez, who hit a pair of 3-pointers during the run and finished with a game-high 25 points. CU was just 2-for-11 from the field and committed five turnovers during the stretch after entering the final period with only two miscues the first 30 minutes.

Smith’s two foul shots with 31 seconds to play pushed the lead back to eight and Chelsey Hall added two more with 13 seconds remaining for the final points.

Kelli Tolar recorded 19 points for the Evangels, 13 of those in the first half. Mid-America Christian shot 48 percent from the field in the game but committed 18 turnovers, which Cumberland turned into 21 points.

Neal posted two layups and Bowers added six points for a quick 12-5 advantage to start the game, but a 3-pointer and two other field goals by Tolar cut the CU lead to 16-14. Tolar hit another bucket and Tierra Brown’s layup gave the Evangels an 18-17 edge at the end of the first quarter.

Fason made two quick jumpers in the lane in the first minute of the second period and Fox added a 3-pointer. Bowers’ 15-footer put the Bulldogs ahead, 26-18, and Kaitlin Oliver’s putback pushed the lead to 31-20 with 5:01 left in the quarter. Rodriguez hit a trifecta for MACU and Tolar added a bucket to make it a six-point game, but Pryor’s three from the corner stretched the advantage back to nine and Neal’s layup put CU up, 36-25.

Fox made another 3-pointer late in the period and Cumberland took a 41-30 advantage to intermission. Neal and Fox scored nine apiece for CU and Bowers posted eight. Tolar led the Evangels with 13 and Rodriguez netted 10, as Mid-America shot 46 percent from the field but committed nine turnovers.