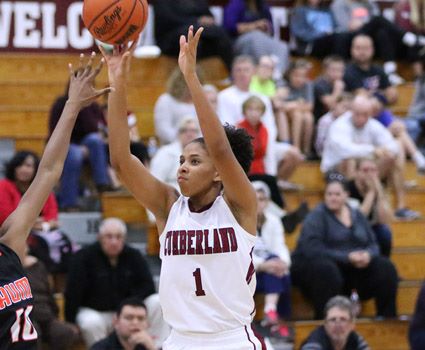 Cumberland (6-2) made just 3-of-17 shots in the opening period and then hit 54 percent (20-for-37) the rest of the game. The Tornadoes (7-2) led by as many as 11 points in the opening minute of the second quarter, but CU outscored the visitors, 21-10, in that period and pushed the lead to double figures in the fourth quarter.

Jalita Fason led the club with 14 popints and added six assists while Chelsey Hall hit 5-of-6 at the foul line in the final period and netted 11 points.

Tajanee Wells paced Talladega with a game-high 17 points and Shakeena Benton posted 14 points, though nine of those came in the first period. Cumberland turned 16 Tornadoes turnovers into 18 points.

Cumberland could not have started the game much worse, hitting just 3-of-17 shots in the opening quarter. Bowers’ jumper with 6:48 left in the period gave CU a 4-2 edge, but the home team made just one shot the rest of the quarter.

Benton provided the bulk of the offense for the Tornadoes, netting nine points in the period, including two layups and a 3-pointer to end the quarter for a 15-6 Talladega lead.

Benton’s layup in the opening seconds of the second period pushed the Talladega advantage to 11, but Cumberland scored the next eight points, with two short jumpers by Fason and a breakaway layup for Terra Pryor.

Wells’ layup and two free throws by Sashanique Youngblood kept the Tornadoes lead at five, but Fason’s pass to Bowers for a layup plus the foul cut the deficit two and two foul shots from Bowers knotted the game at 23 with 1:31 to play in the half.

Fason added two shots from the charity stripe and Bowers baseline jumper gave CU a four-point edge, but Thomesha Smith made a layup in the final seconds for Talladega and Cumberland led 27-25 at the break.

Bowers posted nine points and six rebounds in the half and Fason scored eight points, all in the second quarter. Benton registered 11 points and Wells added eight for Talladega.

The Tornadoes tied the game at 30 on two free throws by Tatyana Calhoun two minutes into the third quarter, but another 8-0 run for CU led by four points from Fason put the Bulldogs ahead, 38-30. Talladega responded with an 8-3 spurt to end the period, with two baskets by Wells and one each from Youngblood and Benton for a 43-40 CU advantage.

Julia Fox made a 3-pointer from the corner to start the final period for Cumberland, her only points of the game, and layups by Fason and Kaitlin Oliver extended the lead to 50-40 with eight minutes to play. Four points by Calhoun and a layup from Youngblood cut the CU advantage to 54-50 with two minutes remaining, as the Tornadoes took advantage of six fourth quarter turnovers by the home team.

Cumberland was 7-of-8 at the foul line in the final 1:44, icing the victory and giving Talladega its second loss to CU this season.