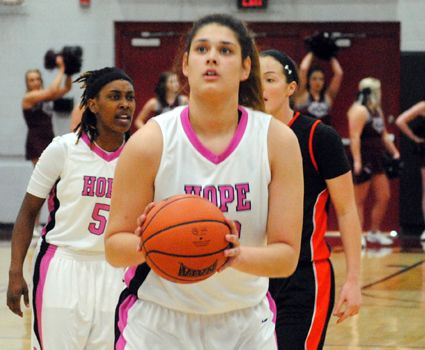 LEBANON, Tenn. – Jalita Fason posted 13 points and Nicole Bowers collected her sixth double-double of the season with 12 points and 12 rebounds, but Cumberland shot just 27 percent from the field and Georgetown made just enough plays to pull out a 50-46 victory in women’s basketball action Saturday at the Dallas Floyd Recreation Center.

The Phoenix committed just five turnovers in the contest and registered an 18-0 advantage in points off turnovers (Georgetown had 22 miscues), but every time CU pulled close, the Tigers made a shot, picked up a loose ball for a layup or Teonia McCune blocked a shot (she finished with six) or grabbed a rebound (15).

Emilie Ziese and Jessica Foster each netted nine points to lead Georgetown (13-12, 8-5) while Lydia Graves and Ashli Mayes both posted seven points off the bench.

Haley Armstrong made a 3-pointer and Ziese a layup to start the game for the Tigers, but an old-fashioned 3-point play from Bowers and 1-of-2 trifectas in the game for Hall knotted the score at six.

Bowers’ layup put CU ahead, 10-7, but Ziese’s layup plus a 3-pointer and another field goal by Foster gave Georgetown a 14-10 edge. Shantanique Tolbert’s turnaround in the final minute made it 14-12 at the end of 10 minutes.

Hall’s layup knotted the score at 16 in the second period before a 6-0 run by the Tigers that includes baskets from Mayes, Kennedy Flynn and McCune put Georgetown back ahead. CU cut it to one with two field goals from Bowers, but a 3-pointer from the wing by Graves with just over a minute left in the half put the Tigers ahead, 25-21, at intermission.

Bowers posted 11 points and 10 boards in the half, making five of the nine shots for Cumberland in the first 20 minutes, while Ziese had seven points and five rebounds and McCune collected 10 caroms.

Cumberland closed to within two early in the third quarter on a layup by Fason, but consecutive baskets from Abbey Van Zant and Flynn stretched the lead back to six. Terra Pryor’s triple from the corner made it 33-30, but Mayes answered with a 3-pointer of her own on the other end and Georgetown led, 36-30, headed to the final period.

The Phoenix could never get closer than three, the first time in the fourth quarter on Bre Neal’s layup with 7:12 remaining, but Ziese picked up an airball and made a layup just before the shot clock expired and Mayes ended up with a loose ball under the goal for another layup, expanding the Tigers lead back to seven.

McCune’s layup with 4:21 remaining stretched the lead to nine, Georgetown’s largest of the game, but Cumberland answered with a 7-1 spurt that included three straight baskets by Fason. The Tigers missed four shots and committed a pair of turnovers during the run, with Fason’s field goal with 1:48 remaining making it a three-point game.

The Phoenix had two chances to get even closer, but Fason and Hall each missed shots before Foster’s field goal with 32 seconds to play put Georgetown back ahead by five.

Fason scored again on a long 2-pointer with 12.5 seconds to play, but Armstrong made two foul shots with 6.8 seconds remaining to essentially seal the win. Hall’s final 3-pointer with 2.0 seconds to play cut the deficit to two before Graves hit two free throws with 0.5 seconds left for the final points.

Cumberland hits the road next week for games at St. Catharine College on Thursday at 5 p.m. Central Time and Campbellsville University on Saturday at 1 p.m. CT.