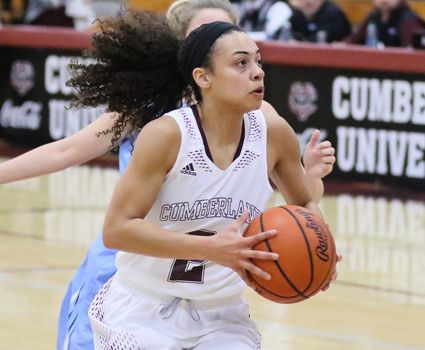 CAMPBELLSVILLE, Ky. – Emily Fox nailed a deep 3-pointer with 10.5 seconds left in regulation and Lindsey Burd netted five of her 28 points in overtime, as fourth-ranked Campbellsville University survived for a 75-70 victory over Cumberland in women’s basketball action here Saturday at the Powell Athletic Center.

Chelsey Hall tied her career-high with 30 points, including 23 in the second half and the extra period, and Jalita Fason added 22 points and seven assists. Fason got a good look from 10 feet after Fox’s tying 3-pointer in regulation, but the jumper off the glass did not fall and the game headed to the extra period.

The Phoenix (15-10, 4-8 Mid-South) scored the first five points in OT – two field goals by Fason and one free throw from Nicole Bowers, who bloodied her nose in the first half but played the final 25 minutes with cotton and tape keeping everything in place.

LeeAnn Grider’s 15-footer and two foul shots by Burd pulled the Tigers (23-6, 10-4) within a point before Madison Stewart’s layup with 1:25 remaining put the home team ahead for good. Burd added one free throw with 32.8 seconds to play but then committed a foul on the other end.

Hall was unable to tie the game, missing the second free throw, and Burd hit two foul shots with 16.7 seconds remaining. Hall’s 3-pointer on the other end was off the mark and Stewart netted two more at the charity stripe for the final points of the game.

Bre Neal collected 13 points and 15 rebounds for Cumberland and Bowers added nine boards. Hall made four 3-pointers and was 11-for-19 from the field overall. The Phoenix dropped to 2-7 this season against ranked opponents, with five of the losses by six points or less and six of the nine contests on the road.

Burd finished with 28 points, 17 rebounds and four assists and Kristen Jacob added 12 points and nine boards before fouling out for the Tigers. Grider and Fox both added nine points apiece.

Cumberland started the game quickly behind a 3-pointer from Hall and baskets by Neal and Fason for a 7-2 advantage. Grider’s 3-pointer from the corner and a bucket by Burd cut the lead to 11-8, but Neal’s turnaround off the glass put the Phoenix ahead, 13-8, at the end of 10 minutes.

Campbellsville made just 3-of-16 field goals in the quarter, but it was Cumberland who went ice cold in the second period.

Neal’s field goal at the 8:40 mark was the only bucket for CU in the quarter until a Fason jumper with exactly two minutes remaining before halftime. The Tigers netted just five points during the scoreless stretch, with two free throws by Jacob tying the game at 15.

The teams traded field goals until Grider’s two foul shots with 26.9 seconds left in the half gave Campbellsville a two-point edge. Fason made one free throw with 4.1 seconds remaining and CU trailed, 23-22, at intermission.