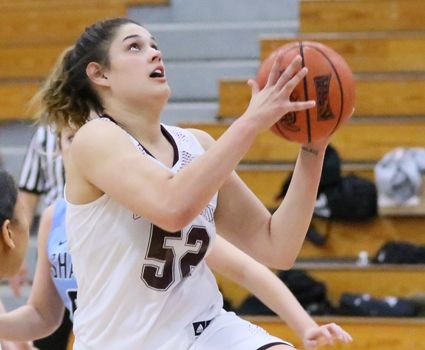 LEBANON, Tenn. – Nicole Bowers made 4-of-6 foul shots in the final 28.7 seconds and posted her second 20-point effort of the season, as Cumberland overcame a sluggish first half to defeat No. 21 University of Pikeville, 62-59, in women’s basketball action here Thursday night at the Dallas Floyd Recreation Center.

Cumberland (16-10, 5-8) improved to 3-7 this season against ranked opponents, with five of the seven defeats by six points or less. The Phoenix did their work on the inside, especially in the second half, with Bowers posting 20 points and 10 rebounds, Bre Neal registering 14 points and nine boards and Shantanique Tolbert adding six points and six rebounds off the bench.

Cumberland trailed by 14 late in the first half and 10 at intermission but started the third quarter with a 13-6 stretch. Bowers netted eight points during the run and Terra Pryor nailed a huge 3-pointer from the wing, the only triple of the game for the Phoenix, pulling CU within, 37-34.

Pikeville (21-6, 7-6) answered with eight of the next 10 points, including a 3-pointer by Aundrea Matchen, who finished with a team-high 20 points, and Dinyell Calvert’s layup with 4:46 left in the period gave the Bears a 45-36 advantage.

Cumberland came right back with the next 11 points and ended the period with an 11-1 spurt. Neal posted an old-fashioned 3-point play and another field goal before Tolbert’s layup on the fast break tied the game at 45 and her two foul shots helped CU take a 47-46 edge to end the quarter.

Neither team led by more than three in the final 10 minutes, with Matchen’s back-to-back field goals giving the Bears a 52-49 lead. Jalita Fason’s tip-in knotted the score at 52 and Tolbert’s putback put Cumberland ahead, 54-52.

Pikeville did not score for more than five minutes, missing four shots and committing three turnovers, until Taylor McGlade’s 3-pointer from the wing gave the visitors the lead again, 55-54, with 2:33 remaining.

Chelsey Hall, who hit just one field goal in the game but was 6-for-6 at the foul line, hit two at the charity stripe with 1:47 to play for a one-point lead and Fason’s drive to the hoop with 1:15 to play pushed the lead to three.

Kandice Porter answered for the Bears with a putback underneath after a Bowers block. Bowers was fouled on the other end on an offensive rebound, making both free throws with 28.7 seconds remaining.

Prisha Rogers netted two foul shots for the Bears with 22.2 seconds to play and Pikeville fouled Bowers before any time ran off the clock. The junior hit 1-of-2 to increase the edge to 61-59.

Devin Conley and Porter both missed point-blank shots for the Bears, who retained possession on a held ball with 11.2 seconds to play. Bowers was whistled for a foul on an inbounds with 8.6 seconds left, but Pikeville was not yet in the bonus and had to take the ball out of bounds again.

Porter fumbled a low inbounds pass with 7.0 seconds remaining, giving Cumberland the ball. Again Pikeville fouled Bowers before the inbounds and she hit 1-of-2. Conley drove to the basket but did not shoot before the final buzzer, preserving the win for the Phoenix.

Matchen posted a double-double for the Bears, grabbing 11 rebounds, while Conley netting 14 points, 11 of those in the first half, and Porter finished with 10. Pikeville committed 18 turnovers, which Cumberland turned into 19 points.

Neal netted the first four points for Cumberland and Pryor added a layup plus the foul for a 7-4 edge, but Pikeville scored six straight points, four by Matchen. Conley’s layup with 1:15 left in the quarter gave the Bears a 14-9 advantage, but Neal added another field goal to cut the deficit to three at the end of the period.

Cumberland shot just 4-of-15 in the first 10 minutes but Pikeville committed seven turnovers.

Two free throws by Julia Fox pulled CU within 14-13 in the first minute of the second quarter before the Bears put together a 13-2 spurt over the next three-and-a-half minutes. Conley made a layup and then a 3-pointer before a turnaround baseline jumper by Porter.

Conley added another field goal and Matchen’s short jumper on the fast break pushed the lead to 27-15, forcing the second timeout of the half by CU head coach Jeremy Lewis.

Bowers’ turnaround in the lane ended the stretch and Hall’s first basket of the game with 1:40 left in the half made it a 12-point game again. One free throw each by Bowers and Neal made it 31-21 Pikeville at intermission. The Bears did not score over the final 2:47 of the period, but CU netted just four points during that stretch.

Cumberland ends the regular season Saturday with Senior Day at 2 p.m., hosting the University of the Cumberlands.