Univ. of Cumberlands at Cumberland Univ. | February 27, 2016
BoxscorePlay-by-Play1st Half2nd Half 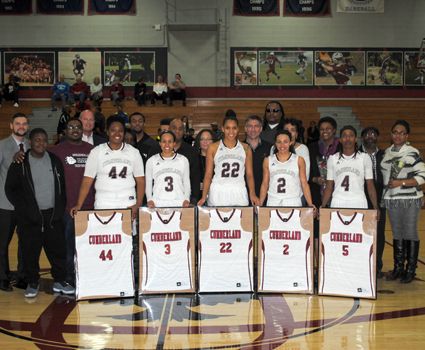 LEBANON, Tenn. – Nicole Bowers posted 21 points off the bench and Jalita Fason collected 18 points, nine rebounds and four assists, as Cumberland jumped out to a 20-point lead late in the first half and held off a feisty University of the Cumberlands squad, 72-64, in women’s basketball action on Senior Day here Saturday at the Dallas Floyd Recreation Center.

UC was whistled for 14 fouls in the fourth quarter, sending the Phoenix to the foul line 23 times, including 10 times in the final 3:25. Cumberland made just six of those attempts, opening the door for the visitors, but two missed shots and a turnover kept the Patriots from getting any closer until LaTeesha DeLoach’s layup in the final minute.

Senior Bre Neal registered 11 points and eight rebounds and Julia Fox made three 3-pointers for nine points. Bowers finished 15-of-21 at the charity stripe after struggling there in Thursday’s win over Pikeville.

DeLoach paced the Cumberlands with 23 points, making 10-of-15 at the foul line. Cheyenne Madden netted 15 points and Ashley Huskins posted 13. Three UC players fouled out and the squad finished the game with just five players.

The teams started slowly, combining for just seven points in the first five minutes of the game and Huskins’ short jumper for the Patriots made it a 10-9 game with 1:44 left in the opening quarter. Fox’s 3-pointer from the wing and two free throws from Fason seconds left in the period made it 15-10 for the Phoenix at the end of one.

Madden’s field goal pulled UC within three in the opening minute of the second quarter before Cumberland reeled off six straight points, including two foul shots by Shantanique Tolbert and baskets from Fason and Neal.

Two free throws by DeLoach cut the Cumberland lead to seven with 6:13 remaining before the half, but a 13-3 spurt from the Phoenix pushed the advantage to 15 late in the period.

Bowers’ two foul shots started the spurt and she added two field goals and another free throw while Fason scored two buckets for a 35-17 lead with 2:39 before the break. Jazmine Smith’s drive down the baseline increased the advantage to 20 late in the quarter before one free throw and then a 3-pointer by Huskins made it 39-23 CU at intermission.

Fason made 5-of-11 shots overall for 13 points in the half and Bowers added 11 points off the bench. The Patriots connected on 7-of-23 field goal attempts while each team committed nine turnovers in the first 20 minutes.

Cumberland maintained the double-digit lead throughout the third period, putting together a 12-4 spurt late in the quarter to stretch the lead back to 20. Smith and Neal each netted field goals before Fox hit a pair of 3-pointers, the last one with 3:00 remaining, the final field goal of the contest for CU.

Bowers’ two foul shots made it 56-36 with 2:31 left in the period, but the Patriots scored the final seven points of the quarter, including two free throws and a basket by Madden and jumper from Essence Grey.

Cumberland plays Thursday in the Mid-South Conference Championships against a yet-to-be-determined opponent. Check GoCumberlandAthletics.com for information on the tournament starting Sunday.