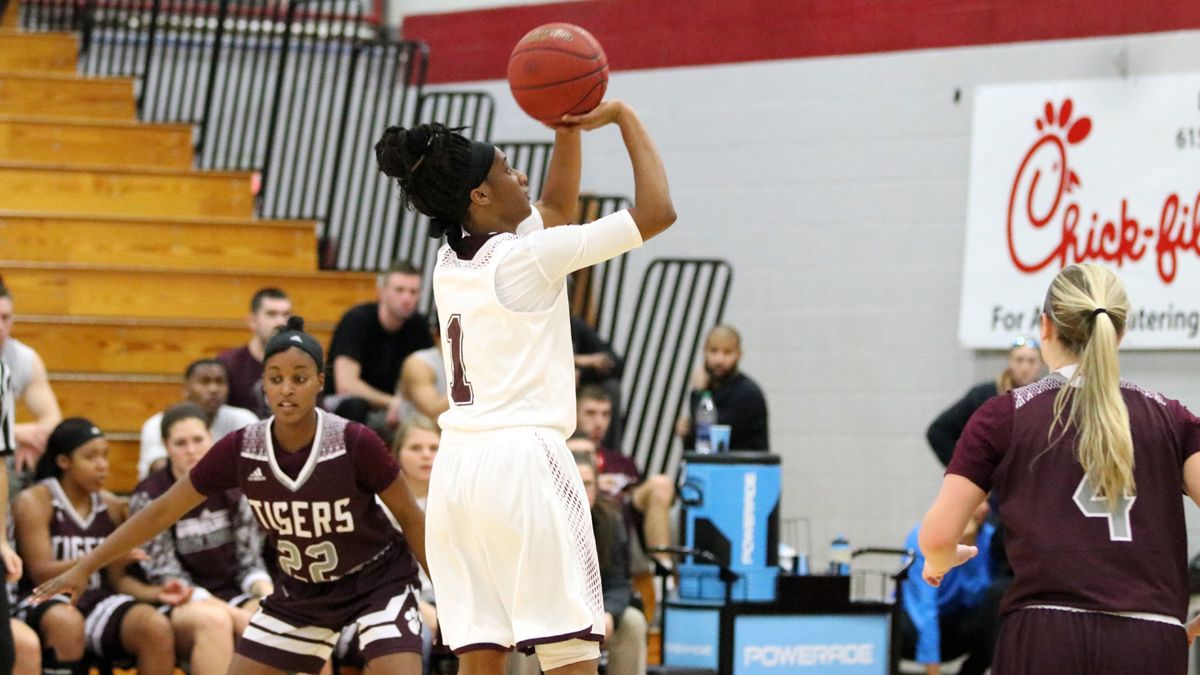 Taliah Moore takes a jumper in Saturday's 76-67 loss to Campbellsville. The senior posted her third straight double-double with 13 points and 11 rebounds. (Credit Jordan Alves)
#8 Campbellsville U. at #15 Cumberland Univ. | February 04, 2017

LEBANON, Tenn. – Eighth-ranked Campbellsville University started the game with an 11-2 run and the third quarter with a 12-2 spurt and shot 55 percent from the field for the contest in a 76-67 victory over 15th-ranked Cumberland in women’s basketball action here Saturday at the Dallas Floyd Recreation Center.

Campbellsville could barely miss in the first quarter, hitting 10-of-13 shots to take a commanding 23-11 advantage. The Phoenix (15-6, 4-5 Mid-South) answered with a 22-6 stretch in the second period, taking a 33-32 advantage, but the Tigers netted eight of the final nine points in the quarter for a 40-34 lead at intermission.

Campbellsville then put together a 12-2 run to start the second half, including five points from Emily Fox, who scored 11 of her team-best 16 points in the final two quarters. She finished 6-of-10 from the field with four 3-pointers.

One free throw by Jordan Doram gave the Tigers a 52-36 lead with 6:30 left in the third period.

Janisha Lindsey hit a 3-pointer to end the third quarter for CU and Nicole Bowers’ layup plus a free throw to open the final period cut the deficit to 58-48. Jailen Murphy also nailed a triple from the left wing early in the fourth quarter, getting Cumberland within nine, the closest it would come until the final seconds.

Campbellsville answered with an 8-2 mini-spurt, including two 3-pointers by Fox. Madison Stewart added a basket during the stretch and posted 15 points and five rebounds in the victory for the Tigers. Lauren Taylor and Doram both finished with 14 points as well.

Bowers collected 17 points and seven rebounds for the Phoenix and Taliah Moore recorded her fifth double-double of the season and third straight with 13 points and 11 boards. Lindsey netted 14 points with six assists but also four turnovers, a major issue for Cumberland in the contest. CU tallied 16 miscues, which Campbellsville turned into 18 points.

Bowers scored the first basket of the game, but it took her three tries on the first offensive possession for CU. The Tigers netted the next 11 points, including six points by Turner and a short jumper and 3-pointer by Stewart.

The Phoenix committed six turnovers and made only 4-of-14 shots in the period and trailed 23-11 at the end of 10 minutes.

Cumberland finally started attacking the Tigers zone in the second quarter, putting together a 22-6 spurt to take the lead. Julia Fox made one of her four 3-pointers to start the run and added another after layups by Cydney Goodrum and Lindsey.

Moore and Bowers combined for the next seven points and an old-fashioned 3-point play by Bowers with 3:38 left in the quarter put CU ahead, 33-32. Lexxus Graham drilled a 3-pointer for the Tigers to end the stretch and Doram hit one foul shot and then a layup underneath for a 40-34 edge at the break.

Madison Clements collected a pair of layups and Fox added a layup and a triple in the 12-2 spurt to start the second half for Campbellsville. Cumberland fought an uphill battle the rest of the contest.

The Phoenix hit the road next Thursday for a 6 p.m. game at fourth-ranked Lindsey Wilson, which starts another three-game road swing for Cumberland.