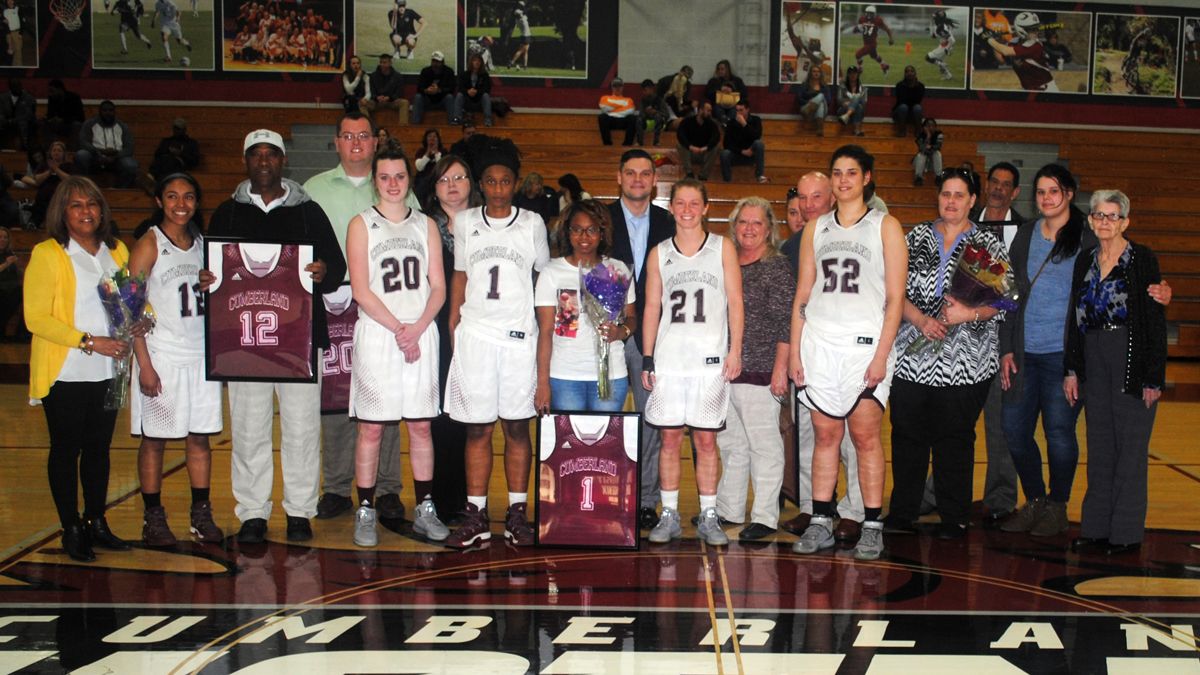 Five Cumberland seniors were honored along with friends and family after Saturday's game against Shawnee State.
#5 Shawnee State at #19 Cumberland Univ. | February 25, 2017

LEBANON, Tenn. – Nineteenth-ranked Cumberland overcame a 17-point halftime deficit and had the ball in a tie game with 44.7 seconds remaining, but the Phoenix could not pull off the upset, dropping a 72-69 decision to fifth-ranked Shawnee State in women’s basketball action Saturday at the Dallas Floyd Recreation Center.

The Phoenix trailed 43-26 at the half thanks to 4-of-19 shooting in the opening period as well as the Bears (28-2, 13-1) hitting 56 percent from the floor in the first 20 minutes. But seniors Julia Fox and Terra Pryor combined for 17 of the team’s 25 points in the third period, fueling the comeback.

Fox nailed a 3-pointer, one of four in the game, and Taliah Moore hit a layup to start the final period, knotting the game at 56. From there the team’s went back-and-forth, with Shawnee State holding no more than a three-point edge over the final nine minutes.

Ashton Lovely’s triple with 1:31 remaining gave the Bears a 68-65 edge, but Fox answered with another three for the Phoenix only 15 seconds later. SSU’s Jonessa Moore missed on the other end and Cumberland called timeout with 44.7 seconds to play.

Fox was fouled with 36.8 seconds remaining and made 1-of-2 foul shots, but Bailey Cummins connected on two free throws for the Bears with 29.2 ticks to play for a 70-69 lead. Cumberland committed a turnover on offense and Lovely hit the final two foul shots for Shawnee. Pryor’s heave from 35-feet at the buzzer hit the backboard, sending CU to its sixth straight loss.

Fox netted a career-best 24 points on 7-of-14 shooting, adding four rebounds, three assists and two steals. She also hit 6-of-8 at the foul line, but both misses came in the fourth quarter where Cumberland missed five of its 11 attempts at the charity stripe.

Lovely paced the Bears with 18 points and Jonessa Moore posted 15 points and seven rebounds before fouling out, part of 49 fouls and four technicals whistled in the contest.

Cumberland could do little right in the first half, especially the first quarter, missing layups, runners and jump shots. Even with those issues the Phoenix trailed just 14-8 midway through the period after two free throws by Cydney Goodrum.

Hannah Miller netted the final five points of the quarter for SSU for a 24-12 lead at the end of 10 minutes.

Shawnee State stretched the lead to 18 in the second period behind four points from Jonessa Moore and a pair of 3-pointers by Lovely, who did not play in the first matchup between the two teams last month in Portsmouth.

Oliver and Griffith combined for seven points in the period for Cumberland, including a 17-footer from Oliver just before the halftime buzzer, but Lydia Poe scored a pair of field goals and Miller added a layup for a 43-26 advantage at intermission for the Bears.

Pryor hit a 3-pointer and then made a steal that turned into a layup to begin the third quarter and Fox nailed a triple to cut the deficit to nine, but Jonessa Moore and Brandie Snow answered with baskets for SSU.

The lead remained seven until a Fox 17-footer with just over three minutes left in the period and one free throw apiece by Fox and Pryor late in the quarter cut the deficit to five heading into the final 10 minutes.

Cumberland plays in the Mid-South Conference Championships beginning Thursday in Frankfort, Ky., against a yet-to-be-determined opponent. Tournament bracket and game times will be announced Sunday by the league office.